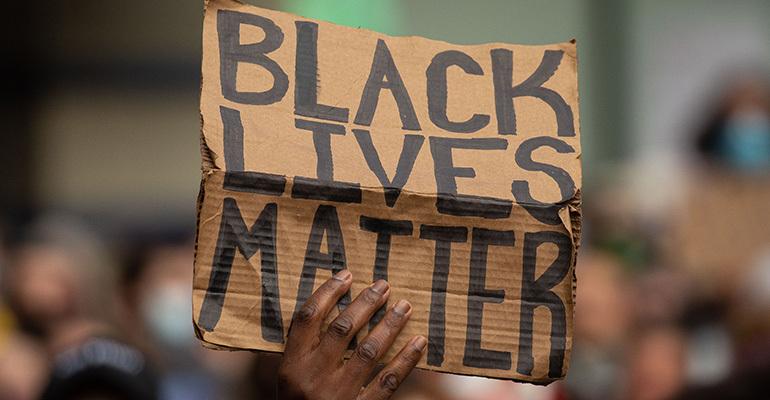 David Ryder / Stringer /Getty Images News
Restaurants have been careful in responding to the protests against police brutality.
People

As the protests against police brutality continue nationwide, restaurant operators are struggling to navigate the complex conversation about racism while attempting to capture the momentum and elicit real change.

Over the past couple of weeks, several restaurant companies — from independent operators to Starbucks — have faced public criticism in social media about their responses to the Black Lives Matter movement, making it clear that consumers are taking note and holding brands responsible for both past actions and current policies.

This could be why restaurant operators have hesitated to do more than send out brief, generalized statements decrying racism and supporting equality.

Last week, for example, chef Scott Schroeder stepped down from the Philadelphia restaurant he cofounded, The Hungry Pigeon, after posting what was perceived to be racist stereotypes on social media. In Chicago, the restaurant Fat Rice closed after co-owner Abe Conlon was denounced by former employees for racist remarks and verbal abuse. Conlon later apologized for reinforcing a “culture of hostility and oppression.”

Most recently, Starbucks walked back its policy of not allowing employees to wear Black Lives Matter insignia as part of their dress code policy, despite encouraging them to wear buttons and pins for Pride Month. Starbucks declined to speak further on the matter, but in a letter to employees published less than 24 hours after the original internal memo to managers leaked to the media, Starbucks Chief Operating Officer Roz Brewer, Executive Vice President Rossann Williams, and Vice President of Inclusion and Diversity Zing Shaw said that Black Lives Matter insignia would be allowed and that the company would be designing their own anti-racism T-shirts to “demonstrate allyship.”

So how do restaurant companies walk the fine line of acknowledging past missteps without condemning themselves? And how do they show support for a movement against racism without putting their foot in their mouth or appearing too neutral?

The answer is complicated. For companies like New York City-based Union Square Hospitality Group, it begins with a clean slate.

Union Square Hospitality Group announced last week that it would be completely dissolving its diversity-and-inclusion council that was formed in 2017 and will be hiring external experts to create a new set of internal guidelines and practices for employees and managers.

It’s an issue the multi-concept group has been thinking about for some time. The company was sued in 2019 by a former non-gender-conforming employee who quit after being required to wear masculine clothing, including a tie.

“The diversity council we had was primarily focusing on programming of education and awareness, and while that’s the right idea, we thought it was insufficient,” said Chip Wade, Union Square Hospitality Group president. “What we know and what we have learned is that we’re not experts. As a Black male, I’m not the expert on diversity, inclusion and bias training […] We hope this is a multiyear and multiprong diversity and inclusion journey for our company.”

This process, Wade said, will hopefully result in a more diverse leadership and executive team, a new-and-improved orientation and training program for new employees around inclusion and bias, and devoting more time and money to causes that fight social injustice.

“For us, it’s important to take this holistic 360-degree approach to diversity,” said Wade. “It begins with our employees and leaders as the first stakeholders, but also extends to our guests, community, suppliers and investors.”

The idea of supporting diverse communities by partnering with Black vendors, investors and organizations that support Black interests strikes a chord with Donna Moodie, a Black entrepreneur and owner of Marjorie Restaurant in Chicago.

“Invest in the community you want to stand up for, seek out vendors and subcontractors who support that mission, and make your actions at the forefront of your business rather than flavor of the week,” Moodie said. “Let your employees know what you’re doing, get the message loud and clear and don’t be ambiguous about your commitment to it.”

Several national chains have taken this strategy by financially supporting organizations that invest in the Black community, including McDonald’s, which pledged funds to the NAACP and National Urban League.  Wendy’s has also committed to donating $500,000 to support “social justice, the youth and education in the Black community starting with the Thurgood Marshall College Fund.” And Yum Brands Inc. is donating $3 million to the NAACP Legal Defense and Educational Fund and American Civil Liberties Union.

But, according to Moodie, it’s equally important to support Black communities and upward mobility within your own company as it is to support external causes, and that change should come from within.

“We’re seeing a lot of corporations and chains that put out statements [supporting diversity] that don’t represent their board and higher paid positions,” Moodie said. “They need to encourage people to advance and gain more experience from within.”

Unfortunately, racial divides within the restaurant industry still exist, and it takes having painful conversations — and learning how to address your own biases — to overcome them.

“We have a culture where its hard for people to admit when they’ve made mistakes,” Angela Stowell, CEO of FareStart, a Seattle-based nonprofit organization that provides job training for homeless and other disadvantaged people, said.  “The restaurant industry has been notorious for many years for front of the house and back of the house racial disparities and we have a tipping culture founded out of slavery that has some people making more money than others.”

After having those tough conversations, the best place to start is by giving diverse communities employment and promotion opportunities, said labor lawyer Sally Culley, a partner in law firm RumbergerKirk, who adds that intention is crucial.

“A lot of people think it will work itself out, like ‘Oh, they will start at the bottom and work their way up through the company on their own,’ which is not taking into consideration the fact that people have known biases and you’re not taking steps to ensure it’s not factoring into the process of who’s hired and promoted,” Culley said.

Yum Brands is also addressing concerns about bias. This year James Fripp, chief diversity and inclusion officer at the parent to Taco Bell, Pizza Hut, and KFC, decided to introduce new diversity and inclusion commitments. The company has been rolling out unconscious bias training — which they call inclusive leadership — at both the corporate and store levels.

Fripp said he realizes that within the pipeline of success, people are going to promote people they know and are familiar with, and that’s where unconscious biases come into play.

In January, he had the idea of inviting senior-level employees of color to have dinner with Yum CEO David Gibbs, who hosted 20 of those workers at his home for dinner. They spoke about how to better build careers for Black, Latino, Asian and other employees of color.

“A lot of times companies try to solve diversity and inclusion problems by science, meaning we’re going to hire X number of this or that type of person,” Fripp said. “For me, it’s not about the numbers; it’s about the art, and the art is authenticity, which leads to relationships, which leads to trust. If we solve for the art, the numbers will come. People sponsor and support and promote people they know and trust and have relationships with. We’re trying to work diligently to build that.”

That work has become even more important as the Black Lives Matter movement takes centerstage in America, Fripp said.

Although their unconscious bias training was already in effect by the time coronavirus and the subsequent resurgence of the Black Lives Matter movement hit the country, he said that they have since been redoubling their efforts to check in with franchisees and store leaders through panels and conference calls with a diverse group of employees.

“We’re trying to do a pulse check because these are immensely difficult times,” Fripp said. “We’re asking, ‘What problems are they running into? What challenges with racial issues, and how can we help you deal with those things?’ We want them to feel valued and important.”