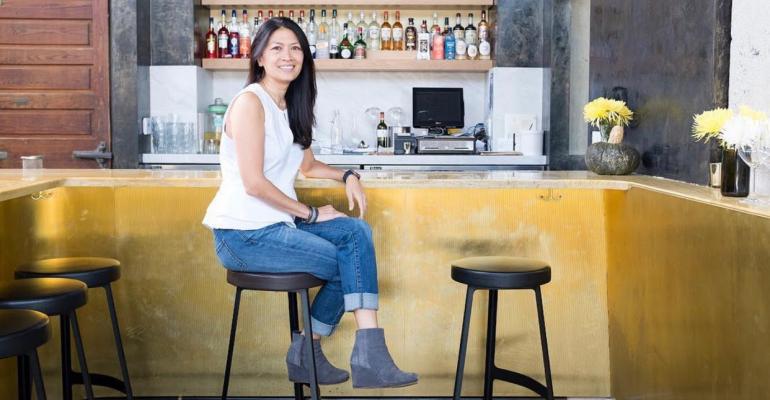 Dina Samson, owner of Rossoblu and Superfine pizza in Los Angeles spoke about applying for the RRF grant as a small business owner and woman of color

Dina Samson is the owner and operator of fine-dining Italian restaurant Rossoblu and pizza window, Superfine pizza, in Los Angeles, along with her husband, Steve. Both concepts are part of San Julian Hospitality Group. Additionally, she is a cofounder of industry advocacy organizations, the Independent Hospitality Coalition (which focuses on helping restaurants in the Los Angeles area during the pandemic) and RE:Her (which uplifts female restaurant owners).

Can you tell me about your experience during the pandemic?

I actually counted how many times we pivoted during the pandemic and I counted that we pivoted 13 times [over the past year]. Those pivots ranged anywhere from doing charitable work — we actually started a 501c3 to do that, to offering groceries and takeout meals. We've laid our team off and rehired them three times. So, it's been a definite year of just changes and modifications. It’s also been interesting to see the difference between a sit-down restaurant’s experience vs. a takeout restaurant [like Superfine pizza].

[…] We formed the Independent Hospitality Coalition during the pandemic to advocate for restaurant owners during this time, and to have a voice with legislators […] Who would have known a year ago that the Restaurant Revitalization Fund would have even been an option for us, but we just kept fighting for it.

Related: Answering questions about the American Rescue Plan and the Restaurant Revitalization Fund

Did you receive PPP loans?

For our sit-down restaurant, we got both PPPs and for Superfine pizza we got the first round but not the second. Our sales were down but they weren't down by 25% which was the breaking eligibility point. […] I know so many restaurants that did whatever they could to bring in sales but they did it at a loss to keep their teams in place or they were doing charitable work to help the community. That’s exactly what we did: we took in revenue at a loss to help the community.

Our sales were down 20% not 25%, but our profitability was much lower because of the charitable work we did. We’re fine – both of our restaurants survived — but so many restaurants in the community had the same thing happen to them.

How did you prepare to apply for the Restaurant Revitalization Fund?

We [the Independent Hospitality Coalition] coordinated with the Independent Restaurant Coalition to do these webinars or town halls with the SBA to prepare business owners and answer their questions. The first town hall we did, about 200 members showed up and the second one, about 300 members did.  […] so when I applied, I followed all the rules which was to basically demonstrate your sales and ownership and banking information. Honestly, it was fairly easy. I was shocked at how well it was run. […] My team from Re:Her and I were all applying at the same time and within about two hours, we were all done.

How would you compare it to your experience with applying for PPP?

It’s like night and day. I think they had a process that was more organized. This was easier than both the first and second-round PPP. […] They had trial and error before they actually opened it up to us. […] so that helped, I’m sure, with some of the volume. And then the portal was open during the weekend at certain times and if you caught it, you could actually get in early. One of the women on my board got in 20 minutes before it opened Monday.

What are your thoughts on the priority window for women and people of color?

Are you confident you’ll get funding?

No one knows for sure, but with this application you can track your progress. Yesterday I was checking mine and saw it moved fairly quickly, from application to completion to IRS verification to being under review.

What would be the first thing you would do with the funding?

First, I would like to pay my landlord. They haven't charged us any rent while we were closed, or when we were at little to no revenue. Then I’d pay my vendors who I haven't paid yet […] I think this time, this money is not only is helping restaurants, It’s going to help the landlord who hasn’t gotten rent payments and the suppliers who are waiting to get paid back. So this restaurant act is not necessarily about restaurants: it’s really about everyone's support.