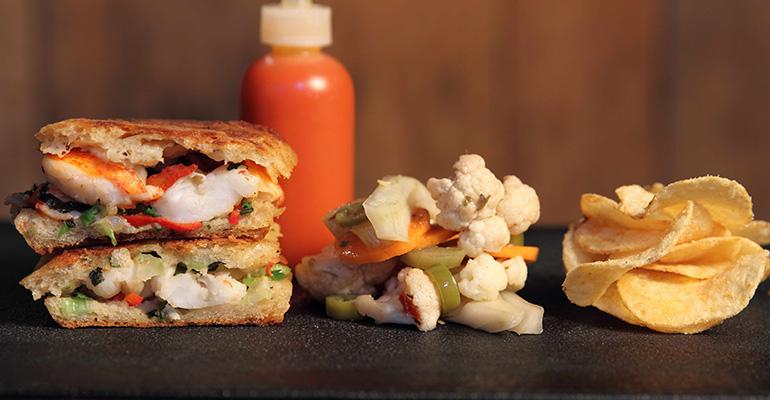 Marc Forgione might be best-known for his Michelin-starred Restaurant Marc Forgione, as well as his successful turns on the Food Network’s The Next Iron Chef and Iron Chef America, but the chef-restaurateur (a 2008 Restaurant Hospitality Rising Star) is turning his attention to a different arena: fast casual.

â€‹Forgione is following in the footsteps of many other big-name chefs who have tested the casual waters. They include Rick Bayless, Richard Blais, Bobby Flay, Jose Andres and others. Last month in St. Louis, James Beard winner Gerard Craft opened a Chipotle-style Italian concept, Porano Pasta.

“I came to work one Monday over the summer and got a call from [the developer of] Pennsy asking if I wanted to do something there, but there were restrictions, like I couldn’t have a hood and I couldn’t do meat,” recounts Forgione, as Pat LaFreida was already onboard with a meatball and filet mignon sandwiches concept.

It was while Forgione was kicking around ideas for a concept at Pennsy that lobster purveyor Homarus called and pitched an idea for a lobster sandwich. That conversation inspired the Lobster Press concept. “The whole thing was chance or fate, whatever you want to call it,” recalls Forgione.

Whatever the reason, Forgione, busy expanding his full-service restaurant portfolio with a third location of his steakhouse American Cut, says he was excited to be in the kitchen and experimenting with sandwiches. The hot lobster panini plays off the popular Chili Lobster dish at Restaurant Marc Forgione.

The labor-intensive process starts with live lobsters, caught on Homarus’s small boats along the coast of Northeast Maine and delivered to Lobster Press at Pennsy three times per week. The lobsters are cooked each morning, and each sandwich contains about a whole lobster—is 1 lb. of tail, knuckle and claw meat mixed with scallions, chilies, mint and celery, pressed between sliced, buttered ciabatta, and served with a side of chili lobster dipping sauce (made with lobster stock, sriracha and lime juice) that  Forgione created for the concept. A full sandwich menus for $17;  a half-press is $9. Forgione’s crew also makes lobster bisque every day, and Lobster Press menus a bisque-and-grilled-cheese combo for $13.

Lobster Press is located just a few feet from The Bar at the Pennsy and Forgione and his team are contributing to a menu of bar snacks, namely, grilled cheese fingers and the whimsical Lobster-in-a-Blanket, where lobster meat is baked in puff pastry.

Forgione says more “on-the-go spots” are planned for Manhattan, although he’s not talking specifics yet. “I’d love to be able to do as many as we possibly can,” says Forgione. “It’s built for multiple venues. I’m open to any kind of location; stadiums, on a dock somewhere, anywhere I see fast food now.”

Despite his reputation for attention to detail, Forgione says he’s comfortable delegating as he adds more restaurants  to his portfolio. “It’s a testament to the people I hire,” says the son of An American Place founder Larry Forgione. “The only way to grow is to have multiple venues, and you have to trust the people you work with. I’m only as good as they are.”

Forgione likes the food hall idea and the way he and his peers are helping fast food to evolve. “I think and I hope [concepts like Lobster Press are] the future of fast food. In general, [fast food] is bad, although it’s not like I’ve never eaten a Big Mac. Bad for you, bad ingredients, not done with care or with the environment in mind,” Forgione says. “If you get chefs and restaurateurs and people who care about what they’re feeding people, that should be future of fast food.”