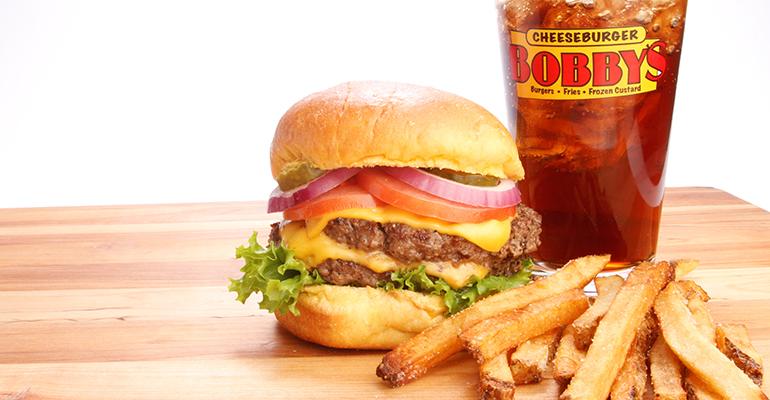 Gourmet burgers share top billing with fries and frozen custard at Cheeseburger Bobby’s, a 10-unit concept based in Atlanta. The restaurants offer a familiar build-your-own burger, fries and soda experience, but with some well-considered twists.

The emphasis is on freshness and quality ingredients. Customers have free rein at the build-your-own burger bar, with the promise of 1 million topping combinations for the quarter pounders. And because great burgers take time, the company eschews drive-through windows.

Diners can also customize their fries with a choice of 10 flavored salts, including Cajun, celery and jalapeno. And attendants walk the dining room dishing out free refills on those fries.

“We use high-quality Angus beef that we’re putting on the grill when you order,” says Bobby Stoll, co-president and founder of the chain. “Everything is fresh. We have buns delivered fresh every day. French fries are cut fresh and never frozen. We’re slicing, dicing, cutting up vegetables three times a day for the bar.”

Stoll, who launched the concept in 2007, has six restaurants are on the books for 2016, and he is eyeing 75 locations over the next five years in Atlanta and Augusta, GA; Nashville and Knoxville, TN; and Charlotte, Chapel Hill, Durham and Raleigh, NC. Stoll envisions 25 percent corporate-owned properties and the remaining franchised.

He expects growth to speed up, but maintains some caution. “We’re very selective who we sell to. Our franchisees are natural leaders with a strong work ethic while also being community-oriented. Our franchisees are currently multi-unit and looking to add an additional concept and expand their portfolio.”

A new interior concept is being rolled out by the end of 2016. “It’s done in natural earth tones to help emphasize food freshness,” he says. Other new décor features include large, trapezoid community tables and prominent photos of juicy burgers on a fiery grill along the walls by the booths and large images of freshly cut vegetables by the burger bar.

Stoll launched his foodservice career manning the grill at a Wendy’s when he was 15.  “I took my paychecks and invested them in company stock so I could buy my first restaurant,” he recalls. It was the late 1980s.

His early ventures were turnarounds.  “I bought failing restaurants, turned them around and resold them,” he says. Eventually he bought into the Stevi B’s Pizza brand. He sold those in 2006 when he reached 35 stores.