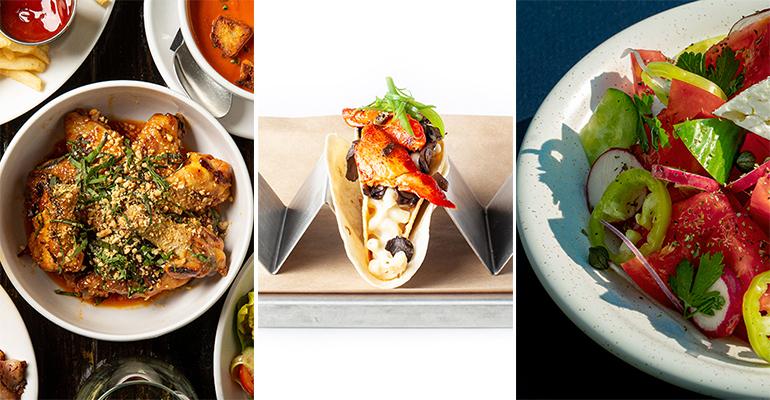 With restaurants closing in sickening, sobering record numbers, the motivations that’s keeping hopeful restaurateurs pushing forward are the silver linings and the bright spots, the lights at the end of the tunnel.

Upscale casual is a category to watch — possibly one of those flashes of light in the dark — in part because of its versatility and sense of individualism. New concepts in the segment are showing their ability to read the room, aka their customers, and they are creating a sense community and inclusivity — which is a very good thing.

For Chicago chef Doug Psaltis, who left Lettuce Entertain You Enterprises in 2019, the current era has been a time of returning to humbler roots while celebrating fruitful partnerships: with his wife, acclaimed pastry chef Hsing Chen and Ryan and Anna O’Donnell of Ballyhoo Hospitality. The team this month is opening a new Greek upscale casual restaurant in Chicago’s Logan Square neighborhood.

Psaltis is casting his memory back to the Greek diner in Queens, N.Y., the Olympia Diner. From there, he ended up working with chefs like Alain Ducasse, Dan Barber, David Bouley, Thomas Keller and more. Now, after three decades of his career in fine dining, Psaltis is taking it back to Queens and the diner with Andros Taverna, an upscale casual restaurant with love for the community as the guiding force.

Related: Restaurant industry predictions: What 2021 will bring in terms of food, drinks, fine-dining and more in the wake of COVID

Yavonne Sarber, founder of Agave & Rye, an upscale casual chain with a few locations throughout Kentucky and Southern Ohio and plans of branching out into Alabama and/or Tennessee this year. Sarber acknowledges not every restaurateur — not even close — has seen the success that the funky taco and booze chain has seen. She says her team’s community-driven approach is one deciding factor.

“Our focus has always been to go to places we feel we can make a difference,” Sarber said. That, along with endless planning, fine tuning and listening to the market relentlessly, has allowed the brand to expand. “And a huge thing is obviously just pivoting,” she adds. “I see a lot of restaurants refusing to do that. What got you here won’t get you there.”

From a societal standpoint, some upscale restaurants are planting their flag for inclusivity, like Marvin’s Food & Fuel in Chicago, which opened during the Black Lives Matter protests and is now offering upscale TV dinners to go and semi-permanent heated outdoor pergolas for safer dining.

Meanwhile in Southern California, Oste is open for takeout and delivery and bringing back dinners that pre-date TV by a few millennia with a taste of ancient Roman pizza in Los Angeles. The pizza is pinsa (Roman style) by Allesandro Iacobelli and wine by celebrated sommelier Tiffany Bulow, most recently of the Los Angeles concept Otium.

Read on for more details on Agave and Rye, Andros Taverna, Marvin’s Food & Fuel and Oste, along with a few more examples of upscale casual restaurants ready to take on the world.