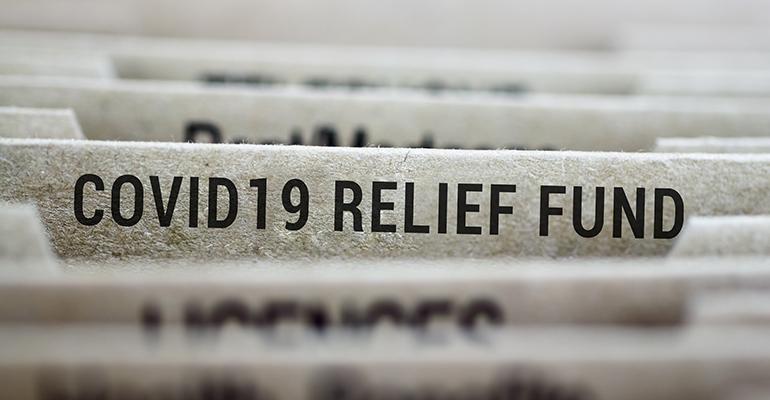 oonal / iStock / Getty Images Plus
With the most recent COVID stimulus bill being significantly less than the restaurant industry lobbied for, it begs the question — where can restaurant workers turn for relief?
Operations

With unemployment rising in the industry, here are restaurant worker relief programs giving funds to help during the winter

While some programs have stopped taking applicants since their March launches, many more have been created to help the hardest-hit industry

With the most recent COVID stimulus bill being significantly less than the restaurant industry lobbied for, it begs the question — where can restaurant workers turn for relief?

Additional unemployment funds, set to expire at the end of 2020, were temporarily extended as part of the stimulus package that passed Dec. 21, but as an additional $300 a week for recipients rather than the $600 originally signed into law in March.

Restaurant workers still need the aid. The unemployment numbers from December show that hospitality lost 498,000 jobs that month — the most of any industry by far. Since February, employment in the hospitality industry is down 23.2%, or 3.9 million jobs, according to the U.S. Bureau of Labor Statistics Jan. 8 address.

The hospitality industry began organizing in March when dining rooms closed and it became the hardest hit industry.

The National Restaurant Association Educational Foundation with the help of Guy Fieri created a fund to help restaurant workers that raised over $21.5 million, but it ran out of money this summer.

Restaurants and restaurant workers are still hoping for an industry bailout in the form of the RESTAURANTS Act.

Many relief funds began when the coronavirus pandemic started and began to slow down or stop when restaurants reopened over the summer, establishing a bit of normalcy.

But cities like Loss Angeles and New York remained shut down or with low capacity limits and continued to suffer. The industry saw 110,000 restaurants close, or 17% of the entire industry, from March to November of 2020, according to the National Restaurant Association.

The industry and its power players haven’t forgotten about workers on the whole.

David Chang won $1 million on ‘Who Wants to be a Millionaire’ in November and donated the entirety of the prize money to Southern Smoke, a relief fund.

“Since the government won’t help out restaurant workers...we have to do what we can to help out,” Chang said on Twitter in response to his win and the press around it.

Since the government won’t help out restaurant workers...we have to do what we can to help out

When COVID-19 devasted the industry in March, the organization used its “Emergency Relief Fund,” created in 2017 to give grants to out-of-work restaurant workers who needed financial support. According to the company, “examples of need include medical bills, a car accident, weather catastrophes, family support assistance, and mental health needs.”

To date, the organization’s relief fund — which Chang was specifically playing for — has distributed $4,120,955 to 2,080 people nationwide.

In August, the organization started the Chicago Restaurant Workers Relief Fund to benefit restaurant industry workers in Cook County, Illinois with a $4 million goal that would be raised to $6 million if the initial goal was met.

To date, that fund has only received 1,028 applicants and a recent Eater report claims that $3.6 million of the $4 million in funding remains unclaimed.

The qualifications are similar to almost every other grant: show proof of prior employment in the industry with a minimum of 30 hours a week and you get cash-in-hand — but only $35,000 has been claimed in five months.

Many other funds have hit or exceeded their goals and have had to close applications due to the overwhelming demand, and other organizations have had to start second or third relief funds (like Southern Smoke’s unclaimed Chicago fund).

Restaurant Opportunities Center United created a national relief fund for restaurant workers, raising over $1 million since March. The Pandemic Relief Fund has helped over 5,000 workers to date. The organization is still accepting applications.

Chef Andrew Gruel, owner of Slapfish, created a GoFundMe to benefit out-of-work restaurant workers — that includes workers outside of the Slapfish restaurants. To date, that fund has raised over $237,000 and applicants need only fill out the form on the GoFundMe page to receive funds. Applicants must show proof their hours were dramatically cut or that they are unemployed.

The fund was inspired after Gruel created his own registered 501c3, The 601 Project, and in turn received thousands of e-mails from out-of-work restaurant employees who were suffering. He decided he needed to help them on a larger scale.

The LEE Initiative, a non-profit created by Chef Edward Lee to address issues in the restaurant industry and which created grants at the beginning of the pandemic, launched The Restaurant Workers Relief Program in March to feed out-of-work restaurant employees. That program has served over 1 million meals so far, according to the group, and is still serving.

The LEE Initiative also launched the Restaurant Reboot Relief Program to help fix the supply chain, committing to invest $1 million into sustainable farms that would then give their product to restaurants to help them reopen. In December, the non-profit created the Touring Professionals Relief Kitchens to feed touring professionals in major cities.

The National Restaurant Association announced that 10,000 restaurants closed from September to December and that was before the true chill of winter set in and indoor dining remained closed in many states as COVID surged. In response to the devastation the winter is sure to bring to the industry, technology platform Toast launched a winter relief fund worth $35 million.

There are, however, many more organizations at the state and local levels. The ones listed below are still distributing funds both nationally and locally to workers.

The Restaurant Workers Relief Program was started by Chef Edward Lee to provide food, funds and supplies to out-of-work restaurant workers across the country in collaboration with Alon Shayla, Maker’s Mark and more. This program is operating in cities across the country, including McAtee Community Kitchen in Louisville, Ky., and is open seven days a week. Pickup times are listed for each individual state here.

The JSPS Family Meal initiative is the newest fund from the LEE Initiative and provides free meals to families with children enrolled in Jefferson County Public Schools.

The non-profit, which advocates against sub-minimum wage for restaurant workers, started the OFW Emergency Fund, which will provide immediate cash assistance to restaurant employees, delivery drivers and others who are tipped in the industry.

As of January, the fund has raised over $1.2 million and the fund is still distributing money to workers.

The ROC Disaster Relief Fund has a goal of raising $500,000 to help both documented and undocumented restaurant workers during the crisis.

The campaign raised over $1 million so far and helped 5,000 workers. They are still accepting donations and applicants.

Another Round, Another Rally

The group is distributing $500 grants to those who have lost their jobs or hours due to the pandemic and they are currently accepting donations to their fund.

Phone interviews for grant applicants are temporarily shut down due to demand but are expected to reopen soon.

This virtual “tip jar” allows people to give tips of $1, $2 or $5 to their favorite bartenders across the country through a list on the company website.

CORE: Children of Restaurant Employees fund helps food and beverage employees with children who have been diagnosed with COVID-19 or have had a family member diagnosed.

The Restaurant Workers COVID19 Crisis Relief Fund is distributing money to organizations helping those on the ground, providing zero-interest loans to businesses and providing funds for individual workers facing economic hardships because of the crisis.

Behind You Emergency Fund

Tennessee Action for Hospitality’s A Fund for Us

*Temporarily closed but a new round of funding will be available soon and applicants can pre-apply.

*A second fund to help those impacted by the Dec. 25 bombing in Nashville has also been created.

*This link has been updated. The original GoFundMe hit its goal and another page had to be started.