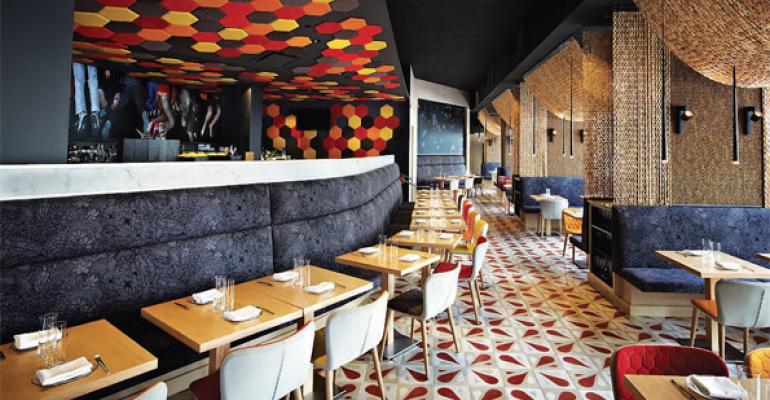 Time for a design refresh? Minor makeovers can do wonders for your image, efficiency and bottom line. &bull; See more Operations articles

Storefront Company, a farm-to-table spot that debuted two years ago in Chicago’s Wicker Park neighborhood, decided to capitalize on the popularity of its chef’s table by rolling out the experience to an entire kitchen counter. Down went one wall of the kitchen, and in its place is a chic white bar that begins next to the pastry kitchen and wraps around the perimeter of the main kitchen, abutting the pasta station and cocktail prep area.

The counter now gives 15 guests an up-close-and-personal look at what goes on in the kitchen. The exclusive seating area even has its own menu, a three- or six-course chef’s tasting and a three-course selection of cheeses or sweets that rotate weekly. Chef-partner Bryan Moscatello and his staff feel free to dole out spontaneous tastes of what’s cooking, and the menu, because of its scale, gives the kitchen more freedom to get creative with the more esoteric offal products from Storefront Company’s in-house butchery program. Counter customers also serve as guinea pigs for new creations.

Probably the biggest impact, though, is the amped-up cool factor. The 15 folks lucky enough to nab one of the seats earn bragging rights for sharing this intimate, exclusive experience.

Not every restaurant owner is gung-ho on tearing down walls, and some owners don’t stop there. Whether it’s minor cosmetic tweaks or major overhauls, clearly, there are many ways to refresh, reinvent and reinvigorate a restaurant.

Tracy Borkum, whose company Urban Kitchen Group operates several concepts in the San Diego market, is a master at reinventing concepts from available materials. A few years ago she closed Laurel, a fine dining restaurant with what she described as an ultramodern, heavily designed space that was too tony for the current economic climate. She decided to rebrand it as Cucina Urbana, overhauling the space in three and a half weeks on a shoestring budget.

Her crew brought in reclaimed and vintage items, installed wood planks on the walls and softened the existing furniture with paint and more rustic fabrics. They replaced crystals on a prominent chandelier with more rustic, whimsical accents such as keys, horseshoes and other unusual items. The new space is an open, vivid, bohemian-inspired Italian kitchen. And Borkum’s instincts have paid off: Cucina Urbana has been a hit since the reopening and has inspired two spinoffs.

Borkum, who does her own design work, is now in the midst of converting another space, Kensington Grill, to a more casual seafood restaurant called Fish Public. She’s using the opportunity to incorporate some bigger changes, including a much more open kitchen, more communal dining space and a lighter color palette.

“Breaking the barrier between the front and the back of the house is very important at the moment,” Borkum says. One way Fish Public will accomplish that is through an oyster bar within plain view of guests that will do double duty as a prep area.

Sometimes change revolves more around mechanics than aesthetics. The Arlington Club in New York City relocated its host stand from the door to the edge of the main dining room, which accomplished three things: It created a more distinct boundary for guests in the dining room (versus the lounge), opened the lounge space and created the illusion that the bar and entrance were separate venues.

Casa Vega, a landmark L.A. Mexican restaurant, got some advice from Flipping Out’s Jeff Lewis when it was featured on the show a couple of years ago. He suggested moving the entrance and adding a hostess area separate from the main dining space. Casa Vega does not take reservations and waits can last up to 90 minutes, so this was a smart move.

In Denver, Luca d’Italia owners Frank and Jacqueline Bonanno were looking for ways to bring the outdoors into the white tablecloth spot during warmer months, but they faced a challenge with the building.

“When Luca d’Italia opened, the feel was very industrial: metal chairs, gray carpet, orange paint,” Jacqueline says. “Over the years, we added wood floors, warmed up the chair choice and built out a foyer.” Still, Denverites live on restaurant patios in the summer, but the only way to create a patio—by installing garage doors where windows face the street—would have nudged the design back toward the industrial. The solution was to run the tracks up the side of the exterior. “Essentially, we’ve created giant windows that just lift up—a patio without a patio,” Bonanno says. “Because the doors are a vibrant green, they refreshed the look of the exterior of the building as well.”

Bonanno says she’s happy with the outcome. “It’s not a complete renovation, but one more step in the evolution of a really lovely little restaurant.”

In highly competitive markets like Chicago, staying on top demands constant reinvention. Graham Elliot marked its fifth anniversary this year with an overhaul that started in 2012. “We decided to take the restaurant in a more serious direction, elevating the guests’ overall experience,” says chef/restaurateur Graham Elliot. “We reduced the number of tables and chairs, capped our reservations at 90, eliminated the lounge, went to a tasting-menu-only format and closed two days a week to ensure consistency.” The restaurant also placed small terrariums at each table because, Elliot says, “we felt the room needed some warmth and a touch of nature to come inside.”

Lockwood, a restaurant at the Palmer House Hilton in Chicago, recently underwent a transformation to create a more contemporary, open look that still fits in with the hotel’s historic design. White leather chairs were swapped out for brown fabric, the lighting was updated, the wine room was carpeted to create a VIP mood and several larger high-top tables in the lounge area were replaced with a larger number of smaller, shorter versions. When the original tables were installed, about six years ago, “high tops were very popular. But it’s challenging to eat a meal at them,” says Deanne Kelly, the hotel’s director of food and beverage. Removing them, and reconfiguring some furniture in the lobby, has resulted in “a lot more activity in this area,” Kelly says.

Even though its design—sepia photos and old cameras—evokes another time, Chicago hot spot, Sepia, made a number of tweaks recently designed to help it retain the Michelin star it’s held for several years. The biggest changes involved soft goods and acoustical tiles designed to create a comfortable and elegant ambiance.

Sometimes small tweaks don’t go far enough. José Andrés’s original Jaleo tapas bar location in Washington, DC, which recently celebrated 20 years, unveiled a redesign last year that made a definite statement. Working with designer Juli Capella, Andrés wanted to create the story of his Spanish home and childhood. “When we opened in 1993, the space told the story of the Spain of yesterday, but I wanted people to know the Spain of today, full of modern art, ideas, culture and architecture.” Andrés says.

When Kimpton Hotels & Restaurant Group took over the Donovan House Hotel in Washington, DC, the rooftop lounge was an underachieving space, says Daniel Bortnick, area director of operations for the company. The space, now called DNV, was known for DJ parties, bottle service and rowdy crowds. Pool chairs, dim lighting and loud music were the order of the day. “We really wanted to make the space more inviting for lounging, dining and enjoying cocktails prepared by a mixologist,” Bortnick says, “and we needed the proper atmosphere.”

The revamped rooftop design incorporates comfy lounge chairs and tables, gazebos that provide intimate seating areas, better lighting and softer background music. The main bar was expanded and a satellite bar was created to help keep up with demand. The satellite bar also allows the hotel to close portions of the bar for private parties while the remainder operates normally. The overall feel is more in keeping with the hotel and Zentan, the Asian-themed restaurant downstairs.

Comme Ça, David Myers’s French brasserie in L.A., recently pulled out a raw bar and replaced it with five beer taps, a nod to the craft beer craze. Not only did installing the taps open up the space, “Now, we’re able to offer some really unique beers,” says g.m. Vista Murphy. The taps also provide a new focal point for the restaurant.

Exteriors need some TLC, too. The Original Dinerant, a Sage Restaurant Group concept in Portland, OR, recently installed attention-grabbing “skins” on its floor-to-ceiling windows. “The way your restaurant looks on the exterior has a direct effect on how people view what’s inside of it,” says Peter Karpinski, c.o.o. and founder. “For businesses it means that potential customers and clients may get the positive first impression that makes the difference between walking by and coming inside. Our exterior façade skinning with graphics and marketing information will allow us to make sure that our restaurant is putting its best foot forward.”

Three ways to change up the look

Change seating types. Create new seating zones, or rooms within rooms, by changing seating types. If you can revise a larger dining room area with all dining-height tables, consider raising select seating groups to counter-height or bar-height tables and stools. Keep in mind service patterns and guest circulation and how they can help define these new zones. (We don’t want dining table guests to feel hovered over by adjacent stools.)  Banquettes also provide the most flexible seating for owners and are popular with guests. Achieve this effect with upholstered benches combined with two-top tables, floating within the room or placed back-to-back.

Simplify. Sometimes it’s better to take things away than to add more. Focus on what guests interact with and what you want them to notice: the food and the service. Begin at eye level by setting the stage for the food, creating a neutral backdrop for its display. Observe what is visible to each seated guest, and then consider how you can alleviate visual clutter. Consider a new table or table finish, and minimize tabletop accessories.

Address your first impression. Sometimes owners don’t consider the guests’ experience as they walk across a parking lot, hand over keys to the valet or get dropped off by a taxi. Do the exterior of your restaurant and your front door communicate your brand concept? Are there elements of your design you wish were more or less visible? Do you provide a sense of the energy or formality of the interior? At your front door, can the host access and manage guests’ expectations before their dining experience even begins?