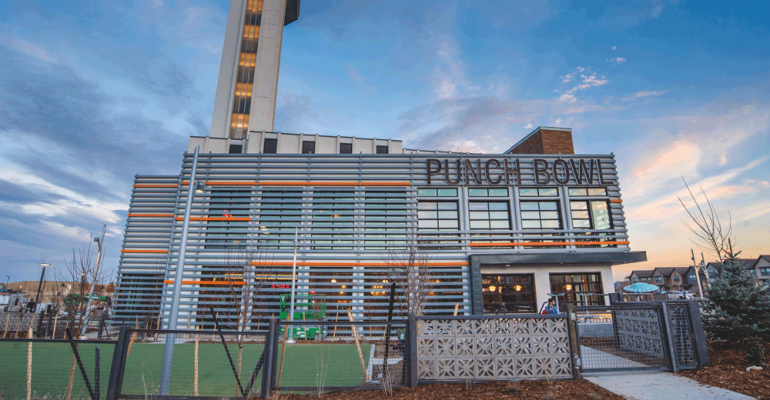 The Denver-based company opened the 32,000-square-foot project Nov. 18 in the control tower, which had been closed and unused since 1995 when the new Denver International Airport opened outside the city.

“It has been an incredible effort, and more importantly an honor, to preserve the former control tower,” said Robert Thompson, founder and CEO of Punch Bowl Social, in a statement.

A spokesperson said that from original drawings, it appears the air traffic control tower buildings was originally opened in 1962.

“We are intentional about seeking locations that have historic roots but need a new purpose,” Thompson said. “We’ve done it at our original location on Broadway in Denver and have projects in San Diego and Brooklyn that will also adapt historic properties for reuse as Punch Bowl Socials.”

The control tower building had been vacant for more than 20 years as the surrounding airport land was developed as a neighborhood for mixed retail and residential use.

The company said the interior design taps into a “golden age of flight” aesthetic. It has a capacity for 900 people, with seating for 330 inside and 320 outdoors.

Greenwich, Conn.-based private-equity firm L Catterton in June made a “significant investment” in Punch Bowl Social, which gave the brand funding for growth.