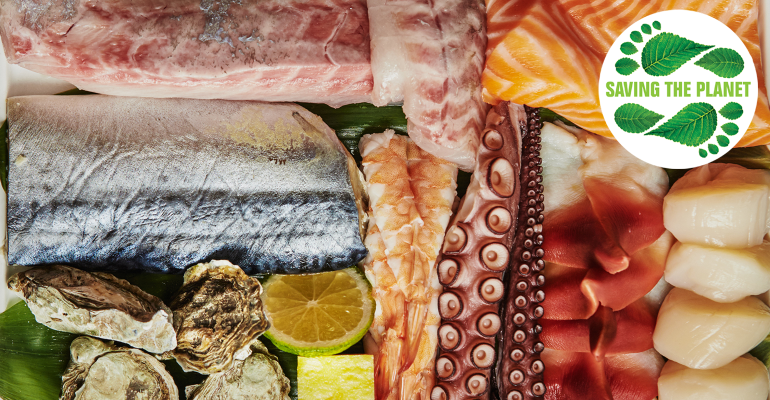 Modeling the way to a lower carbon footprint

Kristofor Lofgren hopes to show the restaurant industry how to have a gentler impact on the planet.

Lofgren is founder and CEO of Sustainable Restaurant Group, based in Portland, Ore., parent company to five Bamboo Sushi restaurants and two QuickFish Poke Bar locations, both in Portland and Denver. The group plans to open 10 more restaurants in the next two years in new markets, and has a significant private-equity investment in the works.

With that growth, Lofgren hopes to spread the message that even a sushi restaurant that pulls fish from waters around the globe can operate in a way that eases its carbon footprint. The Sustainable Restaurant Group brings in as much product as possible from U.S. waters and as much of that as it can by ship.

Related: Restaurateur promotes plants to save the planet

“We want to be the largest sustainable restaurant company in the world,” Lofgren said. “We want to show other restaurant operators it can be done.”

Founded in 2008, Bamboo was the first restaurant to be certified by the Marine Stewardship Council, which verifies sustainability practices.

The restaurants follow recommendations by the Monterey Bay Aquarium’s Seafood Watch program in selecting seafood for the menu. Lofgren (left) said the group looks for seafood that has been “super frozen,” which works well for any animal with high fat content, from scallops to mackerel. That way, seafood can be transported by boat, which has a lower carbon footprint, rather than air.

The process also reduces waste, he said, estimating that under traditional models up to 30 percent of seafood product is wasted because of improper refrigeration and transportation or illegal permitting.

For product that must be air freighted, the group finds direct routes. For instance, purchasing big-eye tuna directly from a source in Hawaii that takes one flight has a lower carbon footprint than buying yellowtail from Asia that would take six flights.

As much product as possible comes from U.S. waters, despite the fact that most seafood fished domestically ends up being exported, he said.

In fact, Lofgren analyzes the group’s carbon footprint down to the individual menu item.

On the company website, visitors can read about the troll-caught albacore that comes from certified-sustainable fisheries off the Oregon coast and is blast-frozen at sea, as well as the amount of carbon produced to get it to the plate, and how that compares with industry averages. Bamboo Sushi was the first restaurant to be certified by the Marine Stewardship Council.

Calculated into that analysis are the group’s attempts to offset emissions by donating to the Seagrass Grow project that restores seagrass meadows, which in turn support marine life. For every $1 invested, the group offsets an estimated 0.1 tons of carbon by planting 5.76 square meters of seagrass.

Lofgren’s efforts have caught the attention of investors. The group has signed a term sheet with Valor Equity Partners, a private-equity firm that has also invested in innovative companies like Tesla, Space X and Solar City. The firm’s restaurant portfolio includes the tech-focused Eatsa concept, as well as the large franchise operator Sizzling Platter and the virtual office lunchroom service Fooda.

Terms were not disclosed, but Lofgren said he will remain the majority shareholder once the deal is completed.

In the same way consumers have driven the shift toward more transparency of ingredients on restaurant menus, Lofgren said operators need to push suppliers for better sustainability practices.

“So many restaurant operators just feel so overwhelmed that they don’t pay attention to where things come from,” he said. “But if they can just spend some time asking distributors, and that prompts a response that trickles up the chain.”

“Look up the supply chain and ask your U.S. Foods or your Sysco rep, ‘Where does this come from?’ They’ll probably say they have no idea, but wonder why are you asking. And they’ll figure it out and go tell their boss,” Lofgren said.

“Restaurants have such an important role to play in mitigating climate change,” he added. “We should be the ones spearheading this.”