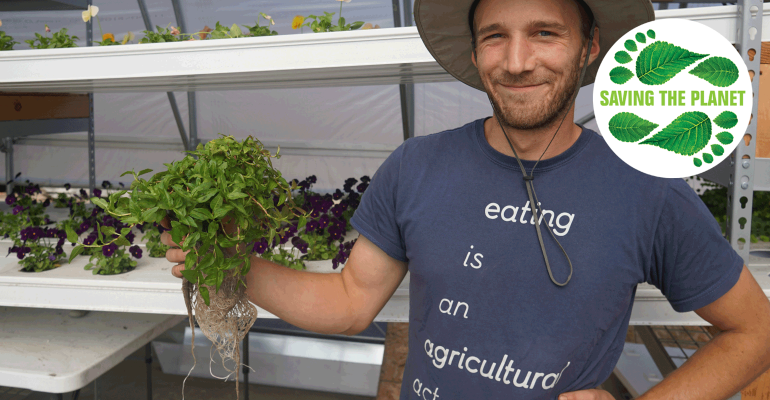 San Francisco restaurant is a steward of the soil

For The Perennial, a restaurant in San Francisco, food is seen as a tool in the fight against climate change. But it’s not so much the food itself as the way food is produced.

The restaurant, co-founded by chef Anthony Myint and Karen Leibowitz, has a strong commitment to food production that is environmentally responsible. The Perennial uses a “closed loop” system of aquaponics, for example, to convert food waste to fish food, which in turn produces fertilizer for the restaurant’s farm to grow produce used on the menu.

Related: Stepping lightly: How restaurants can reduce their carbon footprint

The restaurant also supports farmers and ranchers with healthy soil practices, and uses ingredients like the wheat Kernza, a perennial grain that regenerates soil.

For Nathan Kaufman, director of living systems for The Perennial, a key mission is promoting agricultural practices that protect the health of soil, which itself can be factor in reducing carbon in the atmosphere that contributes to global warming. The dining room of The Perennial

Kaufman is also executive director of the nonprofit Perennial Farming Initiative, or PFI, which is dedicated to combating climate change from a culinary perspective.

The restaurant’s system of aquaponics and use of soil-free greenhouse growing, for example, is designed to take pressure off the soil for high-turnover vegetables, but also to reduce the restaurant’s food waste.

In San Francisco — the first U.S. city to mandate that food waste be composted — The Perennial sends post-consumer waste to its green bins for recycling. But the restaurant also makes use of pre-consumer scraps that come from the kitchen.

Vegetable waste is fed to red wiggler worms, which Kaufman described as “your basic composting worm.” The resulting worm castings are used to enrich soil on the restaurant’s farm.

Other types of kitchen scraps, like meat and fat trimmings, citrus and moldy bread, go to a facility in nearby West Oakland to feed black soldier flies, “the sort of fly you’d see on roadkill,” Kaufman said.

The flies produce larvae, which the restaurant dehydrates and turns into fish food for sturgeon and catfish at its aquaponic facility. The resulting effluent, or fish poop, is then used as a fertilizer to nourish fruits and vegetables grown on the farm, and as a growing medium for the aquaponic greenhouse. Ingredients like guava, fresh curry leaves, edible flowers and ice lettuce — the latter a succulent vegetable — are grown for use in the restaurant. “We try to focus on stuff that you can’t find at the farmer’s market,” he said.

PFI also is a proponent of “carbon farming.”

One project is developing a Healthy Soil Guide of farms that use sustainable practices so other restaurant operators can know which to buy from to support those with a lower carbon footprint.

“It’s giving restaurants data they can use, rather than having to gather information on their own,” Kaufman said.

The Perennial uses Stemple Creek Ranch in Marin County, which produces grass-fed beef and lamb. The ranch is participating in a study of carbon farming techniques, which are designed to capture carbon in the soil and increase productivity. Coastal toast with persimmon and squash

The techniques include things like using organic compost to keep carbon in the soil, retain moisture and foster the growth of natural forage, as well as grazing strategies that allow grass to recover and mimic what animals would do in the wild, Kaufman said.

Promoting the use of Kernza, a type of deep-rooted wheatgrass, is also a way to support soil health, he said. As a perennial, Kernza doesn’t have to be reseeded and replanted every year, and it doesn’t require tilling fields, keeping carbon stored in the ground and out of the atmosphere.

These are ways restaurant operators can better integrate the consumption of food with production, Kaufman said. In a perfect world, the composting of food waste would be mandated nationally, he said. Decaying food in landfills sends methane gasses into the atmosphere and is one of the worst contributors to climate change, he said.

But these cutting-edge strategies are catching on.

“If we can make more counties look like San Francisco and Alameda, and then more states look like California, we can really make a difference,” he said.