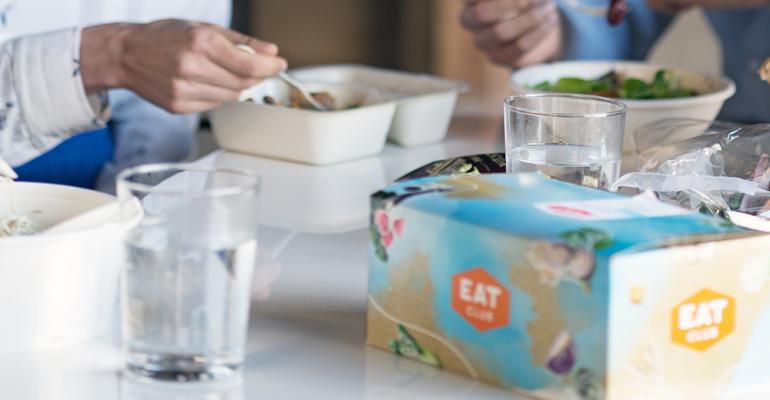 Eat Club
Eat Club is one of a growing crop of services that partner with restaurants to bundle orders from office buildings.
Operations

Office workers may be too busy to go out for lunch, but a growing niche within the delivery segment is boosting off-premise restaurant sales through partnerships that consolidate orders from office buildings.

These web- and app-based services — which include companies such as Peach, Eat Club, Forkable, Plum Relish and others — disseminate to office workers curated lunch menus from restaurants throughout the markets in which they operate.

Some handle the delivery of the orders themselves, others simply forward the orders to the restaurants or contract with local delivery companies to pick up and deliver the meals in bundles.

For the offices, the services function like a surrogate cafeteria. 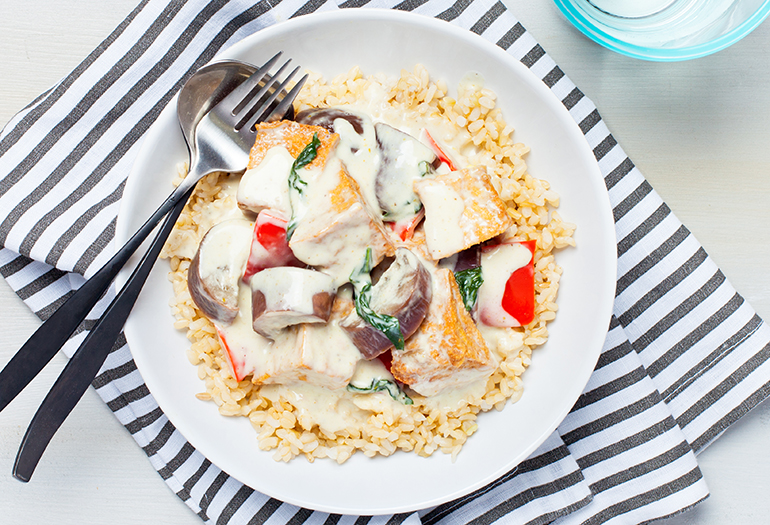 Companies that contract with these services — often in the tech industry, where company-supplied lunches are a common perk — generally have the option of paying for the meals themselves, offering a limited lunch budget to their workers, or having the workers pay for their own lunches.

For the restaurants, the services become almost like a turnkey catering program that can add hundreds or even thousands of dollars per week in incremental revenues.

“I think the main advantage for me is that I get the volume of the orders, and I can showcase my brand to more customers,” said Leni Kumalasari, co-owner of Simpang Asia, an Indonesia café in Los Angeles that has partnered with Eat Club since shortly after that service expanded to the market in 2014.

Eat Club, which is based in Redwood City, Calif., delivers Simpang Asia’s dishes to offices in South Bay and downtown Los Angeles, for example — areas that would otherwise be out of range for the West Los Angeles eatery.

The services such as Eat Club generally use algorithms to help predict orders based on past sales history, and then provide restaurants with projected volumes, usually a few days to a week ahead of time.

Kumalasari said Eat Club sends her a schedule a week in advance that lets her know when and where her menu will be offered.

She receives an update with an estimated number of orders two days before delivery, and finally the actual order comes in the morning of delivery. The only adjustment she has made to her operations has been to schedule an extra worker to come in earlier to help prepare the additional meals.

“It can be a little bit challenging, because of the timing,” said Kumalasari. “But so far, I am happy to receive the orders from them.”

As with many of the office lunch services, Eat Club rotates the menus each day among different offices. 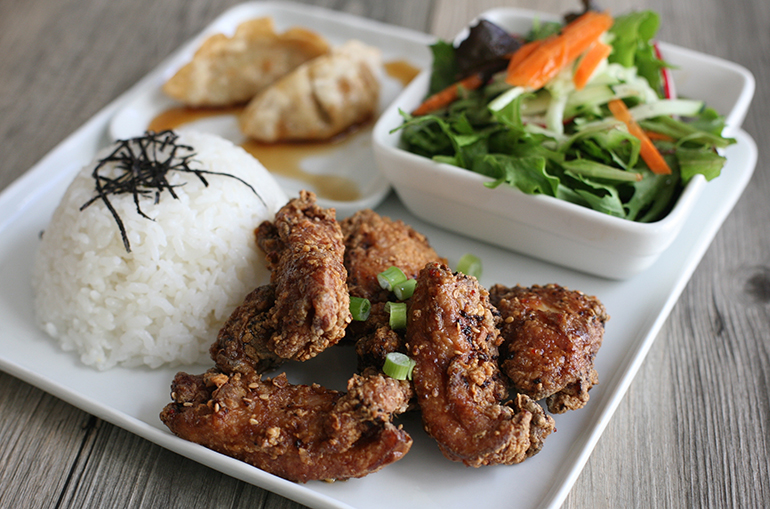 Young Lee, owner of Commissary Korean Kitchen in Seattle, has been partnering with office-lunch delivery service Peach, also based in Seattle, for about two years. He said the extra volume — which can range from 20 or 25 up to a maximum of 120 orders per day — helps optimize his revenue potential.

“For us, it’s basically like having two lunch hours,” he said.

Peach charges its restaurant partners a percentage of sales, a fee Lee described as similar to those charged by other delivery services that specialize in individual orders.

“Every catering or pick-up business takes a cut, but with Peach, the volume is so good that it kind of makes up for it,” he said.

Lee said Commissary Korean Kitchen, which offers Korean food served bento-box style, makes about four items from its menu available each day, and has worked with Peach to change up the menu every few months.

Peach sends the restaurant a schedule of planned deliveries and estimated orders a week ahead of time, which allows Lee and his staff to ensure that they have enough ingredients and the appropriate level  of staffing. The day before the delivery, the restaurant can view the number of pre-orders that have come in already. Some office workers order a day or more ahead.

By 10:30 a.m. on the morning of delivery, the orders have been finalized, and the drivers begin showing up between 11 a.m. and 11:30 a.m. to take the lunches on their routes.

Peach handles all of the interaction with the customers, including customer complaints, and relays them back to the restaurant as appropriate.

“It’s nice for us because we have just one point of contact,” said Lee.

Dan Simons, co-owner of Farmers Restaurant Group, parent of the five-unit Founding Farmers chain in the Mid-Atlantic, said he has been supplying between seven and 14 lunch orders per day through Washington, D.C.-based Plum Relish, with an average order size of $250.

Farmers began working with Plum Relish after Simon met with the founder and CEO of the delivery service, Sarah Van Dell, who impressed him with her leadership and vision.

“We get the big advantages of Plum Relish handling the marketing, the delivery logistics and the customer off-site requirements, and we can focus on what we’re great at, which is making yummy food,” said Simon.

He said Plum Relish has also solved “a lot of the typical pain points” that can be associated with catering and delivery with its focus on providing a rotating menu of high-quality lunches, served bento box-style.

Like many other of the office-delivery services, Plum Relish also supplies its own custom take-out containers. Farmers collaborates with Plum Relish to create the menu of offerings, which always includes a vegan option.

Nick Vasi, owner of Fambrini’s Café in Palo Alto, Calif., said he’s been selling about 300 to 350 meals per week through San Francisco-based Forkable, an office-lunch delivery service that seeks to distinguish itself from competitors by offering suggested lunches for individual diners based on their preferences and their ratings of past meals.

Vasi said the daily volume can vary from a couple dozen orders to around 100 or more, and sometimes he’s had to bring in extra workers to handle the orders.

Forkable can select dishes from the entire Fambrini’s Café menu to offer diners. The delivery company sends suggested items to each person in its pool of office workers, who can accept the suggested dish, modify it or select a different item altogether.

Fambrini’s receives the next day’s orders between 2:45 p.m. and 3 p.m. each day via email, then the next morning Forkable’s drivers pick up the meals to be delivered to the offices on their routes.

“We were really skeptical at the beginning, because it started with just a few orders a day,” said Vasi. “After the first couple of months, things changed completely, and now we have an amazing business relationship with those guys.”

The newest breed of office lunch delivery specialists operates somewhat like catering companies, somewhat like delivery companies, and very much like virtual corporate cafeterias. The digital services partner with offices to offer curated menus from local restaurants, then aggregate orders from the individual workers, send them to the restaurants and, in most cases, pick them up and deliver them in bulk to the offices.

Following are some examples of such services that are expanding in markets around the country.

Eat Club
Redwood City, Calif.-based Eat Club launched in 2010 as a consumer-focused company, but quickly shifted its business model to targeting corporate offices with lunch offerings from local restaurants, with a focus on global cuisines. Eat Club members have until 10 a.m. each day to order via website or mobile app, or can order up to a week in advance. The company recently received an investment from Sodexho, the global noncommercial foodservice company.

Peach
Seattle-based Peach operates in the Seattle market, the Dallas-Fort Worth area, San Diego and the Boston metro area. Unlike other office lunch delivery services that use apps or websites, Peach sends a brief menu in a text message each morning to the office workers in its database, who then respond via text with their selection. The company partners with local delivery services to pick up the orders and deliver them to the offices.

Plum Relish
Washington, D.C-based Plum Relish offers both individual lunches and catering for groups in the greater Washington area. The company launched with its own kitchen, but has since expanded to include several area restaurants, with plans to add more. Customers order two business days in advance, with a minimum of 10 orders per office. The delivery fee and all taxes are included in the price displayed on its website.