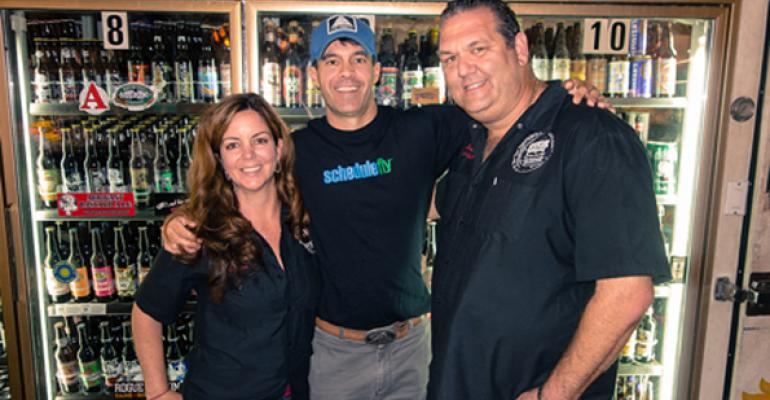 Rather than following conventional wisdom, first-time restaurant owners Julian and Lisa Siegel have trusted their instincts all along. And contrary to what any restaurant veteran or consultant might have predicted, they have turned their restaurant into a wildly successful operation.

A hard-to-find, out-of-the-way location in a tough part of town. An honor system for grabbing a cold one (or a few) from their selection of 550 bottled beers. Couches and recliners that form a lounge area smack in the middle of the restaurant and consume a large swath of the usable floor space. No marketing or advertising. Not a single TV in the place. The list of things that "shouldn't work," but do, goes on and on.

Yet Riverside Market & Café in Ft. Lauderdale, FL, has as much business as the Siegels can handle and a genuinely happy, close-knit staff. It’s a word-of-mouth phenomenon that manages to make everybody who walks in instantly feel at home, from billionaire businessmen, to tatted-out skateboarders, city council members, local life guard captains, attorneys, stay-at-home moms, even a couple of guys from North Carolina who are shooting a video series.

How do they do it? The Siegels described their approach to the business.

“Sometimes we do get into a jam and get understaffed. Everyone says, ‘Just put it on Facebook. Put a sign on the door.’"

“There's nothing worse I can imagine than walking into a restaurant with a Help Wanted sign on the door,” Julian says. “We're not a lumber yard. When people walk up to your restaurant, you want them to think that you've got everything under control, so the sign in the door doesn't work. Same with social media. I couldn't imagine putting a note on Facebook, ‘We need servers. We need help,’ because you always at least try to feel that you are secure in your business and you don't need help. Good help will come to you.”

He says some of the best employees just walked through the door. And there's always a network.

“Somebody says, ‘Hey my sister's friend's cousin is new in town and he's great.’ or ‘My best friend's son will work out. He's a dream.’ You get a lot of referrals, which is great because at least there's a level of connection.”

He is reluctant to advertise job vacancies, because they “we'll have a thousand resumes, set up a hundred interviews, ten will show up, and one is qualified. I prefer to just roll the dice and let the right person walk in the door.”

Make everyone feel at home

When the Siegels were hatching plans for Riverside Market and Café, they envisioned a midcentury theme of a general store that would be based on great food and craft beer, and kid-friendly.

At one point they converted a portion of the restaurant into a children's play area with board games, padded floor, toys and high chairs.

Lisa says the couple would rather spend time building relationships than obsessing over the numbers.

Check your stress at the door

“Julian and I try to live a stress-free life and have a stress-free environment here at Riverside,” Lisa says. “I think we emanate that energy, and people feel it. You come here to relax, enjoy yourself, meet a new friend or just be by yourself and drink a beer and go back to what may be a chaotic life.”

She says another restaurant owner come in and on his way out he said, "This is the most relaxing hour I have had in months. And now I have to go back to my crazy life at my restaurant."

“That's what we want you to experience when you come here,” Lisa says.

Wil Brawley is a partner at Schedulefly, a company that provides restaurants with web-based staff-scheduling and communication software. He is the author of Restaurant Owners Uncorked: Twenty Owners Share Their Recipes for Success.