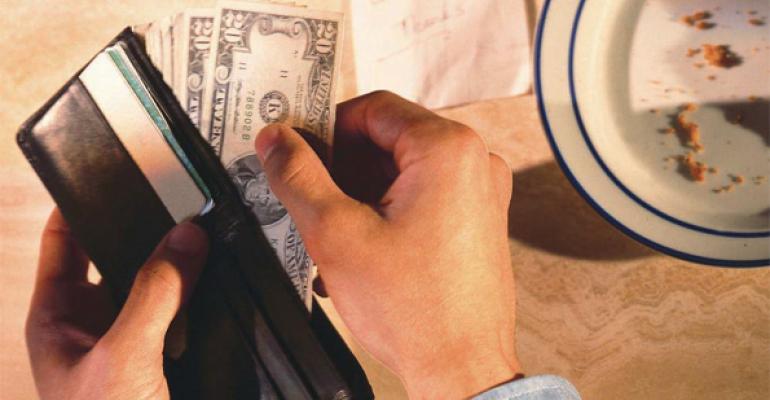 9 steps to a better bottom line

Business is picking up, but profits remain elusive. How can you turn it around? &bull; See more Finance articles

After struggling along with the limping economy for the last five years, restaurants are seeing signs of better days. According to Sageworks, a financial data and analysis firm, foodservice operators in 2010 eked out an average profit margin of 1.4 percent on sales growth of 0.9 percent. By August of this year, annual sales were up 8.7 percent, and restaurants were averaging 4.1 percent profit. Nice turnaround, sure, but clearly room for improvement remains.

The two obvious routes to more robust profits are (a) running a tighter ship and trimming expenses, or (b) driving revenues by selling more product, or at least more profitable product. We’ve pulled together ideas to help you do both.

1. Show your staff some love.

In recent months, stories about restaurants’ ill treatment of employees (low wages, no benefits, paychecks loaded onto fee-plagued debit cards, etc.) have dominated the headlines. But players like Chipotle and Starbucks seem to have no trouble attracting motivated, engaged people, largely thanks to the higher wages and better perks they dangle before recruits.

Del Frisco’s Restaurant Group, which operates three dozen restaurants across the country under three brands, has won loyal staffers by taking seemingly extraordinary care of them: medical benefits, including  full medical and dental coverage after two years for the employees and their families; a matching 401(k) after one year—and 20 hours a week is deemed full-time.

Why swim so hard against the tide? It’s bait for the right candidates. Once hired, they are groomed, steeped in the company culture and expected to help their peers excel. GMs, for example, attend quarterly meetings at the company’s Texas headquarters where they review their p&l statements before their colleagues, who offer constructive feedback.

The cost of all those employee perks adds up, but Del Frisco management considers it money well spent, because it fosters loyalty. That loyalty, in turn, allows veteran servers, managers and others to build rapport with guests. It also cuts down on training expenses and learning curves. “Turnover in our business is costly, so when you don’t have it, that’s money you’re saving,” says c.o.o. Jeff Carcara.

Aurelio’s Pizza, a 41-unit chain based in Illinois, buys a lot of cheese. Typically with such a crucial commodity, the safe thing to do is sign a contract with a guaranteed price for the year. This year, when January rolled around, the futures market seemed a little bloated, so Aurelio’s did something different: The company took a gamble and went without a contract from January to April, which allowed it to capitalize on lower spot market prices. When April rolled around, futures prices dropped and the company then locked in at the lower rates.

The gamble paid off, saving each franchise about $35,000 in cheese bills.

Loyalty programs, punchcards, Facebook fan pages, birthday clubs: Whatever you can do to encourage the public to choose your establishment more often or over the competition is going to impact the bottom line in a good way. With so many smartphone users glued to their devices much of the day, more mobile apps are providing ways to encourage loyalty as well as helping restaurant managers track and encourage purchasing behavior.

Sebastians Café, a five-location quick-service concept based in Boston, recently launched a customized version of a payment app, LevelUp, that both provides spending information to the restaurant and incentives to the user.

The app “gathers a lot of spending habit data,” says Mike Conley, director of marketing for Sebastians. “I can tell you that Joe Blow comes in on Wednesdays and spends an average of $10 at lunch.” Armed with that data, the restaurants can target promotions—single or bulk e-mails with a coupon for breakfast, for example—designed to encourage more frequent visits.

“If I can get someone to come in more often, that’s a win for me,” Conley says.

Within the first month after introducing the app, Sebastians had seen a 30-percent increase in visit frequency, a 7-percent jump in volume and 17 percent higher total revenues.

Menu engineering—explored in depth in the September 2013 issue of Restaurant Hospitality—is complex enough to merit an entire college semester. But there are a few basic rules of design that operators often overlook:

• Know what your profit is on each item. “Many independent operators don’t have a good handle on that,”  says Jonathan Marek, a senior v.p. with predictive analytics firm APT.

• In menu development, stress craveability. “You have to make food that people want to come back for,” Marek says.

Periodically you need to step back and take a good look at your clientele to see how it’s evolving—and whether you are keeping up with their preferences, says Dallas-based consultant Brad Belletto, c.e.o. of Vision 360. “The neighborhood sometimes changes, and some restaurant operators are trying to shove their grandmother’s recipes down the throats of their customers, who are no longer interested in eating that way,” Belletto says.

And even if your menu is up-to-date, reflecting the trends toward local, sustainable, organic and more health-oriented fare, do the surroundings reflect that? If not, that’s a disconnect you need to correct. “We are seeing an increasing use of fresher color palettes and other changes designed to create more of an ambiance of freshness and local flavor,” Marek says.

6. Train your servers to be sellers, too.

Servers need to be more than order takers. Karen Malody, whose firm Culinary Options advises restaurant owners on concept development and menu strategy, says training servers to be attentive, willing to upsell and able to get people excited about ordering items is key. Too often, she observes, servers are very passive about encouraging guests to think big.

“Without an opportunistic, excited front-of-house staff, you’re never going to promote more sales,” she says. “Just adding one more item per table can make a big impact on profit.”

Jason Chadwick, a consultant and partner with Restaurant Rehab, agrees that focused training is essential for effective servers. “A lot of owners throw them to the wolves,” he says. They should be trained in selling techniques, not just the contents of the menu. “People look at a menu for 90 seconds, so you need to make sure signature and profitable items are in the most prominent places, and make sure the servers are pointing them out.”

7. Cut down on waste and losses.

Analysts estimate that up to 1 percent of restaurant revenue is lost to employee theft. Doesn’t seem like a lot, except when you consider it represents a quarter of that 4.1-percent average profit for a restaurant. For years that loss has been an accepted cost of doing business, but technology may be changing attitudes.

A study published in August 2013 found that installing theft alert software changed behavior so much that revenues per restaurant increased about 7 percent a week. Servers, aware their transactions were being monitored, not only curtailed suspect practices (e.g., freebies), but also encouraged efforts to suggest items like second drinks or a dessert. The key, the researchers found, was surveillance. Not surprisingly, employees who know they are being monitored behave a little better.

Losses can happen in other, small ways that add up as well. Take plating. Many restaurants haven’t established plating standards, says Malody, and that’s a recipe for waste. “Portion control can be a huge drain on profit,” she says, “If you’ve costed something out at 3-4 ounces and every time someone plates it they cheat by 2 ounces, that cuts into profits.”

Malody says she is shocked at how many restaurants haven’t set up a rigid equipment maintenance schedule, especially since preventive maintenance can prolong the life of a costly item—and keep the kitchen running smoothly. And Belletto wonders why so many restaurants have avoided new technologies, such as induction cooking and LED lighting, that have clear financial benefits and offer quick returns on investment.

Another issue with facilities: How are your bathrooms? Numerous studies have shown that guests’ regard for a restaurant suffers when they encounter a dirty bathroom. And don’t stop there.

“You just can’t pay enough attention to cleanliness,” Malody says. “You need to wipe the glasses clean, polish the spots from the silver, clean the floors and seats. All these subtle indicators that a guest can see and touch influence their decision whether to come back.”

Desserts serve many purposes: pushing up check averages in a profitable category, providing a way to mark a special occasion and, if spectacular enough, leaving guests with a “wow” moment to remember. But many restaurants may underestimate the power of a lengthy dessert menu. According to Technomic, more consumers are treating themselves to dessert-like items all day and to cap meals. Two-fifths of consumers say they are eating desserts after a meal at least twice a week. But wait, there’s more.

“Consumers aren’t holding off on dessert until after dinner; instead, they’re reaching for easily accessible, handheld and portable treats at just about any time of day,” says Darren Tristano, executive v.p. at Technomic. “Desserts are also functioning as snacks and even meal replacements. Operators will need to look at flavors, portion sizes and evolving needs to satisfy a broad range of consumers’ dessert expectations and preferences.”

We may want our cake, but not too much of it: Consumers responding to Technomic’s survey say they would like low-cal and sugar-free options, and smaller portions would be a welcome option.

As for that portable angle? Think cookies, bars, cupcakes, ice cream and gelato cones, donuts—anything that can be carried while walking, scarfed down in the car or washed down with a midmorning or afternoon espresso.