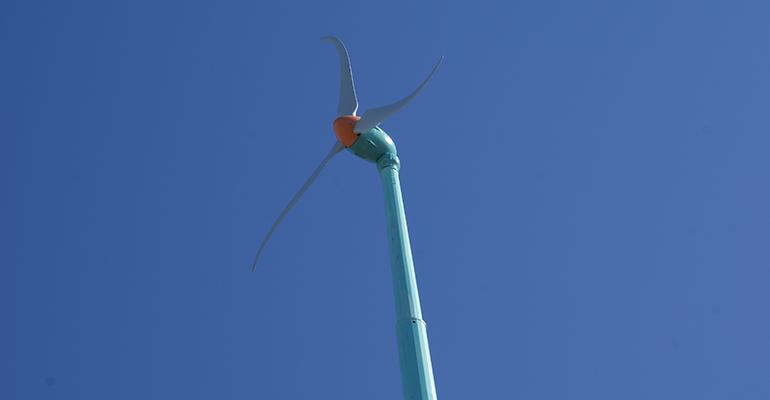 Some restaurants have invested in wind turbines to offset energy costs.
Operations

Wind and solar power may be more attainable than operators realize: Here’s how 3 independent restaurants are investing in renewable energy

When you think of restaurants investing in sustainable practices, checking off green-friendly boxes like compostable packaging and energy-efficient equipment, or even zero-waste promises might come to mind. But one of the more challenging, less headline-grabbing sustainable practices is investing in alternative energy resources like solar and wind power. The upfront cost of alternative energy can be significant for operators, and, as the Green Restaurant Association’s CEO Michael Oshman said, “if you are in a city, it’s not like you can stick a wind turbine on the roof or put solar panels on a building you’re renting from.”

Oshman said that he recommends restaurants try solar energy first because it won’t take too long to see the benefits on your electric bill from installing solar panels. All sustainable energies are competing with each other (and with “dirty” energy sources), and so far, solar is winning out over hydropower and wind power.

But for the Original Oyster House in Mobile, Ala., being located in a rural community allowed them to invest in a 55-foot-tall wind turbine at the edge of their property. The giant structure runs 24 hours a day (when the wind reaches at least eight miles per hour) and helps to offset energy costs and light up the restaurant’s outdoor seating area and playground for children. 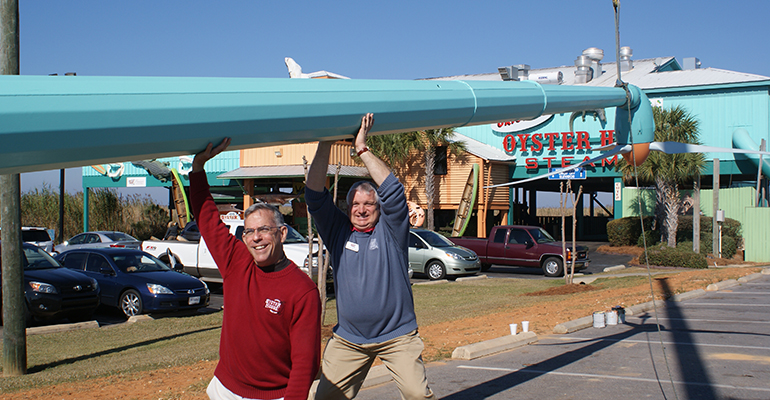 Original Oyster House in Mobile, Ala., being located in a rural community allowed them to invest in a 55-foot-tall wind turbine at the edge of their property.

Though the restaurant has been open since 1983, cofounders David Dekle and Joe Roszkowski — who sold the restaurant in 2015 to Ark Restaurants in New York — installed the wind turbine in 2012. Before that, Dekle said they were already bitten by the “green bug” and had been converting their cooking oil into biodiesel fuel for their delivery trucks. When they decided to install the wind turbine nearly a decade ago, they were able to easily do so because the land is a flat delta system. But the turbine itself cost a whopping $40,000, and Dekle said he will likely be “long gone” before the investment pays off. For them, it was about the investment they were able to make in clean energy for the future.

“The amount of energy that went back into our grid from one small turbine is not substantial, but it does help,” Dekle said. “It takes some carbon emissions out of the atmosphere. Everyone should be onboard with a smaller carbon footprint. We even went the hard route of the biodiesel and the turbine, and we’re still trying.”

Dekle and Roszkowski also placed hot water solar panels on the roof in 2010 for about $3,000 — a much more affordable option for many operators.

“These are unbelievably efficient,” Dekle said. “You could recoup your investment in about three years. Using electricity to heat water is the most inefficient use of power […] but solar hot water heaters heat the water, and you have a tank on the roof and it drops down into the tanks. It heats up pretty fast.”

Despite their efforts over the years, Dekle estimates that only about 5% of their energy usage is renewable.

“The wind turbine is not that efficient unless you have fields of them chugging away,” he said. “But we do it because we feel it might spark interest in other people.”

Other restaurants have indeed become interested in alternative energy sources, but without ownership of a roof, access to flat delta planes or the significant funds to invest in a wind turbine, the next-best option is indirect investment.

Root Down — a Denver restaurant that is part of the Edible Beats restaurant group — takes pride in their sustainable investments. The restaurant is made from and uses 75% upcycled, recycled or repurposed materials and products. But chef and owner Justin Cucci wanted to do more than just build his restaurant and serve his food with sustainability in mind.

“Restaurants are giant energy consumers, and I was struggling with that,” Cucci said. “I decided that I wanted to do something to push the limits on sustainability. I wanted to make up for my sins of the past 20 years [in the restaurant business] and do it at a higher level.”

When Cucci opened Root Down in 2008, it was too expensive to invest in solar energy, so they decided to buy wind power credits from Xcel, a power company in Colorado. Although they are not connected to a wind turbine, Root Down can instead invest in the Xcel power grid’s wind power. Instead of, for example, paying $1 per kilowatt for electric energy, they pay $1.90 toward clean sustainable energy wind power.

Cucci said that when they first invested in wind power, it was about 80-90% more expensive than the alternative, and now it’s only about 30% more expensive. He estimates that over the next five years it will become more economically feasible (and may even save more money) to invest in wind energy instead of the traditional electrical power grid. Given the substaintial cost, he understands why sustainable energy is not as popular as other green-friendly practices:

“When you’re a restaurant operator counting pennies every day, paying more for something as invisible as power is not as sexy as saying, ‘we’re buying this organic meat from this ranch or farm,’” Cucci said.

He’s not the only one investing in wind energy credits. Shouk — a street food-inspired fast-casual restaurant in Washington, D.C. that opened in 2016 — is 100% wind-powered despite being located in a major city. Additionally, they have invested in biodegradable packaging, and started a campaign to invite customers to plant trees. Since 2016, they have been working with the city to match their electricity usage to wind power credits.

“We’re essentially investing in alternative energy sources,” Shouk co-owner Ran Nussbacher said. “The people who live near those wind plants are benefitting from the wind power, but we’re helping those projects exist.”