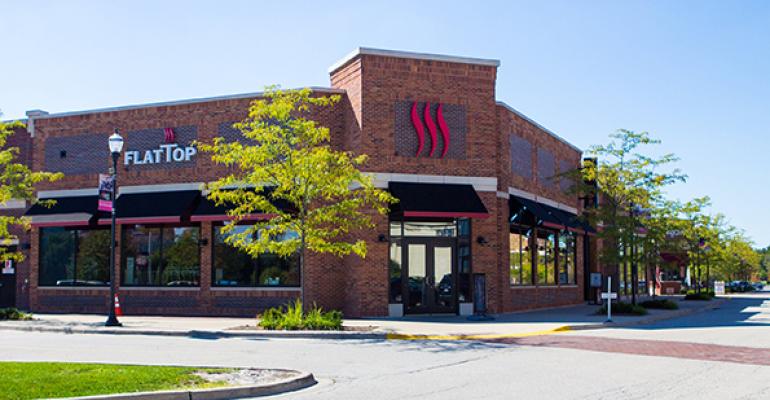 Flat Top Grill and Stir Crazy Fresh Asian Grill are two brands that have never lived up to their initial promise. Both launched in 1995, the create-your-own meal concepts merged into one company, Flat Out Crazy, in 2009, and at their peak they had 37 locations open. Steady losses forced the merged company into bankruptcy in early 2013. An investor group that includes Doug Pak, c.e.o. of Frandeli Group (a restaurant management and administration company) along with Hillstreet Capital IV bought the business at a bankruptcy auction in April, 2013. At that time, the portfolio had dwindled to 22 units.

Pak has said the goal is to push “steady, slow growth over the next five years,” with a focus on Chicago.

Earlier this year, the company named Michael Wozniak president and c.e.o. Wozniak has spent 27 years with T.G.I. Fridays, Romano’s Macaroni Grill, Texas Roadhouse and other hospitality brands. He is focusing his efforts on reviving Flat Top Grill, which he considers “a 19-year-old startup.” We asked about his plans for this teenager.

RH: Flat Top Grill seemed to hit a lot of the right notes: fast, fresh, customized meals with an Asian twist. Yet it has been stalled. How will you jump-start it?

Wozniak: We are going to create a new segment: not fast casual, not casual dining, but a spot in between. It’s a highly customizable chain.

Originally the menu was mainly Asian-themed noodles or rice bowl stir-fries. We’re expanding it. Our tagline is “They grow it, you choose it, we cook it.” We are working closely with local vendors to make sure we are getting the freshest ingredients. If you are a vegan, a paleo, gluten-free, allergic to nuts, you can eat with us. We provide calorie counts and sodium counts, and we were doing kale before kale was cool.

If you like fast-casual, you can treat us as fast-casual: Get in line, get your food, sit down and enjoy it. If you want to relax, you can order drinks, appetizers and desserts and hang out. We want to give you more choices.

RH: How have you tuned up the menu?

Wozniak: The choices have been expanded, so now we include quinoa and seasonal items, anywhere from 20 to 26 vegetable choices, 8 meat proteins, some nonmeat vegan items and seafood.

We are rolling out the Mighty Burrito—if you make it the way we suggest, it’s 1.5 pounds. We have also introduced a signature roti bread that guests can use to build their own tacos or burritos, and we are working on stuffed sandwiches with gluten-free bread. If you have an allergy or eating preference, if you put a stick in it we will cook it separately so it doesn’t touch anything else.

We are moving toward having a book of Flat Top favorites, so if want a noodle bowl, we’ll have recipes that are tried and true—you still go through the line and decide how much rice and noodles you want.

We are also creating new desserts and appetizers.

RH: Any changes in the look of the brand?

Wozniak: We are making it easier to use. The cues are really around fresh street food, so the design is somewhat modern, and each location is slightly different. We tried to make them as community- friendly as possible. We have chalkboards with pictures from the community and photos from the local area. The grill will be the center of attention, with the food cooked in front of the guests. We’re not trying to hide anything from people.

Up until now the décor has been dark. We want to cater to all people with lighter hues, sharper images, updating the décor to make it more tech-savvy, adding wi-fi and more televisions.

Since we’ve rolled out burritos, we are redesigning the fresh food line to create space for people to make their own pitas and burritos. We’re looking at the first remodeled location to open in the first quarter of 2015.

RH: Who is your core customer now?

Wozniak: It has been Millennials. Our demographics really trend with the Chipotle and Whole Foods folks: a younger clientele that is food-centric and people who are concerned about truth in food.

RH: What kind of expansion do you foresee for Flat Top Grill, and how can you change the course?

Wozniak: We have 13 units now. Most of our growth will be corporate owned. We expect to open two units a year over the next five years. We already have people looking for us to expand outside U.S.; we’re not saying we won’t do franchise. Right now we are in a transition period.