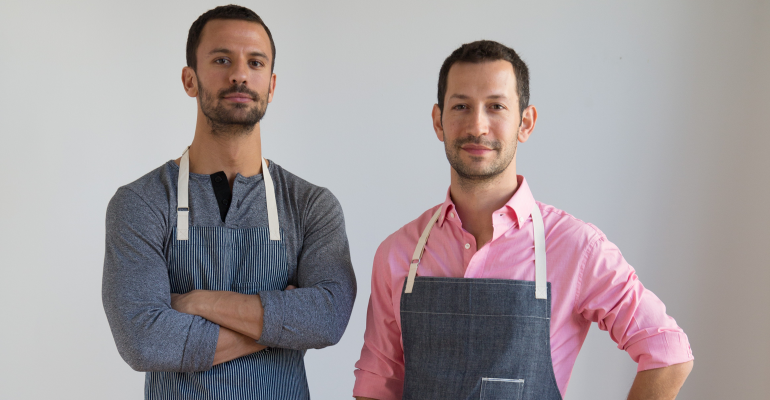 Brothers Leo and Oliver Kremer founded the fast-casual chain Dos Toros in 2009 to bring the Mission-style burritos they ate growing up in Berkeley, Calif., to New York City.

Dos Toros now has 13 units, all company-owned, and plans to enter its second market of Chicago later this year.

The Kremers discussed their philosophy, management approach and the importance of a burrito’s shape with Nation’s Restaurant News.

There are a lot of burrito chains. What makes Dos Toros different?

Leo Kremer: We sauté the grains and then steam it [with onions, garlic and tomato] in an actual pot, the old-fashioned way, versus a rice cooker. At most burrito places, the rice is probably their easiest recipe. For us, I would say it’s our hardest recipe. It’s just hard to get that sauté and fluffiness.

Oliver: Also, just the shape of the burrito. [Dos Toros’ burritos are tightly packed cylinders.] This is a fully integrated flavor profile. Where at other places you get these cubic burritos, where you get one bite of this, one bite of that, these burritos are much more integrated. The whole point of a burrito is to taste multiple flavors at the same time.

Leo: We have learned that we are not super Instagram-able, but the upside is that wonderfully integrated flavor and great eating experience.

Oliver: The photogenic burrito is elusive.

Leo: It’s true. You see these milkshakes with M&M’s and Reese’s Pieces flying out the top. Leo: We could do unicorn nachos, with red chips, blue chips…

Oliver: Oh wow, definitely. But we keep it simple. We’re about using really high-quality ingredients. We’re about putting love and care into the recipes as we make them and into the food as it’s being assembled on the service line. That’s kind of our thing.

Leo: And the scratch cooking is a big deal. Even the hot sauces: Every single location is making its own hot sauce from scratch — charring jalapeños, boiling tomatillos and blending them with this huge immersion blender.

How do you maintain consistency?

Leo: That’s a good follow-up question. It’s all about the team and the training.

Oliver: The secret ingredient is our team, because the menu doesn’t change that much, but it comes down to executing day in, day out, and that’s about having great people and training them and empowering them to deliver on our brand promise.

How do you keep good employees in the current labor environment?

Leo: First, you try to hire people that have positive energy, a warm disposition and enthusiasm, and then hopefully you really create a system where they feel supported and see opportunities for growth. That’s huge: Knowing you can grow if you commit yourself. And I think once you get that ball rolling it becomes infectious, and people want to be a part of that. And they tell their friends, and their friends want to come onboard. Our turnover is about half the industry average as a result. And that helps with our complex recipes and cooking from scratch.

Oliver: And we make silly music videos. All of our performers and a lot of those involved are Toros [employees].

What about pay and benefits?

Leo: [Employees] get best-in-class compensation and benefits. I can’t get specific about it, but we feel like we’re at the very top end of that. So it all comes together. You have systems that are empowering and fun, and you’re kind of busy and winning and giving a good experience, and you just show respect to everyone. Just being nice to everybody goes a heck of a long way.

Oliver: It’s amazing how many establishments I’ll visit, and you can tell sometimes who the owner is, and they’re just not being warm and friendly. When we go into our restaurants, we make eye contact and say hello to everyone working there.

Leo: That goes with our sales strategy, too. If the food tastes great and we’re serving it in a thoughtful way, with hospitality and speed, then the numbers will be good. We try to drive it with product and hospitality, and then everything works out.

How did you get into the burrito business?

Leo: We ate burritos every day.

Oliver: We grew up eating Mission-style burritos, and this is our homage to the places we grew up eating. We’re basically recreating that cuisine using amazing ingredients [from humanely raised animals fed vegetarian diets and not treated with antibiotics or hormones].

A lot of people eat burritos. What prompted you to move to New York and sell them?

Leo: We ate more burritos than most people. I’d say we’re expert burrito consumers. And so we had a lot of strong feelings about how a burrito should look and feel and taste and be served. And it kind of dawned on us that it wasn’t being done like it’s done in the Bay Area in other parts of the country — specifically New York, but lots of places. It was such an obvious opportunity.

Leo: We thought about doing Providence, [R.I.,] first because it was an approachable urban environment and more like Berkeley, where we grew up — more college town. But we had more connections [in New York].

Oliver: And there was more opportunity. The fast-casual world is about serving a lot of people, and in New York we had the opportunity to serve a lot more people. How did you get funding for the first restaurant?

Leo: The first location was [from] a small group of family and friends in California who believed in us. They probably shouldn’t have, and yet it worked. So we opened the first one on a shoestring budget — bought used equipment and didn’t put enough air conditioning in.

Oliver: We’ve since replaced all that stuff.

Leo: We had to replace basically every single part of that taqueria, but it got us open, and then we were able, through the grace of good press and good word of mouth, to increase sales quickly. We had a [New York] Times review that came out about three months after we opened and doubled our business, and we never looked back. We had enough cash flow to fund a second [location,] and then we were able to raise some debt through an SBA [Small Business Administration] loan and fund a few more after that, and then we did a small equity kind of deal to keep things moving.

So you have some partners now.

What are your expansion plans for new markets?

Leo: We’re going to Chicago later this year. We’re super excited. It’s an amazing city and a great second market for us.

Leo: Our first five years, we opened one [restaurant] a year. We’re not one of these super go-go kind of growth companies.

Oliver: That never really works. I think they say the sweet spot, if you’re really an emerging concept, is between 25 percent and 40 percent [growth] a year. Once you get above that…