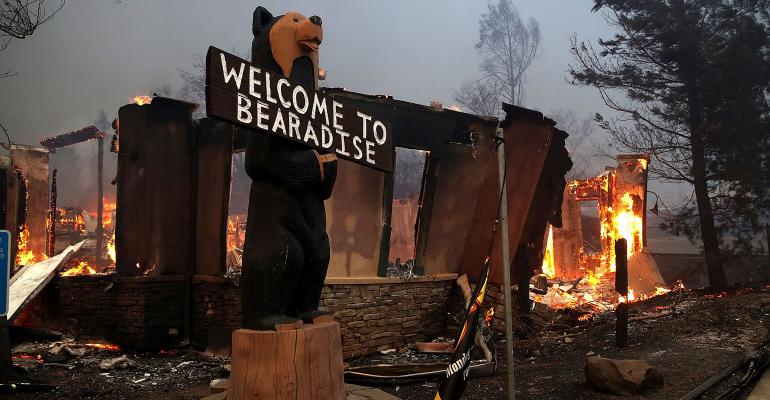 Fires in California raged on Monday leaving devastated communities in their path, as they destroyed hundreds of homes and businesses including locations of several quick-service chains in Northern California.

As of Monday, the Woolsey fire near the posh community of Malibu, Calif., had scorched 91,572 acres and was only 20 percent contained, according to state authorities. Two people were killed in the blaze, officials said. The fire hasdestroyed an estimated 370 structures. An additional 57,000 structures are threatened by the fire, which started last week.

In Northern California, the Camp fire has burned 113,000 acres over four days and destroyed 6,453 homes and 260 commercial buildings, state authorities reported. Fourty-two fatalities were confirmed as of Tuesday morning. Much of the destruction has occurred in Paradise, a small community of 26,000 residents nestled in the foothills of California’s Sierra Nevada mountains. The fire, which is only 25 percent contained, barreled its way through the town incinerating hospitals, elementary schools, grocery stores and restaurants.

A KFC, a Burger King, a Jack in the Box and a McDonald's were gobbled up by flames in Paradise leaving nothing but rubble, according to details confirmed by Nation’s Restaurant News, as well information cited in various Bay Area news sites. 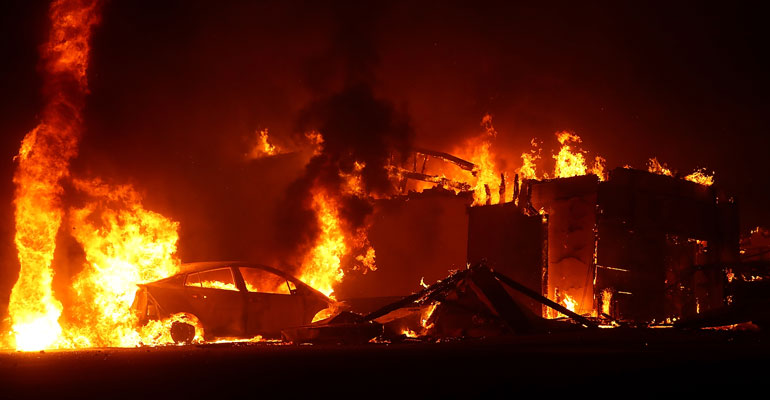 A KFC unit engulfed in flames at Paradise

It remains early to gauge the full scope of the fires’ damage, but the California Restaurant Association, said it is “ready and eager” to help impacted workers. The foundation’s Restaurants Care program provides basic living expenses to help restaurant workers who face unforeseen hardships, illnesses or natural disasters.

“If anyone wants to help, donations will go a long way as people recover and rebuild,” Alycia Harshfield, executive director for CRA foundation, said.

The foundation will work with restaurants in unaffected areas to raise funding for the program. Anyone wanting to help, or seeking help, can visit the group’s website.

Here’s a list of known restaurants damaged by the California fires, as well as restaurants and celebrities helping first responders. Information was confirmed by either NRN or obtained from various media outlets including the San Francisco Chronicle and SF Gate. 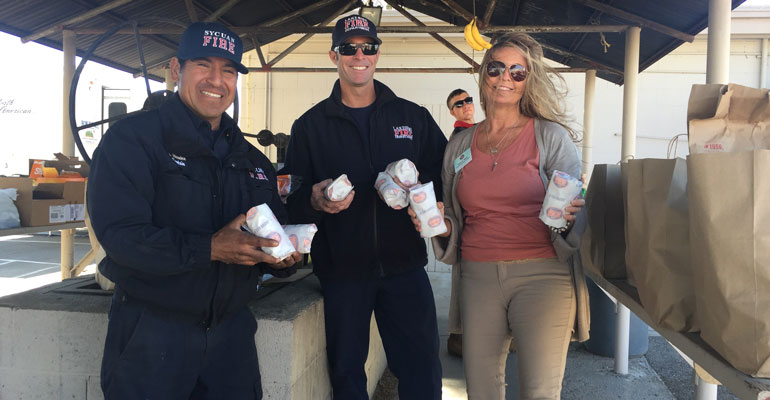 Jersey Mike’s has been feeding first responders in Southern California.

Guy Fieri made a surprise visit to serve dinner to everyone at the law enforcement staging area at Butte College. Thank you so much Guy for filling our bellies and lifting our spirits. #ButteSheriff #CampFire pic.twitter.com/ZnhNxOa81n

Update November 13, 2018: This article has been revised to include updates from new restaurant brands as well as an updated death toll for the Camp fire.

Update November 13, 2018: The bullet point on Mountain Mike's has been updated to reflect that the chain's restaurant was not destroyed, as previously thought.