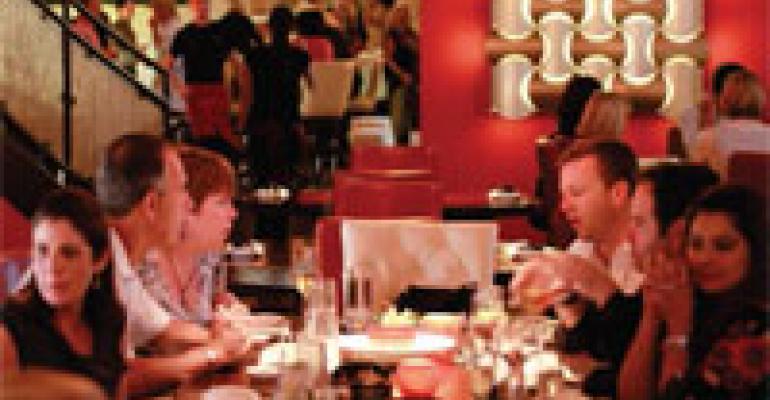 Career-switchers often find success in the restaurant industry. But few have come further, faster, than Bryan Emperor. Once a Master of the Universe on Wall Street, where he worked as a trader for Lehman Brothers, he's found his culinary groove as chef/gm at Kalu Asian Kitchen in Charlotte, NC, which opened last September.

It's been some start for Kalu. The place earned a 2010 Esquire Best New Restaurant nod, while Emperor won the Southeast region in Food & Wine's The People's Best New Chef competition this past March. That's rapid-fire success for a brand-new restaurant as big as Kalu — a 7,000 sq. ft. space that houses a 227-seat dining room plus a bar/lounge area that accommodates 100.

Even more challenging, Emperor's food requires the kind of precision that's tricky to pull off in a kitchen doing this much volume. “Unlike many Asian restaurants, the menu is not Westernized,” he says. Instead, it's authentic fare, focusing on the flavors of Japan, mostly, plus China and Korea. Emperor's job is to make it all approachable and appealing to the residents of this North Carolina city.

Furthermore, Kalu sits just steps away from Time Warner Cable Arena, home of the NBA's Charlotte Bobcats and host to many other events. This location ensures a steady flow of customers, but it's not necessarily a crowd that craves Japanese food.

Part of Emperor's mission is to make sure patrons perceive Kalu as a hip hangout, as well as a fine restaurant. For many in the U.S., Japanese food translates to “sushi” and very little else. Emperor's showing them what they've been missing.

His background makes him well-prepared for this task. Emperor headed for the Culinary Institute of America in Hyde Park, NY, after he left Wall Street at age 30. After graduation, he externed in Japan, where he had previously been an exchange student. The combination of his cooking talent and language skills helped him land jobs where he learned plenty about Japanese cooking and Korean-style yakiniku. He even scored a training gig at a high-end kaiseki restaurant in Tokyo, a rarity for a Westerner.

Returning to New York City, Emperor worked at Nobu, and then for Jean-Georges Vongerichten and Gray Kunz. He later opened the well-regarded TEN in Charlottesville, VA, where the emphasis was on modern Japanese cuisine, and then Departure in Portland, OR, where the new Asian cuisine menu recast the Japanese Izakaya experience for a Pacific Northwest clientele.

Translating all this experience into a dinner-only restaurant in the mid-South may be his biggest challenge yet. Charlotte, the second-largest banking center in the country after New York, has plenty of sophisticated, well-heeled diners. Yet even they may not have seen a menu like Kalu's before.

It's divided into nine categories.

Patrons then have the choice of two soups (Miso or Clear Soup, each $7) and a couple of dim sum items (Pork Shiu Mai, $9; Whole Shrimp Har Gow, $12). Or they might opt for something from the four-item Agemono (fried items) list. Options here include Kakiage Kaiseki (seasonal vegetables, rock shrimp, white ponzu, $15); and Tori Jo Karai (spicy wings with Korean taste, Takuan Pickle, $12).

Skewered offerings on the Kushiyaki portion of the menu range from the $6 Mikado Teriyaki (chicken, Mikado teriyaki sauce, shaved onion) on the low end to a trio of $13 Wagyu skirt steak items on the high.

The menu finishes off with a seven-item sushi section, where popular items include Unagi Sansho (baked river eel, shiso, avocado, Japanese peppercorn, $15); Kaimono Zushi (Hokkaido scallop, X.O. sauce, $18) and Maguro Honey (fresh fatty tuna, seven-spiced honey, $16). In 2008, Emperor triumphed in the North American segment of the Seven Sushi Samurai competition, later representing the U.S. at the world finals in London, where he finished third — pretty good for a guy who grew up in Brooklyn.

Beverages are a key revenue driver at Kalu, with a lengthy wine list, an impressive collection of sakes and plenty of Korean Soju spirits.

Emperor has shown other career-changers how far they can go in cooking. He's also proven that authentic Japanese fare can work in a contemporary American restaurant setting. It's no small feat.