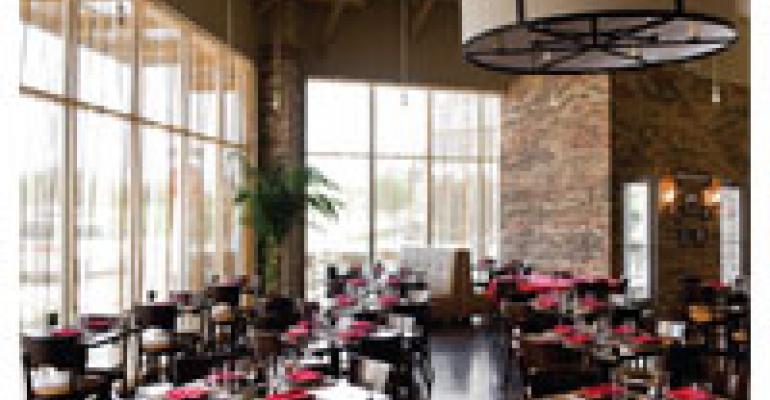 Casey Thompson: Worth The Wait

Thanks to her lengthy run on Bravo's Top Chef, Casey Thompson achieved celebrity chef status without having a restaurant of her own, having cooked in no more than a couple of kitchens. The Season Three runner-up was voted a “fan favorite,” but that was back in Oct. 2007. Since then those fans haven't had a way to actually taste her food.

Until now. Thompson has put her media-driven reputation on the line at her new signature restaurant, Brownstone, which opened in May in Fort Worth, TX. With a four-star review from the Dallas Morning News already on the books, Thompson has more than lived up to the hype.

And there was plenty of hype to live up to. The 32-year-old Thompson went from college business major (University of North Texas) to prep worker at Dean Fearing's Mansion on Turtle Creek, where she eventually became sous chef. Then when Fearing's wife Lynae partnered with Tracy Rathbun, wife of chef Kent Rathbun, to open Dallas pan-Asian spot Shinsei, Thompson moved over to head the kitchen there.

Which meant that Thompson made it onto Top Chef despite a relatively thin resume that showed no formal culinary school training and limited experience. Yet she was terrific on Top Chef, reaching the finals and earning $10,000 as “fan favorite.” After the show aired, Thompson departed Shinsei for a lengthy California sojourn where she learned a lot about wine and made her living on the “personal appearance” circuit. Her website (www.chefcaseythompson.com) sold “Casey” hats, mugs, t-shirts and the like, bringing in some revenue while she built her personal brand.

But still, no signature restaurant — until Dallas nightlife impresario Sam Samedi approached her. He wanted to put a restaurant in Fort Worth's West 7th development where people could feel comfortable. Samedi says of Brownstone, “the overall atmosphere was designed to convey the feeling of being welcomed as a guest into the home of an old friend.”

So what kind of food did Thompson — whose previous work had focused on high-falutin' Texas fare with Fearing and an all-Asian flavor palette at Shinsei — come up with for Brownstone?

She describes it as Southern-style, with plenty of respect given to fresh regional ingredients prepared with straight-ahead Texas cooking techniques. “It's the food you grew up loving,” Thompson promises her customers.

Cocktails are more adventurous. The Serrano Celery Caipirinha features hand-pressed Serrano chili, Boca Loca refined Cachaca, freshly squeezed lime and hand-extracted celery juices and Regan's No. 6 Orange Bitters. It goes for $10, as do most other handcrafted cocktails on the list. Samedi's nightclub background (he owns the ever-happening Wish in Dallas) shows itself well on Brownstone's drink list.

It's all served in a 5,000 sq. ft. space situated in Fort Worth's West 7th development corridor. The area describes itself as “a strategic blend of pedestrian-friendly urban elements at the juncture of six major streets. This burgeoning community of commercial activity satisfies a growing marketplace demand for style, taste and new experiences.”

This bit of developer-speak translates like this: There are a lot of people walking around day and night searching for cool places to spend their money. Given Brownstone's handsome look — it's comfortable, all right, although not particularly brownstone-esque by New York City or Boston standards — and on-the-money menu, it's going to get more than its fair share of this crowd.

Throw in Thompson's Top Chef fan base and this restaurant has a bright future. “Brownstone is one of the best restaurants to open in our area this year,” opines the Dallas Morning News. “Even if Thompson's reverence for produce evokes California cuisine, her cooking is emphatically Texas, executed with quiet confidence and a sense of fun.” Thompson was a fan favorite before people tasted her food. Who knows how big that fan base will be now that she has a restaurant she can call her own?