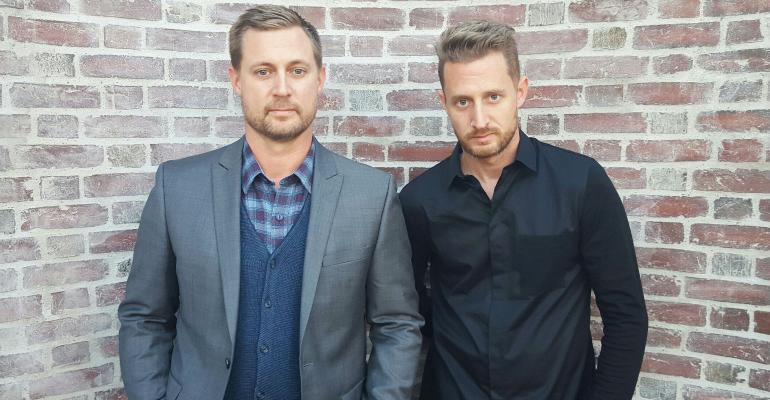 Voltaggio Brothers Steakhouse is something of a homecoming for Bryan and Michael Voltaggio. The celebrity chef brothers grew up not far from the restaurant, which opened earlier this year at the MGM National Harbor in Oxon Hill, Md.

“Michael and I envisioned this to be a place where people come together around a table to share food,” said Bryan Voltaggio, who operates five other restaurants in the area, including Volt, a fine-dining restaurant in their hometown of Frederick, Md.

This is the first time the brothers, who gained national fame by competing on Bravo TV’s “Top Chef,” have opened a restaurant together. Michael Voltaggio operates the eateries Ink and Sack Sandwiches in Los Angeles. “This is Michael and I cooking steak in our home,” Bryan said.

The new restaurant resembles a home, with multiple rooms, each with a unique, homey vibe, including a living room-like bar, a dining room and a kitchen with a giant hearth.

And, just like at home, all the food is served family style. The way to do that at Voltaggio Brothers Steakhouse is for guests to try multiple cuts of meat and a bunch of sides. However, not all of the customers have been into it, Michael said.

“That’s been the hardest part,” he said. To encourage sharing, a carving knife and fork are centerpieces at each table. “So, right away, we’re suggesting that it’s a family-style dining experience. … Some people are turned off by it, and then halfway through the experience something clicks and they’re actually sharing their food anyway.”

The restaurant serves steakhouse fare with modern elements. For instance, creamed spinach is topped with an aerated cheese sauce and fried shallots.

“Creamed spinach has always been this homogenous stew of cream and spinach together, with not a lot of texture,” Bryan said. “The way that [chef de cuisine] Cole [Dickinson] presented it is genius. It’s the best bite of creamed spinach I’ve ever had.” Dickinson was chef de cuisine at Ink until the steakhouse opened, and has been cooking with Michael for more than a decade.

“Basically, when Cole came here it was like cutting off one of my arms,” Michael said, but it’s his way of having a presence at the steakhouse while living 3,000 miles away, in Los Angeles.

Bryan, meanwhile, has added it to his regular restaurant rotation, along with his restaurants Range, Volt, Family Meal and Ageo, which has two locations. “Lots of people get creative with how to present that dish, but they forget that tomatoes are good maybe three or four months out of the year, at best,” Michael said.

The tomato is slowly roasted overnight with olive oil, espelette pepper and fennel pollen. It’s served with Italian pomodoro sauce on the bottom of the dish, and topped with croutons made of panko, cocoa powder, butter and Kalamata olives.

The steakhouse has just over 200 seats, compared with 88 seats at Ink and 74 seats at Volt. That meant the brothers had to find creative ways to scale up production for some items, like the puffed beef tendon that garnishes every steak.

At Ink, the tendons garnished a beef cheek dish and were prepared in a pressure cooker. “It comes out as this really gelatinous, kind of sticky mass,” Michael said.

The tendons are then frozen, sliced thinly on a meat slicer and dried in a dehydrator. They’re deep-fried at service and puff up like pork rinds.

At Voltaggio Brothers Steakhouse, the tendon is stewed, frozen, sliced and dehydrated in the hotel’s main kitchens.

The brothers agree that having the support of a hotel empire makes things a lot easier.

“You have endless amounts of sheet trays and oven space and people to help, and the hotel has supported us through every single vision we’ve tried to execute,” Michael said. “We’ll continue to push those things until someone says no.”