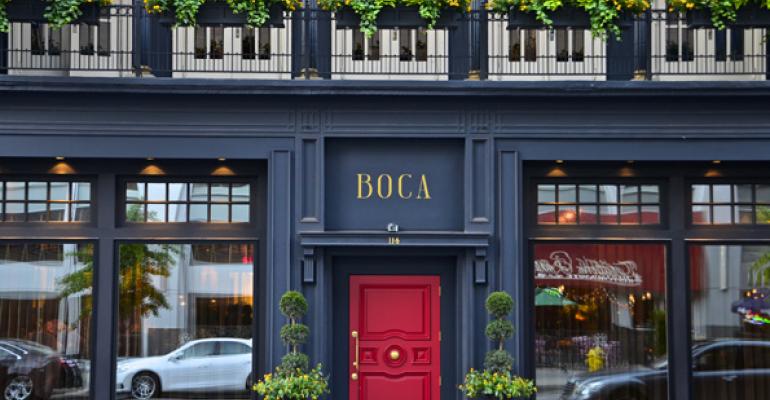 <p> The familiar Maisonette location has been revived with a new identity: Boca. Sotto is on the lower level.</p>
Trends>New Restaurant Concepts

Taking over a cherished location with a long history of excellence might seem daunting. But David Falk has boldly gone where few would dare in retrofitting the space formerly occupied by The Maisonette, the five-star Cincinnati landmark that closed in 2005. In the basement space he has installed Sotto, a rustic Italian concept. Upstairs is a new location for Boca, with a menu offering French- and Italian-inspired large and small plates and a more upscale vibe. Together, his restaurants have helped reinvigorate the once-bustling business district. His Boca Restaurant group also created Nada, a Mexican concept with expansion possibilities. We spoke with this Cincinnati native—a CIA grad and veteran of kitchens from Charlie Trotter’s and Spiaggia in Chicago to Ristorante Paris in Rome—about filling big shoes.

We spent five years on it. There aren’t too many projects I would spend half a decade on, but because it was important to the city and because of the scope of it, I poured everything into it. I love classical music, and this is as close as you get to writing a symphony. It’s like standing up in front of the entire city of Cincinnati and taking your clothes off and saying “I hope you like what you see.” Everybody had their own memory of The Maisonette. It’s like going up against your mom’s chocolate chip cookie.

RH: The Maisonette had lofty standards and a style that isn’t that approachable, especially today, for many people. Did you feel any pressure to uphold those standards?

Falk: We couldn’t dumb it down, and at the same time we wanted to honor all the things about that style of dining and make it feel like it was the 21st-century version of an iconic restaurant. So with Boca we took a large portion of the menu and offer it in tasting portions, for example. We installed a huge chandelier from 19th-century Paris, and recreated an old alcove that pays homage to The Maisonette in a funky way—you would realize it if you remembered the restaurant, but if you don’t you would just say it’s cool—and those are juxtaposed with a communal table and a big bar.

RH: How are the small plates working out?

Falk: More Americans, even Midwesterners, are getting to the point where they don’t measure value by volume. They’ll go to a restaurant and try half a glass of an amazing wine to taste it. That’s how people are eating more, so it gave us an opportunity to have smaller portions with a $14-$16 price tag.

A bigger vision for Cincinnati dining

The menu is broken down into appetizers, mains and a boutique ranch section. Instead of flying in beef, we rotate local farms or butchers. There are about 10 items, and you can get them in tasting or entrée portions.

We want to resist the temptation to create just for the sake of creating. I think there is not enough emphasis on creating a soulful experience. Sometimes I go to amazing restaurants and the plating is so abstract that I need a roadmap to eat. Our whole emphasis is moving forward by going back, taking sauces that you don’t see anymore and adding a twist.

RH: Sotto translates to “below.” How is it different from Boca?

Falk: Sotto is as much of a no-brainer of a concept as you can have, a hard-core trattoria with a very cool design. We don’t want to show off our creativity; instead, we want to highlight the greatness of Italian food. We make the pasta in-house and most of the menu is under $20. The wine list is all from Italy.

RH: This project is only one component of a plan to revitalize the center city. How has that progressed?

Falk: Downtown’s turnaround has been nothing short of amazing. The city leaders started a nonprofit to find creative people and microfinance them. All the energy is downtown. I live downtown, and all my restaurants are downtown. We’ve always had the business, just not the residential and entertainment. Once the investment started, the arts and restaurants followed, then residential. There’s been a sense of awakening here. I don’t know the exact number, but maybe 14-15 restaurants have opened in downtown Cincinnati in the last five years.

Right now Cincinnati is kind of bitch-slapping the Mark Twain quote, "When the world comes to an end, I want to be in Cincinnati because everything there happens 20 years later."

RH: Your third downtown restaurant, Nada, is a sprawling spot known for its party atmosphere. What inspired it?

Falk: I looked at the market and didn’t find any of the Mexican concepts very exciting. The city needed something energetic, sexy and fun, and no cuisine creates a sense of celebration like Mexican. Nada is a restaurant celebrating not being a Mexican restaurant. I went into it with a chef’s approach: If I were cooking for friends, what would I cook? The name stands for “nothing like it,” because you can’t point to anything that it’s like. It’s been hugely successful—easily our most successful idea—and we are looking at Detroit, Cleveland, St. Louis and Indianapolis as perfect arenas for a place like this. We plan to do 10 in the next five years.