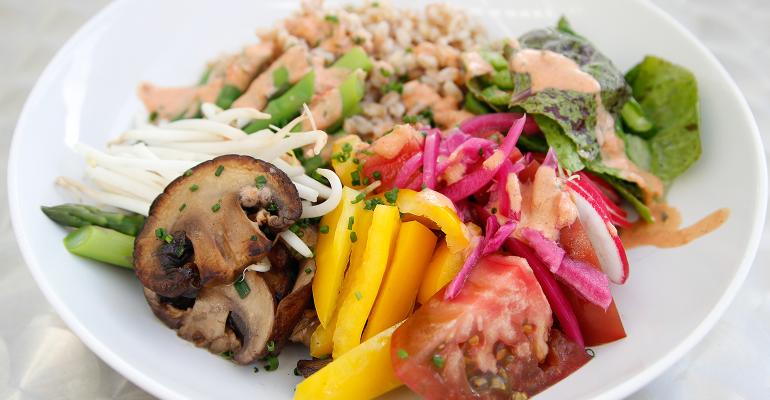 The founder of the fast-casual Slapfish chain will launch two new restaurant concepts this month, designed for growth, within the rapidly expanding world of food halls.

Andrew Gruel, who founded eight-unit Slapfish in 2011, will open Two Birds, a chicken sandwich concept, and Butterleaf, serving only plant-based offerings, on March 24, at the new Trade Food Hall in Irvine, Calif., which is developed by the Lincoln Property Co. The idea is to co-brand the two concepts, each operated out of about 400 square feet, specifically for food halls. Gruel contends food halls are opening up lower-cost-of-entry opportunities for restaurant operators across the country.

“Food halls are the new food trucks,” Gruel said. “We’re seeing food halls pop up everywhere, and they’re the new bread and butter for landlords because they can pack a lot of food retail into a small space. And they’re so much sexier than food courts, which just don’t have much play anymore.”

Restaurant operators can open a food hall concept for $25,000 to $50,000 — roughly a fifth of the cost of a brick-and-mortar, although the price depends on costs the landlord covers, he said.

Most landlords will cover a significant amount of build-out costs, for things like venting and plumbing, leaving restaurant operators more in control of design and tables, or what Gruel called “the garnishes.”

Gruel’s team has also taken an equity position in Centerhub, a bar concept going into Trade Food Hall, which will feature American cocktails made with local Southern California ingredients. The bar will make the food hall more of a night out for diners to linger and order more, as opposed to venues geared toward high-volume, eat-and-go dining, he said.

Food quality is also a draw. The menus at Two Birds and Butterleaf are simple and customizable, and feature high-quality ingredients.

Two Birds will serve Jidori chicken, a free-range brand based in Los Angeles and prized in the fine-dining world. The chicken will be fried or grilled. Guests can choose a Bird in the Hand sandwich or a Bird in the Bush salad, or a bag of chicken with two to four pieces.

Butterleaf will serve signature meat-free burgers and vegetable-only sandwiches, as well as “avocado bombs,” which are brushed with an umami glaze that includes ground shiitake mushrooms, then breaded with crushed Fritos chips before being lightly fried.

Also on the menu are freshly made umami chips, or potato chips that have been seasoned with seaweed, chiles and sesame; as well as build-your-own bowls and wraps with a revolving menu of ancient grains, various sauces and seasonal vegetables.

Beverages will include fresh juices and cold-brew coffee. The average check will be about $8. Gruel said he plans to build out the digital side of the business as Two Birds and Butterleaf grow.

Working with John Wolanin, chief creative officer and a psychologist-turned-app-developer, both Two Birds and Butterleaf will eventually offer digital ordering and payment through a proprietary app.

Gruel is also considering launching a delivery-only variation, with no storefront and a speakeasy-like feel, marketing a unique menu only for app users “in the know.”

Food would be prepared in a lower-cost commercial space. Rather than using third-party delivery players, Gruel would build his own delivery staff to control how the brand is presented.

Gruel said Two Birds and Butterleaf have the potential to reach 100 units over the next decade. There are no immediate plans to franchise, but he said he hasn’t ruled it out.

“We’re targeting every food hall, and there are so many food halls opening up — it’s crazy,” Gruel said. “Landlords have seen gold in this.”

Slapfish, which is being franchised in partnership with Fransmart, is expected to reach 15 to 17 units by the end of 2017.

The company also has deals with franchisees to grow Slapfish in the United Kingdom and South Korea, Gruel said.