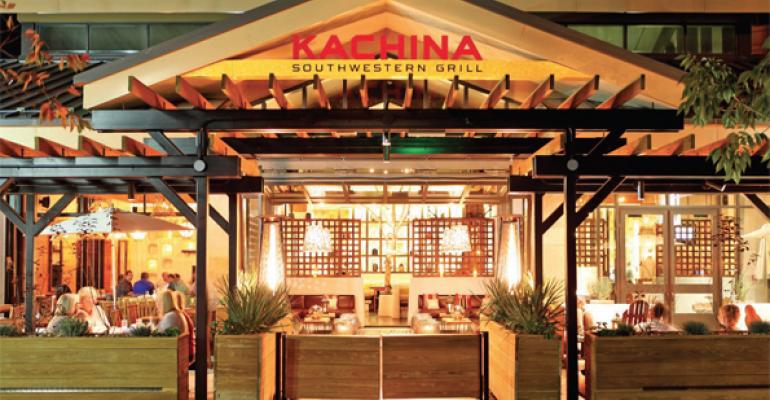 Sage Restaurant Group is a different breed of multiconcept operator. Its specialty is the creation of one-off restaurants that go into hotels operated by its parent company, Denver-based Sage Hospitality Group. You’d think SRG would play it safe and choose middle-of-the-road concepts that pose little risk. They don’t. Instead, SRG swings for the fences every time out, opting for high-energy restaurants that feature imaginative design, a vibrant bar scene and buzzworthy food.

That’s what Sage has done again at its latest venture, Kachina Southwest Grill. Located inside the Westin Hotel in the Denver suburb of Westminster, Kachina is SRG’s 10th U.S. restaurant. Its doors opened in September.

“Kachina will be a go-to dining destination for both locals and visitors alike,” says SRG c.o.o. Peter Karpinski. “The restaurant will showcase the incredible flavors and experience of the Southwest in a vibrant, relaxing atmosphere, featuring the distinctive scene and subtly infused local vibe for which SRG concepts are known and recognized.”

The degree of difficulty Karpinski and SRG face here is high. It’s tough to make a hotel restaurant exciting, doubly so when it’s in the far suburbs like this one. Westminster is located 15 miles northwest of downtown Denver and almost halfway to Boulder. Kachina is designed to keep hotel guest dining dollars on property while becoming both a dining destination and watering hole for nearby locals. 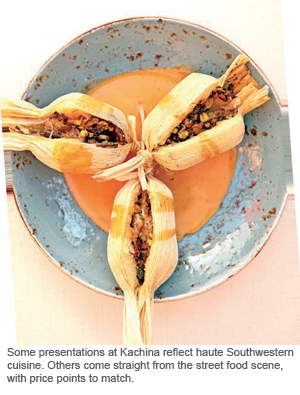 To make sure this happens, SRG and New York City’s crème design firm paid meticulous attention to detail in the restaurant’s public spaces. The result: Kachina’s color scheme, fixtures and artwork give guests the sense they’re deep in the American Southwest and have discovered a place that has  particularly good food and drink. The roomy restaurant has more seats in its bar (76) than its main dining room (66) and also has a 54-seat patio, a 44-seat private dining room and a 20-seat lounge.

Southwestern regional cuisine had its heyday in the late 1980s and early 1990s, when Santa Fe legend Mark Miller ran the seminal Coyote Café and Texas’s “Gang of Five” (Dean Fearing et al) took the area’s indigenous dishes upscale. But this type of food has been out of the spotlight for years, even while Americans became more adventurous eaters.

Chef Patrick Hartnett, a Coyote Café alum, shows Kachina guests what they’ve been missing. His menu embraces everything from $5 Navajo tacos and humble Mexican items to sophisticated Southwestern entrees and straight-ahead grill fare. Fifty-three choices cover a wide range of price points. Would that all hotel menus were as energetic.

The appetizer list kicks it off with five choices, including Texas Boar Croquettes ($11) and Shrimp and Avocado Tostadas ($9). The soup and salad offerings include two kinds of chili, green chile corn chowder (a cup is $6, a bowl $8) and three salads.

A Para Mesa (“for the table”) submenu of pass-around items, six in all, includes a Trio of Guacamoles ($9), Colorado Bison Empanadas ($8) and Huitlacoche Tamales ($10).

More from the menu

Vegetarians won’t feel slighted at Kachina. They can choose creative items like the Three Sisters (calabacitas-stuffed ancho relleno, huitlacoche ravioli, pinto bean jus, corn cream, $21). Guests in search of a no-frills meat entrée head for the “From The Grill” section to pick one of 10 wood-grilled items that range from a $12 chicken breast to a $47 bison cowboy ribeye. An in-house butcher shop processes whole animals sourced from local farmers and ranchers to supply these cuts. 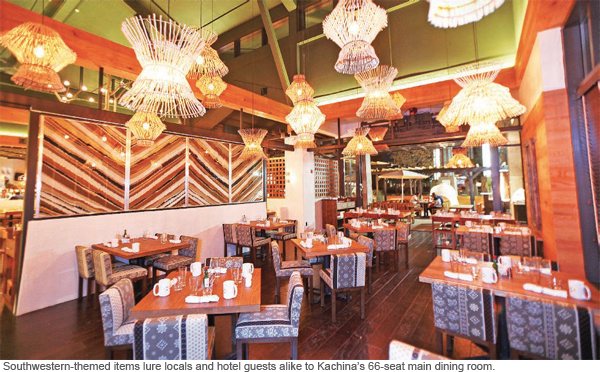 With Kachina, Sage Restaurant Group has created a destination-class dining and drinking experience that brings energy and visibility to what is, in essence, a suburban hotel that caters to road-weary businesspeople and travelers. It’s a trick other multiconcept operators would like to master.