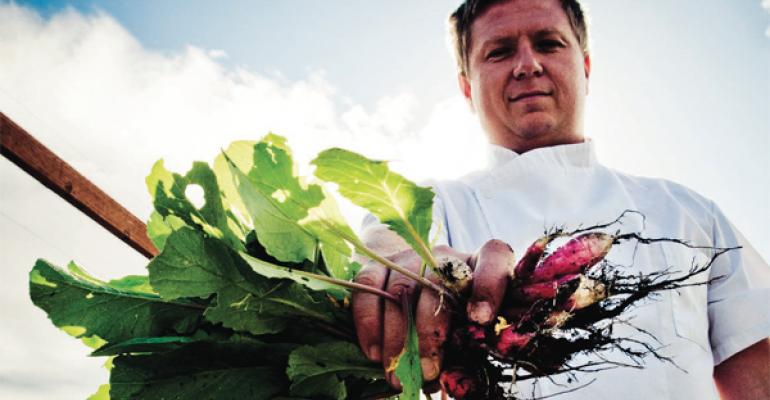 It took Jason Stoneburner almost 20 years to assume his first role as executive chef, but his journey to Bastille Cafe and Bar in Seattle has led to a nearly perfect neighborhood restaurant. &bull; See more New Restaurant Concepts

There are times when you see chefs in their restaurant and you can’t imagine them having worked anywhere else. In such cases, though, most have been on a long, arduous journey that eventually led them to this perfect place. And this place is nearly perfect because these chefs have found their culinary home.

That’s the feeling one gets watching the wildly talented chef Jason Stoneburner, who romances guests with his food and finesse at Bastille Café & Bar in Seattle. 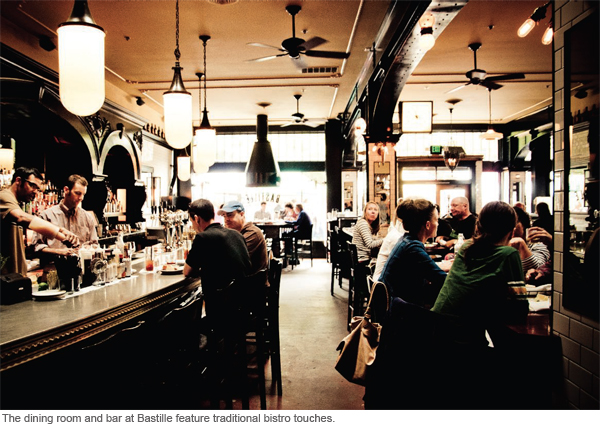 Bastille is a terrific reproduction of a Parisian brasserie. Owners Deming Maclise and James Weimann scoured the south of France to find pieces for the restaurant, items like 19th century sconces from a church in the French countryside, a clock that hung in a Paris metro station, a large buttress from a Paris church. What they could not find in the City of Lights, they found in their own backyard, including a back bar piece that was made in 1903 by a French craftsman living in Washington State. By all accounts, Maclise and Weimann have created a grand cafe with a French spirit in a cozy Seattle neighborhood called Ballard. But it’s Stoneburner’s handiwork in the kitchen that gives this place its soul.

Damn Good French Cuisine. That’s Bastille’s tagline and it suggests to those who are seeking a haughty French restaurant experience that they’ve come to the wrong place. There’s something unabashedly American about its bluntness, and it’s a promise that the unassuming Stoneburner lives by. His ever-changing menus reflect minimal interference with carefully sourced ingredients that are clean, pure and local. In fact, many of them were grown in the restaurant’s rooftop garden, which also houses bee hives that yield world-class honey. In fact, Bon Appetit placed Bastille on its list of Top 10 Best Roof-to-Table Dining. This down-to-earth approach is reflected in Stoneburner’s food and plating, where you’ll find huge flavors, but not an ounce of pretension.

Though he has no formal culinary education, the chef, at age 19, cut his teeth at the legendary Flagstaff House Restaurant in Boulder, and then later in the same city as chef de cuisine at 15°.  In 1998, he moved to Seattle to open Jeremiah Tower’s Stars restaurant. From there he gained momentum at several other highly acclaimed restaurants, including Campagne and How to Cook a Wolf. In 2009, Bastille opened and Stoneburner was named chef de cuisine. Early last year, nearly 20 years into his journey, the now 38-year-old Stoneburner assumed his first role as executive chef. Today, Bastille ranks among Seattle’s best restaurants.

“My whole life I’ve always worked under a head chef, but now I’m running the kitchen at Bastille and I couldn’t be happier,” says Stoneburner. “Thankfully, the owners have designed Bastille as a chef-forward restaurant. They have high expectations, but I’m pretty sure I’ve exceeded them all.”

Stoneburner assumed the executive chef’s post from opening chef Shannon Galusha, who had toiled at several restaurants, including The French Laundry. He says his approach to cooking is “a little less fussy” than Galusha’s, and he’s making a more concerted effort to source local ingredients. With a staff of 20 (cooks and dishwashers), Stoneburner runs a very efficient kitchen, with food costs coming in between 25-28 percent. “It’s all very simple cooking we’re doing here,” he says, pointing out that annual sales average $4 million.

Stoneburner controls the product, not just through careful sourcing, but by taking on a lot of the production in-house. His staff makes its own cheeses, vinegars, preserves, sausages and much more. None of what Bastille does is intended for show. “It’s all about purity of product and pleasing a very broad customer base,” he says.

“We attract some very sophisticated diners,” he adds, “but we also get a lot of people here who are seeing things they’ve never eaten before. I’m happy to expose them to new experiences, but I never want anyone feeling uncomfortable because they have to ask a lot of questions about the menu.”

Stoneburner’s menu is simply divided into four sections—Salades, Sandwiches, Petits Plats and Plates Principaux. The rooftop bounty supplies every menu section, though garden ingredients, many of them French heirloom varietals, shine most obviously in the salads. Consider, for example, the butter lettuce salad, which is graced with fava bean toast, a truffle-poached egg and green-garlic vinaigrette. Sandwiches are straightforward, but stylishly elevated, such as the croque monsieur, which features Duroc ham, aged Comte cheese and pain de mie bread.

In the small plates section, savory items make a strong appearance, including rabbit pate with pickled young fennel and violet mustard (Stoneburner makes the mustard, a specialty from the south of France). Another small plate, socca galette, is a chickpea flatbread from Nice that is served with marinated white anchovies, frisee, Picholine olives and a radish salad.

The large plate section is a who’s who of menu items from any French brasserie menu. Consider, for example, a roasted half chicken, which becomes extraordinary with Basque chili, leek & lovage veloute, marinated Tokyo turnips and arugula salad. As you might expect, the chicken comes from a local farm. In fact, what Bastille can’t produce in-house comes almost entirely from nearby farmers, foragers and fishermen. Daily specials are written on a mirror in the restaurant.

Stoneburner’s menu appeals equally to those who want a simple, inexpensive meal and to those who want a four-course dining experience before they head to the theater. For example, one could order a falafel sandwich or a croque monsieur for around $10 or steak frites for $25. The latter, by the way, is the most expensive item on the regular menu. By most standards, that makes Bastille a very approachable neighborhood restaurant.

With rivet-trimmed black beam arches and white subway tiles, the 180-seat restaurant is a soaring space that once housed a machine shop. The conversion cost about $1.1 million. Stoneburner’s open kitchen is located at the end of the main room. Nearby is a 45-foot zinc-topped bar. Across from the bar, a side patio is exposed to the main dining room when interior doors are swung open. The front window offers seating around a circular fireplace. A pleasant surprise is Back Bar, a speakeasy of sorts located down a narrow hall. Its focal point is a dramatic crystal chandelier and two paintings recreated from the originals by French symbolist painter Pierre Puvis de Chavennes. A woman in one painting represents the inspiration of the French Revolution, while a woman in the other depicts the Reign of Terror. Heady stuff to ponder while drinking a French 75.

Though it’s been open less than four years, Bastille’s dramatic interior has the air of a place much older. Yet it’s a truly modern restaurant, and its 4,500-square-foot rooftop garden is a perfect example of a restaurant on the cutting edge. The garden was installed and is maintained by Seattle Urban Farm Company. It has built raised-bed planter boxes that are irrigated and heated to produce dozens of lettuces, herbs, tomatoes, beans, radishes, cucumbers and more year-round. The bounty supplies the kitchen as well as the restaurant’s talented mixologists.

Stoneburner dictates which crops will be planted, while the restaurant staff does all the harvesting and thinning of beds. Earlier this year, the garden expanded from 9 tons of soil to 11 tons. “We’re getting to the point where this is no longer a rooftop garden . . . it’s a rooftop farm,” he says.

The garden is a huge source of inspiration for Stoneburner, particularly when it comes to creating more than a dozen daily specials. In many kitchens, that daily activity would be a daunting task, but it gets Stoneburner juiced.

“I love the challenge of creating all these new dishes,” he says. “It’s a very comfortable arena for me, and it keeps me sharp because I have to constantly be thinking about the menu.” The challenge also excites the rest of the kitchen staff, who frequently contribute to the list of specials. Stoneburner is quick to point out that not all of the specials are elaborate. “Many of them are very simple because we don’t want to mess too much with such beautiful produce.”

A significant part of the rooftop garden is the production of honey, which comes from four stacks of beehives, with 250,000 bees in each hive. Bastille has a beekeeper, though Stoneburner sometimes collects the honey himself. The honey is included in a number of menu items, and is featured prominently in a brine for pork bellies.

“I feel so fortunate to be working at a restaurant with so many resources,” says Stoneburner. “And I know so many chefs who don’t eat the way they cook at their restaurants. But the food I’m cooking at Bastille is exactly the kind of food I like to eat. It makes me feel more connected to the restaurant and my customers. I can’t ask for more than that.”

Not many people, whether they’re chefs or not, find themselves at the end of a long journey exactly where they were meant to be. But Stoneburner has found his way home, and for food-loving Seattle, that is a cause for celebration.