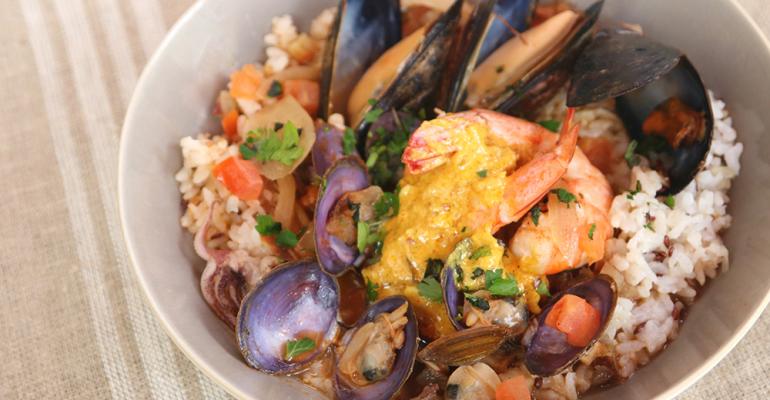 Concept by chef Mark Peel already has plans to expand

Prawn opened last week in the downtown Los Angeles Grand Central Market. The menu is built around Peel’s use of pressure cooking and steam kettles, which is designed to keep preparations simple, but flavors rich and complex.

“Seafood is wonderful in that it allows us to explore a world of flavors, while keeping the dishes simple and delicious,” Peel said in a statement. “Bringing classic nuances of elegant seafood to the fast-casual world is what I’m most excited about.” Peel is known for his years as chef and owner of Campanile in Los Angeles, which he closed after two decades in 2012. He also worked in some of the region’s top kitchens over the years, including Spago, Ma Maison, Michael’s and Chez Panisse.

He opened Bombo in 2015, which also emphasized seafood, but Prawn has a broader variety of seafood offerings at approachable price points.

On the menu is a warm albacore salad, with the tuna stewed in a curried shrimp broth with shiitake mushrooms and roasted onions, served on Napa cabbage and mustard greens in a preserved lemon-and-date vinaigrette, priced at $12.

The most expensive item is a Thai lobster roll, priced at $19, including Maine lobster stewed in a creamy curry broth with roasted onion and potatoes, spicy coleslaw and bacon rouille on a soft roll.

Wine and craft beers are available on tap.

Peel said he plans to open multiple locations of Prawn featuring on-site dining and to-go service with partner John Shin. The next location is scheduled to open in Pasadena, Calif., this summer.