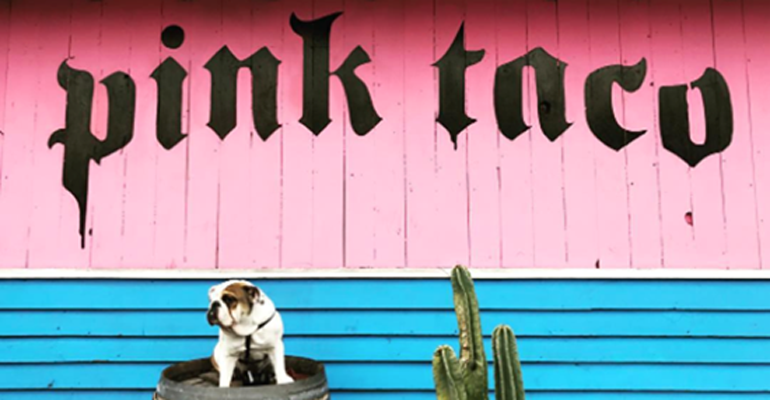 Pink Taco gets a second wind under Z Capital Partners

Operator plans to grow brand in Chicago, Miami and beyond

The owners of Real Mex Restaurants are planning to expand nationally the once-controversial Pink Taco concept, the company said Thursday. Pink Taco was founded in 1999 by Harry Morton, the grandson of Arnie Morton, who founded the Morton’s Steakhouse chain. Harry is also the son of Peter Morton, who co-founded Hard Rock Cafe. The original Pink Taco location, in the Hard Rock Hotel & Casino in Las Vegas, is still operated by Harry Morton. Z Capital owns the trade rights to the brand.

A second location, in Los Angeles, is operated by Real Mex, as will be all locations going forward, Barker said.

A reference to a slang term for female genitalia, Pink Taco was known for its edgy “day of the dead” design and heavy bar emphasis. Barker said the look is being reworked to create a more unique identity.

“Pink Taco has been copied quite a lot, and the ‘day of the dead’ has played out,” she said.

“This is a fun-loving culinary concept that’s about being yourself, whoever that is, and being empowered and keeping it real,” Barker added. “It will be interesting, eclectic and irreverent, but welcoming to all. We’re not just appealing for a guy’s night out.”

Music will continue to be a big part of Pink Taco, she said. Food will highlight seasonal ingredients with vivid colors and flavors.

As the chain moves into new markets, the Pink Taco truck will precede all openings to generate buzz, Barker said.