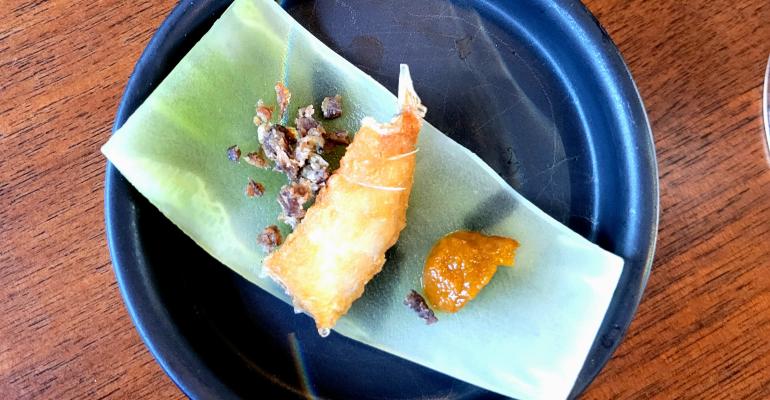 With Koko Ni, the chef fuels his culinary creativity

Award-winning chef Paul Qui has been cooking, opening restaurants and making headlines for more than a decade. Now, the Texas chef has hunkered down in Denver to open Koko Ni, a modest-looking restaurant serving an elevated tasting menu of Japanese-influenced, new American cuisine.

“The culinary scene here in Denver was really inspiring, but more than anything, I guess, I need this project for me to be in the restaurant industry,” said Qui, who, like many chefs, felt burnout from the COVID years. “It's about that passion for food, that respect for food, and the collaborations.”

But two-and-a-half years ago during the pandemic and pending recession, Qui said he wouldn't have dreamed of opening a small, high-end dining operation. But things change, he said, and now his main goal is to get back to the roots that made him love cooking in the first place.

"I don't know if it's the smartest of things to do, but it keeps me going," he added. "There are other projects that are more lucrative, but I crave this kind of action for my own sanity."

Right now the goal of Koko Ni is less about making money and more about fueling creativity, the chef said. In fact, Qui opened the 20 seat restaurant (soon to be 27) at the end of  October, despite not having a liquor license, which has been delayed for months. While the restaurant misses out on the revenue from selling alcohol, Qui decided to open anyway to help retain staff and get the word out.

"Wine pairings are a big point of our sales model, but when I weighed it against losing my staff, it's worth the [monetary] loss," he said, adding that before they opened, his team was working part-time jobs while they waited for Koko Ni to start.

Chef de cuisine James Gnizak is one of those employees Qui didn't want to lose. A lot of the work sourcing from local farms and sustainable fisheries and ranches comes thanks to him, and it shows on the menu. Modeled after a Japanese omakase where the chef chooses each course, guests can expect to be pleasantly surprised as dishes come out, quicker than a fine-dining operation, but with no less pizazz.

One night that may mean starting with delicate sunchoke chips and a light dip, then getting Mark's Bouquet, a mixture of crisp vegetables, burnt onion oil, badger beet nam jim (Thai dipping sauce) and sal de chapulines (grasshopper salt). The dish is named for Mark DeRespinis, one of Koko Ni's main farmers who runs Esoterra Culinary Gardens, a favorite supplier of Denver chefs.

Next, guests might be treated to a plate of tender pasta stuffed with pumpkin and served with chunks of sweet lobster, followed by a tender lamb chop with a side of charred puntarella chicory.

Each plate comes carefully thought out, and looks like a work of art. But presenting an intricate, ever-changing menu like this can be tricky because the quantities are small and produce super fresh. Qui said he and Gnizak are working to balance out costs of food with what the chefs want to create. The best way so far, he said, is to give Gnizak a set amount to spend each week on fish, meat, and produce.

"The prices always change. It's a lot of mom-and-pop purveyors, and the invoicing and billing isn’t always there, and you may get a surprise bill that you didn't prepare for," said Qui. "But it's worth it."

To book a seat at Koko Ni guests have to pay in advance via the online system Tock. Currently tickets are $110 each, and include 10 dishes ranging in size from single bites to larger plates.

"Right now it's definitely a great deal for the guest at $110, but I am hoping to get the ticket price up," said Qui. "I know it's not the most approachable concept. It's more a passion project, and I am very careful to nurture that."

Not only has Koko Ni been a concept Qui has worked on over the last year at the current location, but it started as a semi-pop-up at Zeppelin Station, a food hall also in Denver. Qui originally came to the Mile High City to open up a Filipino-focused iteration of his popular Austin eateries, East Side King and Thai Kuhn, inside the food hall. He did that for a while, but the concepts never fully settled.

The idea of Koko Ni came because Qui was sick of making burgers and fried chicken.

"A big part of it was I got tired of selling fried chicken, rice plates, rolls, and salad bowls [at Zeppelin Station] and we needed a creative outlet," said Qui. "Working with younger chefs like James, the whole team, it rejuvenates me, rejuvenates the passion."

They started Koko Ni upstairs at Zeppelin Station, a space usually reserved for special events that worked more like a lounge and bar than a restaurant. It lasted a few months before COVID hit the team, followed by a cease-and-desist letter from the fire department. It turns out it's illegal to operate a kitchen in an area without the proper infrastructure.

Not to be deterred, Qui took over the RiNo location of Lea Jane's Hot Chicken, and built it out to be Koko Ni. That was in January of 2022, shortly after FAM Hospitality pulled out of Zeppelin Station permanently, where, over the past two years, it had put in various concepts.

Ten months later the team is still waiting for that liquor license. But that hasn't slowed down the food.

"Even without a liquor license we had to open," said Qui. "It wasn't even about paying the bills and rent, it was about keeping the staff inspired and having them keep on honing their skills."

Now the staff does it all. Because of restaurant labor shortages, the back of the house currently is serving the front, too — not a bad idea given the nature of the dishes. Usually it's the chef that made the item that comes out to talk about it, giving an intimacy to the elevated experience.

As for the name, Koko Ni means "here" in Japanese. After all, Qui said, once you're seated at the restaurant, you are here. And hopefully soon, the wine will be here too.