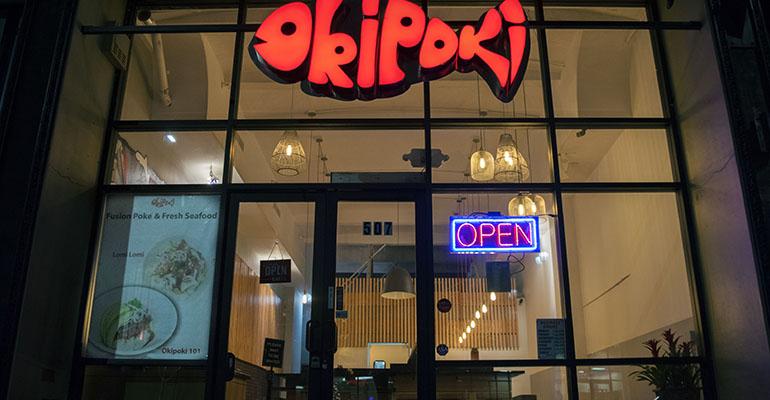 Southern California is going a little crazy over poke and Steve Chen hopes to take advantage of that trend with a tiny new restaurant featuring an almost-all-poke menu called Okipoki.

The downtown L.A. restaurant features an intimate U-shaped bar with only 19 seats wrapped around the poke chef, who prepares a lineup of Japanese-inspired dishes focused on sashimi-grade raw fish.

In Hawaii, where poke is a popular starter, the dish usually is based on tuna. Okipoki, however, offers tuna as well as hamachi yellowtail, salmon, scallops and shrimp.

The rotating menu, depending on what’s in season, might include dishes like the Bang Bang, with tuna, charred pineapple, caramelized onion, Thai basil and garlic chips; or the Hama Time, with hamachi yellowtail, citrus soy, edamame and watermelon radish. The menu also includes various seafood starters, like oysters, shrimp and shooters, which might include a combination of uni, tuna tartar and scallops, for example.

“We’re taking poke and turning it into more of a raw seafood bar concept,” Chen explains.

The goal was to elevate poke with more chef-driven recipes, but still ensure it was accessible, he adds. Chen has positioned the restaurant as fast casual.

Okipoki’s poke bowls range in price from about $10 to $14, and they’re designed to be a meal, rather than an appetizer.

“People are taking interest in this trend in part because it’s healthy, and it’s good for people who love sushi but they don’t want to sit for too long, or they want something quick or affordable,” he says. “Part of the experience is being able to watch the chef make it in front of you.”

Okipoki has no alcohol. Instead, the beverage menu focuses on teas and fountain drinks.

Chen, Okipoki’s owner and managing partner, was born in Taiwan and raised in Vancouver. He originally came to L.A. to attend the University of Southern California, and over the last five years he served in the Taiwanese military and helped with his family’s business manufacturing and distributing lighting for cars. Okipoki is his first restaurant.

Chen says he’s confident the concept will survive any passing trend, though the L.A. area has seen a growing number of playfully named poke restaurants pop up, mostly with a build-your-own bowl model. The two-unit PokiNometry, with locations in Hollywood and Anaheim, CA, for example, allows guests to build their own poke bowl. In Garden Grove, the Low-Key Poke Joint opened earlier this month. North idsn San Jose, the Go Fish Poke Bar launched in November and Poki Bowl opened in July, just to name a few.

Chen says Okipoki will stand out as “something more gourmet," adding "I wanted to take it more upscale, to make poke bowls a bit fancier with fresh fish, more garnishes and vegetables and make it more chef-driven. There’s a lot of room to grow.”