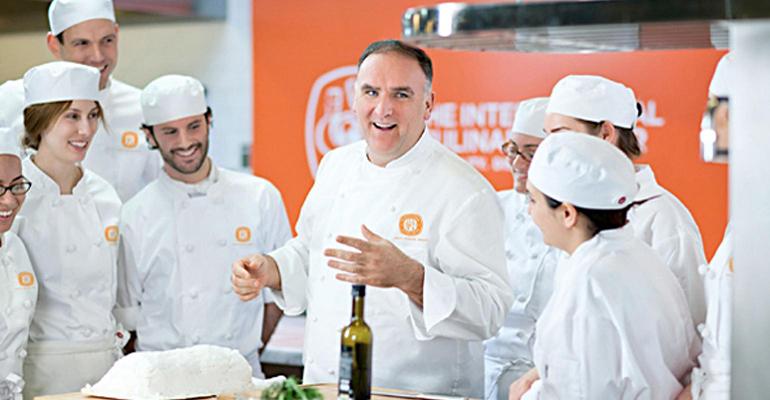 Chef and restaurateur José Andrés will partner with his compatriot culinary stars Ferrán and Albert Adrià to create a Spanish food hall in the Hudson Yards project in New York City.

The concept, which is scheduled to open in late 2018, represents a long-awaited collaboration that will bring the Adrià brothers to the U.S. for the first time, Andrés’ ThinkFoodGroup said Tuesday.

The Adrià brothers are known for El Bulli, their restaurant in Spain, which was considered to be one of the world’s finest before it closed in 2011. Ferrán Adrià has continued to promote gastronomic innovation through his El Bulli Foundation.

When El Bulli closed, Albert Adrià launched the El Barri project with Tickets, the first in a series of six restaurant concepts in a joint venture with Cirque du Soleil in Ibiza, Spain.

The venture in New York will be in partnership with Related Companies and Oxford Properties Group, which is developing Hudson Yards. Overall, the massive mixed-use project will include more than 18 million square feet of commercial and residential space, including a collection of restaurants curated by the famed chef Thomas Keller.

Within the project, Andrés will develop 10 Hudson Yards, which will include 35,000 square feet of indoor and outdoor space that will become what the company describes as a “dynamic, all-day destination for Spanish food, drink and culture, as imagined through the inimitable, unconventional lens of these three culinary innovators — a fresh, groundbreaking take on the food hall concept, featuring the very best that Spain has to offer.”

Among the offerings will be a tapas bar, a market offering Spanish jamón or olive oils, wood-fired paella and wine, the company said. It will be Andrés’ first restaurant in New York.

“I’ve dreamed of opening in New York since I first came here as a boy of 19, and I cannot wait to tell the story of Spain to my adopted home of America in this iconic new neighborhood,” Andrés said in a statement.

“And to do this with my friends, my mentor Ferrán and his brother Albert,” he added, “[is] such an honor and so much fun!”

The Adrià brothers added in a statement: “We have long wanted to find an official way to create magic with José, and now we have it and can’t think of a better way to debut in America.”

Based in Washington, D.C., ThinkFoodGroup operates 27 restaurants around the U.S. and in Mexico City, including Jaleo at The Cosmopolitan of Las Vegas, The Bazaar in Beverly Hills, Calif., and Minibar in Washington, D.C. The group also operates the vegetable-forward, fast-casual chain Beefsteak, with five locations.

Hudson Yards will also include restaurants by Thomas Keller, along with chef and restaurateur Costas Spiliadis and the London-based restaurant group D&D London.