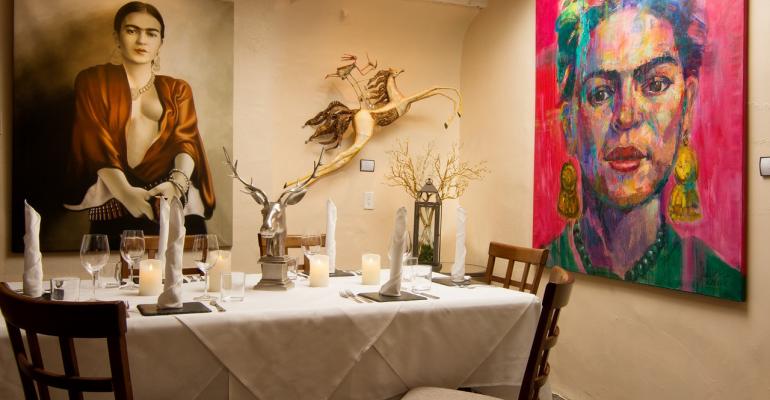 Fernando Olea got personal at Sazón

New Mexican chef Fernando Olea has been in the restaurant business since 1991, and over the years he has tweaked, played with and evolved his idea of what kind of food to serve. With Sazón, he's made a truly special place that's helped earn him the 2022 James Beard Award for Best Chef Southwest.

"We have created, as I describe it, a magic space that's a lot about personal touch," said Olea in an interview. "The biggest awards are the ones I get with my diners every night, and even though I cannot hang it on the wall, it's something that energizes me."

Sazón is an upscale eatery in Santa Fe that opened in 2015. While at first glance the menu looks influenced purely by Olea's Mexico City upbringing, the dishes are actually a culmination of his heritage, the city he has lived in for more than 30 years, and interesting techniques and ingredients from countries across the globe.

"My culinary adventure starts with the flavors of Mexico that I rescued from the cuisine of my family, and then I incorporate many flavors from around the world," said the chef, who prefers to have his menu described as world cuisine, not just Mexican. "Food doesn't have borders, and that is reflected."

At Sazón, the specialty is an old world-meets-new-world mole, which has more than 20 ingredients. This can be found on the regular menu, along with dishes such as shrimp enchiladas topped in a creamy sauce made with zucchini blossoms; salmon wrapped in filo dough with huitlacoche and jasmine rice; and the Cholula, Olea's New Mexican take on Chile en Nogada, which features poblano chiles, ground lamb, pork and beef with nuts, dried fruits and spices over a cold, creamy walnut and pomegranate seed sauce and a jalapeño-balsamic reduction. Large plates run between $32 and $55, and appetizers, soups and salads cost between $15 and $28.

There's also the daily degustación tasting menu featuring around eight of Olea's favorite dishes. The meal costs $150 per person, takes around three hours to enjoy, and may showcase items such as a three-cheese stuffed zucchini blossom with ginger aioli and chocolate balsamic; California white sea bass with mole verde; and octopus spiced with Thai chile and pancetta.

While the food shines on its own, the addition of Mexican wine and spirits makes a meal stand out more. Order from the menu or, when doing the degustación, pair a curated selection of tequila, mezcal and wine for an additional $100.

And it's not just the restaurants where Olea shines. For the 100-year anniversary of Santa Fe being a capitol city, he created a mole in honor of the occasion. This dish included New Mexican staples such as apricots, pine nuts, pecans and New Mexican red Chimayó chiles. More than 10 years later, Olea still makes this mole and serves it today.

"My cuisine, it is the result of being connected," he added. "I get inspired, and that's tasted in my mole."

Before Sazón, Olea's first venture into the food world was with Bert's Burger Bowl, a place that opened in Santa Fe in 1954 and was known for hamburgers. He bought the iconic place in 1991, continuing to serve the famous green chili cheeseburger.

At that point, Olea didn't have any experience in the restaurant world, let alone professional chef work. He said he always did some cooking, but nothing like he does now. With the Burger Bowl, Olea wanted to bring in the Mexico City street-food scene and started doing different tacos. He quickly found out that venue wasn't right and went back to the basic burgers.

"It's a very gringo name, but the reason I called it that was because, by working at the Burger Bowl, everyone thought my name was Bert," he said. "It was a great place."

By the beginning of 2000, Olea decided he wanted to move up and go into formal dining. He closed the taqueria and opened La Encanto in a former convent. Unfortunately, he said, it launched right around September 11, 2001, and the restaurant never took off.

In 2014 Olea also decided to close the Burger Bowl, not because it wasn't popular, he just felt it was time. He also wanted to put all his resources into opening Sazón.

"You need to realize where you should put your time," he said, "When we opened Sazón it was at a time that American people started paying attention to Mexican food and Mexican spirits and Mexican wine."

Food and drink isn't the only thing that makes Sazón stand out. The whole space is decorated with art by Mexican artists. A lot of it's for sale too, so don't be surprised to find a favorite portrayal of Frieda Kahlo with a revolver gone and a new image in its place the next time you visit.

"I have a business partner, Suzanna Becerra, she curates the art and it captures the essence of Mexico," said Olea. "She captures that and it pairs nice with my cuisine."