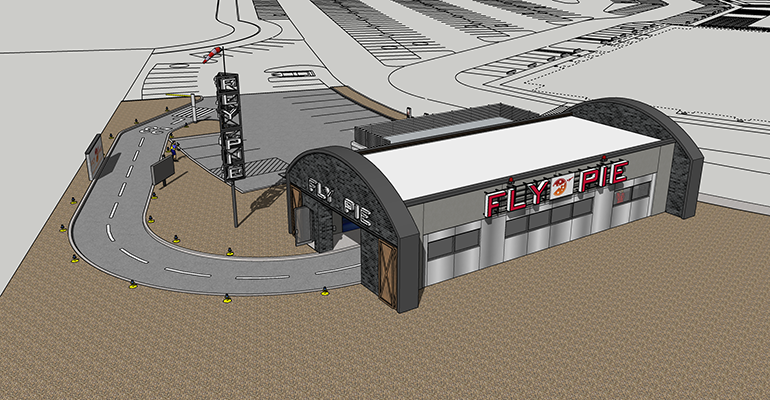 Fly Pie, drive-thru pizza with a side of 'eatertainment,' planned for Las Vegas market

The creator of the “CSI” television franchise is partnering with some restaurant industry veterans to create a new, airplane-themed drive-thru pizza restaurant that incorporates unique entertainment elements.

The first Fly Pie is scheduled to open this April in Henderson, Nev., said Anthony Zuiker, who has teamed up with local restaurateur Scott Godino Jr. to develop the concept. Godino operates two tavern-style restaurants in the Las Vegas market called BAR — Born And Raised — which have received local acclaim for their menus.

Zuiker was the creator and executive producer of the “CSI: Crime Scene Investigation” TV series and now operates a publishing company with his wife, among other ventures.

Joining them is John Polizzi, a veteran of Planet Hollywood and other concepts, who was recently named to assist with the rollout of Fly Pie. Plans call for opening a handful of corporate locations before launching a franchise-based expansion program nationwide.

In addition to drive-thru pizza — made to order in super-hot ovens in less than three minutes per pie — Fly Pie will also distinguish itself with its airplane theme and its animated short films, written by Zuiker, for which he has created a cast of 10 food-themed characters based on menu items.

The restaurant itself, which will offer drive-thru, pick-up and walk-up service, is shaped like an airplane hangar. Customers approach on a “runway,” place their orders and then pull into the hangar to watch a 65-second animated “in-flight” movie. Scents of pizza, cinnamon (for the churros) and bacon (for the loaded fries) accompany the films, while car exhaust is pumped out by fans to protect the air quality.

Other visual flourishes include an area near the pick-up window for making TikTok videos and a wall where customers can take selfies with images of the Fly Pie characters. The restaurant will also include a mural that will be repainted every three months by local graffiti artists to reflect current events that are important to the community.

“We aspire to do things in the pizza space that are viral,” said Zuiker.

The restaurant will strive to create a new niche in the industry he called “culinary casual” — high-quality food in a speedy, drive-thru format. Aaron Raeder, a veteran of BAR who previously worked at Maggiano’s Little Italy, the Harley Davidson Café and other concepts, oversees the kitchen as the chef for Fly Pie.

In addition to pizzas cooked to order, the initial menu will include chicken wings, loaded fries, garlic knots, churros and deep-fried Oreos. Plans call for adding some salad options in the future. The company is projecting check averages of around $26-$28 per order, assuming a family of four orders two pizzas, dessert, loaded fries and a beverage.

In order to make its pizza dough taste like New York-style artisan pizza, Fly Pie invested in a New York Water Maker machine that replicate the water from other parts of the world; in this case the company will use water similar to that of New York, Connecticut and Napoli, Italy, because the pH levels are all similar, Zuiker said.

Fly Pie has raised more than $2 million, mostly from friends and family, through a private offering of 80 shares at $28,000 per share, most of which have been sold. Among the investors is the founder of Xtreme Cubes Corp., which is manufacturing the modular Fly Pie restaurants off-site as a cost-saving alternative to traditional build-on-site construction.

After the first restaurant, the company expects built-out costs to be between $1.4 million and $1.6 million per location, and is aiming to limit franchisee development costs to $1.2 million to $1.5 million.

Zuiker said Fly Pie will focus on providing a high level of service in the drive-thru, taking cues from Chick-fil-A, such as having workers come out to take orders while cars are in line. It will also have a mobile app with a loyalty program and the ability to order for pickup or delivery through third-party delivery services. The app will also serve to provide information, such as which movies are playing at any given time.

“We are looking at the entire industry to see what’s done at a high level, and improving upon that,” said Zuiker.

Diversity and inclusion will be important to the concept, Zuiker said. Workers will be able to select patches for their airline-themed uniforms that help express their individuality, with slogans such as Black Lives Matter and LGBTQ. Plans call for allowing workers to select a new patch to add every three months.

“We think it’s important to empower you to be who you are,” said Zuiker. “Everyone’s welcome at Fly Pie.”

The restaurant will also offer a unique way for customers to support young authors and local education through a program called “Fly Me to the Moon.” Customers who round up their change to the nearest dollar will have the opportunity get $250 back in their to-go bag when the total collected reaches $500, with the other $250 going to Zuiker Press, a graphic novel company run by Zuiker and his wife that works with the National Writing Project to provide free, issue-based books and lesson plans to teachers.