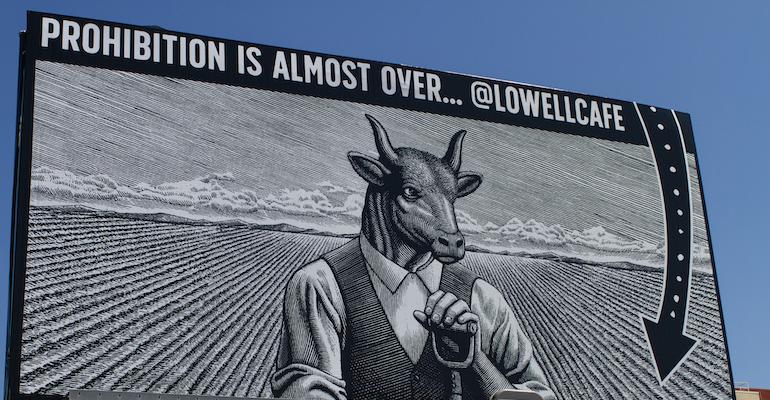 First restaurant with cannabis on the menu to open in September

At Lowell Café in West Hollywood, Calif., guests will be able to have a toke and a sandwich

The first of several restaurants in California that will legally have cannabis on the menu is scheduled to open in West Hollywood next month.

Lowell Café will be open for lunch, dinner and late-night service offering a full menu of appetizers, small plates, sandwiches, salads and entrees, alongside a “flower menu” with an array of cannabis products that can be smoked in various forms, pre-packaged edibles and concentrates.

Kevin Brady, Lowell’s general manager, said Lowell is expected to be the first of eight restaurant and lounge concepts that will allow onsite smoking, vaping and consumption of edibles that won the first round of business licenses from the incorporated city of West Hollywood under an ordinance passed in 2017. Another eight licenses were awarded to businesses with a foodservice component that will focus on edibles only.

Colorado, another state with legal recreational cannabis, also recently opened the legislative door for cannabis lounge concepts, so many in the industry will be watching how operators like those behind Lowell Café do it. Brady is first to admit it’s a whole new world, with many challenges to overcome. 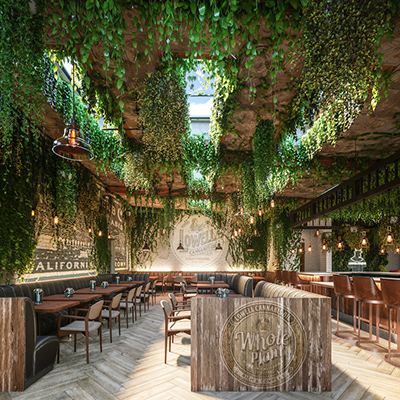 “I’ve opened lots of restaurants and nightlife venues, and there’s a roadmap for that. But there’s no roadmap for this,” he said.

Recreational cannabis use is legal in California, but state laws prohibit consumption in public spaces. The goal in West Hollywood was to create safe and equitable places to consume socially, but also to create an opportunity for tourists to experience the burgeoning cannabis culture on visits to Los Angeles.

The plan is for guests to arrive at the cafe — preferably by ride share like Uber and Lyft, but valet parking will be available — and enter the 220-seat restaurant which will also be a dispensary, stopping first at security where all IDs will be checked. The venue will be for those 21 and older only, and it is designed around an enclosed patio with no windows to the outside.

After that, the experience will be similar to any other restaurant, said Brady, a Cornell University alum who worked previously as director of restaurants with Tao Group Hospitality in Las Vegas and LA. 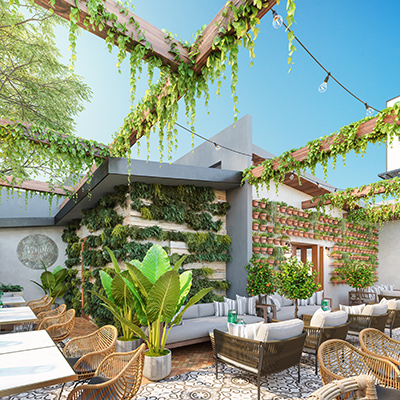 The menu at Lowell is being developed by chef Andrea Drummer, a private chef with a celebrity clientele and author of the book “Cannabis Cuisine: Bud Pairings of a Born-Again Chef.” Brady said they were still in research-and-development mode, so he couldn’t reveal specific menu items, but generally the menu will be hyper seasonal. There will be small bites and appetizers for around $10 to $24; sandwiches around $15 to $20 and entrées around $25 to $36.

“We know there will be people coming from all over the world and excited to try cannabis tourism, so we want to make sure we’re approachable from all different price points,” he said.

In lieu of a cocktail menu, however, will be the “flower menu,” which will be served by a “budtender” or “flower host” who will guide guests through the experience. It’s not so much about pairing flavors, Brady said, but educating guests about the products and various ways they can be enjoyed, from joints and bong hits to vapes and concentrates.

Brady said that, unlike alcohol to which restaurants apply a liberal markup, the cannabis products at Lowell Café will be sold at close to retail pricing. Guests have accepted that their favorite bottle of wine is $10 in a grocery store but $30 in a restaurant, but he doesn’t think that will be true for cannabis. 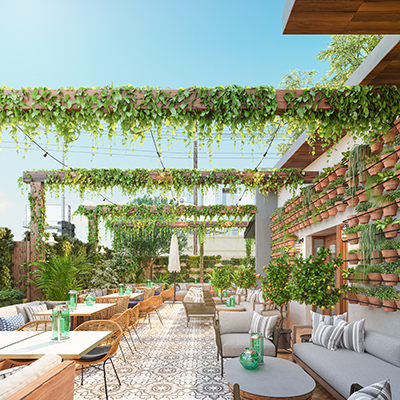 Lowell Café, however, will mostly be alcohol free, at least in the areas where cannabis is served, Brady said. The restaurant has applied for a transfer of the beer and wine license held by the previous restaurant in the space, but that permit would only apply to a small patio to accommodate guests who want to try the food menu without the cannabis.

Lowell will not be able to accommodate guests who want alcohol and cannabis at the same table. “There are some aspects of it where the law is very clear,” he said.

But the concept will appeal to those who call themselves “California sober,” who have given up alcohol and its next-day hangovers in favor of cannabis, which many say has little-to-no after effects.

Lowell Café will be different from typical restaurants in several other ways.

The restaurant will have an aggressive air-filtration system, for example, to suck away smoke fumes, he said. Live plants growing throughout the venue are also designed to help clear the air.

There will be a number of security guards during all hours of operation, which will serve as an extension of the host team, Brady said. They are meant to help guests feel welcome and safe, not serve as bouncers. “There won’t be a whole nightlife vibe where they’re throwing people out,” he said.

Developing the café has also required a higher-than-normal investment in legal fees and consulting, he said. In a way, cannabis is treated “like a nuclear weapon,” he said, making it difficult to find partners who want to be part of the project.

For example, because cannabis is still illegal on a federal level, the banking component is still evolving, Brady said. But guests will be able to use credit and debit cards at Lowell Café.

“It’s challenging because so much is unknown. There are preconceived notions and people who don’t even want to start a conversation or work with you,” said Brady.

“I started this with a full head of hair,” he added, indicating that is no longer the case. “But people see this as proof of concept. It will be interesting to see how it evolves moving forward.”