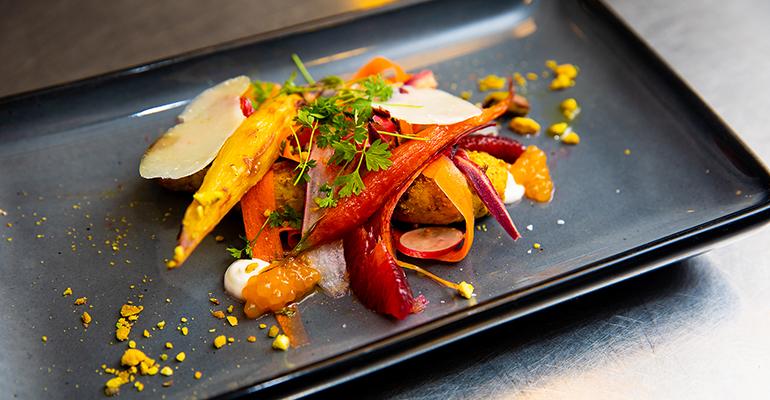 Restaurateurs seeking to make sense of the complex regulations around the use of cannabis- and hemp-derived products such as cannabidiol (CBD) might want to take a double dose of the stuff to reduce their own anxiety.

The 2018 Farm Bill legalized hemp production in the U.S., which makes hemp-derived CBD easier to obtain. But the Food and Drug Administration — which considers it a drug — has yet to approve it for consumption. Various states, meanwhile, have enacted a patchwork of regulations that allow the sale and consumption of CBD under certain circumstances, and those rules are evolving in fits and starts.

In May, the FDA held its first-ever hearing on CBD, which many in the industry hoped would set the stage for federal approval. Public comments may be submitted through July 2, but it is expected to take several months — if not years — before a legal framework for the use of CBD is defined at the national level. FDA Deputy Commissioner Amy Abernathy is leading an agency working group to explore the impact of CBD on public health and potential pathways for it to be marketed legally.

It appears the agency may be taking a cautious approach, said Angela Spivey, a partner in Atlanta-based law firm Alston & Bird.

Acting FDA Commissioner Norman “Ned” Sharpless said during the May hearing, “There are important reasons to generally prohibit putting drugs in the food supply,” noting that CBD was "no exception."

Sharpless’ questioning appeared to raise doubt whether he sees a pathway forward for CBD in food and dietary supplements, said Spivey.

“I think the hearing was a little discouraging for a lot of people hoping for more uniformity across the entire United States on a federal level,” she said.

Some of the research presented at the hearing raised concerns about widespread inconsistency in the purity and authenticity of the CBD that is currently on the market, and some observers said there remains a need for more testing of the compound.

However, both federal and state regulators are grappling with the fact that CBD is tremendously popular — some 65 million consumers have already tried it, according to a presenter from Consumer Reports magazine at the hearing, MarketWatch reported. CBD is widely believed to help reduce anxiety and inflammation and perform as a sleep aid, among other benefits.

Complicating matters for restaurant operators is the fact that CBD comes in various forms that may or may not contain traces of THC, the psychoactive cannabinoid in cannabis, and the fact that many states that allow the sale of cannabis-derived products do not allow them to be consumed in public spaces.

Several other states are in a gray area where regulators may or may not look the other way when it comes to CBD, while other states have been treating it more like a controlled substance.

Some states and municipalities, including Maine and New York City, have prohibited the sale of CBD edibles at retail, pending further study.

“Some states specifically say CBD is not allowed in food as an additive,” Spivey said. “So in those cases we would advise restaurants not to add CBD-infused products to their menu. It really does come down to a state-by-state assessment and where the restaurant is located.”

At the federal level, thus far the FDA’s enforcement actions have been confined to product manufacturers that have made claims about CBD’s medical benefits, particularly with regard to serious diseases such as cancer.

“They've made it pretty clear they are not going to exercise enforcement really outside of those types of egregious health claims,” Spivey said.

The U.S. Department of Justice policy towards cannabis has also fluctuated among attorneys general, Spivey noted. Current U.S. Attorney General William Barr appears to have taken a different position than his predecessor, Jeff Sessions, and will likely not prosecute if an entity is complying with state law, she said.

Spivey strongly suggested that operators verify the quality and integrity of the CBD they procure, given the widespread variability and inconsistency of the products on the market. In addition, she urged restaurateurs to source CBD from within their own states, or from adjacent states that have legalized CBD sales, to avoid violating federal prohibitions on interstate trafficking.

In Massachusetts, which approved recreational use of marijuana beginning in 2016 but has not yet explicitly allowed the sale of CBD in food, some operators have already tested the CBD waters. 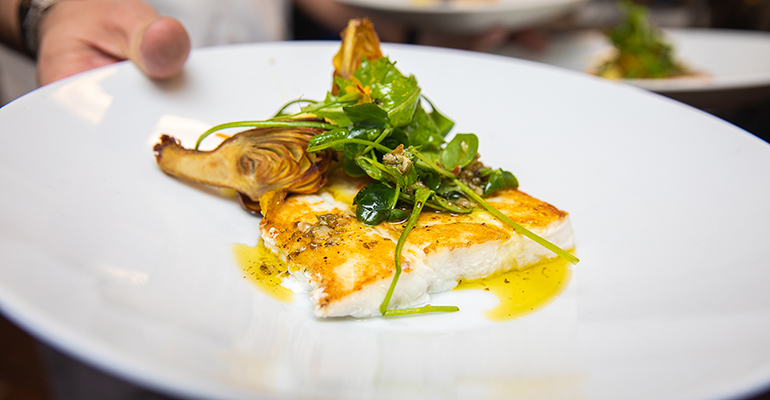 “We wanted to try to test the market,” he said. “We know that at some point in the future cannabis is going to be a bigger conversation, particularly in restaurants, so we just wanted to do it to learn a little about it ourselves, and so our consumers know that we are trying to be on the leading edge of what's going on.”

Although Trade cleared the dinner with its attorneys and consulted with the Massachusetts Restaurant Association — where Papachristos serves on the board of directors — about the legality of the dinner, the state has since issued a blanket warning about such events.

“Our attorneys reached out and said, ‘FYI, if you are thinking about doing something again in the future, there might be some more red tape,’” he said. 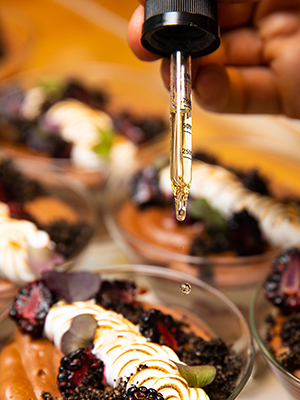 In addition, the state Alcohol and Beverage Commission has prohibited the use of CBD in alcohol, he noted.

“We are fine with that,” said Papachristos. “We strongly believe it's just going to be a matter of time before not just CBD but even THC becomes part of the experience on some level in restaurants.”

The four-course dinner at Trade included several dishes infused with hemp-derived CBD, and the restaurant posted a disclaimer noting that the CBD used had less than 0.3% THC. Afterwards, many of the guests stayed to talk about CBD with the restaurant staff and the CBD experts.

“I think it was a great learning experience for everyone — not just us, but also for our guests who came in,” said Papachristos. 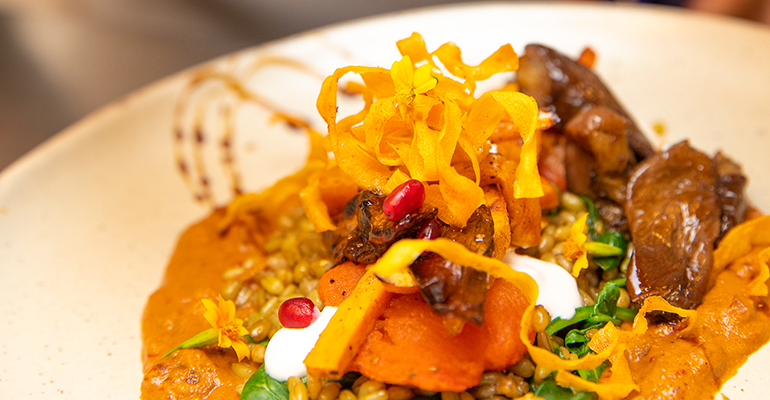 He said the restaurant is not in any hurry to test another CBD dinner just yet, however.

“We don't want to poke the bear,” he said, but noted that he was confident that cannabis-derived products would gradually enter the mainstream.

Putting the CBD in California cuisine

He said he is avoiding regulation around the sale of such products by charging for admission as an event, rather than charging for individual dishes, which guests can order with or without CBD and and other cannabis-derived infusions.

“I'm not charging anyone for cannabis, or alcohol, or even food,” he said. “They're paying to come and sit down at the dinner party.” 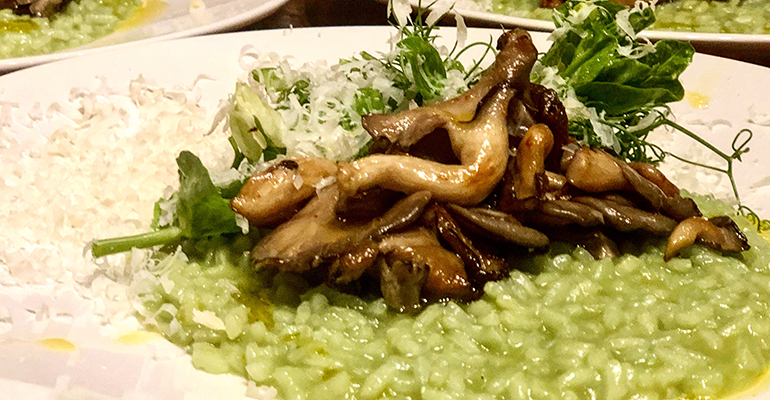 He noted that regulations are changing in California to allow more “consumption cafes,” but there are still tight restrictions. In Los Angeles, for example, several restaurants had been offering CBD-infused cocktails, but those were banned once the state adopted laws around the legalization of recreational marijuana, Ziegler said.

Ziegler takes a technical approach to CBD extraction that he said makes the compounds ideal for use in edibles. By using a high-pressure low-temperature extraction, he is able to isolate individual compounds, such as the terpenes, that flavor his dishes. 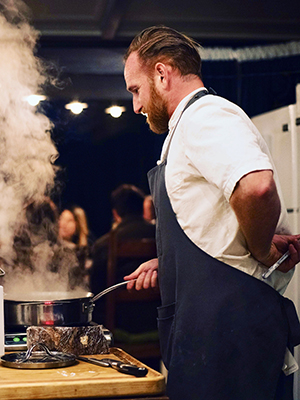 He recently created a snap pea and mushroom risotto dish, for example, for which he juiced sugar snap peas and mixed the juice with terpenes extracted from the Green Crack cannabis strain, and then added it to traditional risotto, along with goat butter and Reggiano cheese and topped with wild morel mushrooms.

"Morel mushrooms and peas are a classic combination, and I’m just reinventing it, and adding in the terpenes and the flavor from the Green Crack,” Ziegler said.

Even in states where marijuana has long been legal for both medical and recreational use, it can still be a challenge for restaurant operators to incorporate cannabis products into their menus.

Unika Noiel, the former executive chef at Che Sara Sara in Seattle, began making cannabis-infused edibles about 10 years ago after the state of Washington had legalized medical marijuana. After marijuana was legalized for adult recreational use, she began hosting pop-up dinners featuring cannabis-infused foods, including CBD-infused dishes. 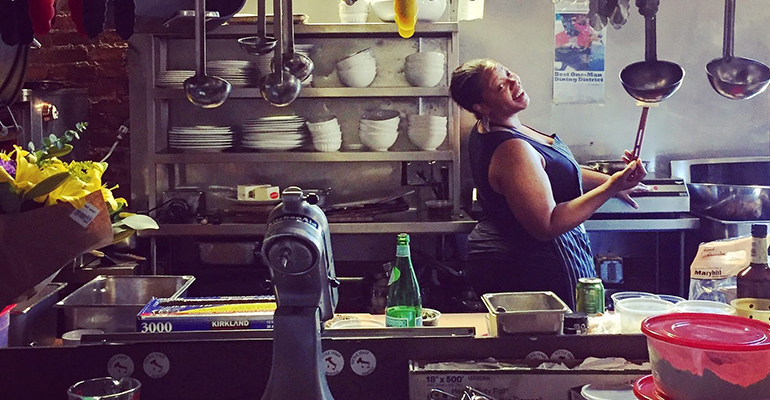 The city of Seattle, however, wasn’t keen on the idea, and asked her to pull the plug on the popular dinners, which she conducted and promoted through her own Luvn Kitchn business. She agreed that the business would no longer host its Luvn Kitchn Fellowship dinners until it obtained a cannabis business license.

However, “no cannabis business license currently exists, so until they create the license, there’s no way for me to be in compliance,” Noiel said.

She said she has been active in supporting the legalization of so-called “public consumption spaces” in Washington. Such venues would allow the consumption of cannabis products in public spaces, which is currently not allowed in Washington but has been gaining some traction in other locations, including municipalities in California and Colorado.

“I hope someday to be able to do that, and do it here in the state that I love, and not have to move to California or Colorado,” said Noiel.

Noiel, who recently appeared in an episode of the culinary cannabis TV show “Bong Appetite,” continues to cook private cannabis dinners for select companies and individuals in private locations, which is allowed.

“I have decided to work with people and businesses in the industry, because I trust them and they are familiar with it,” said Noiel, noting that demand for her dinners, described by some observers as “stoner soul food,” has been strong.

“The demand is more than I can supply,” she said. “I can’t cook CBD- or THC-infused foods for everybody. It would be fun, though.”