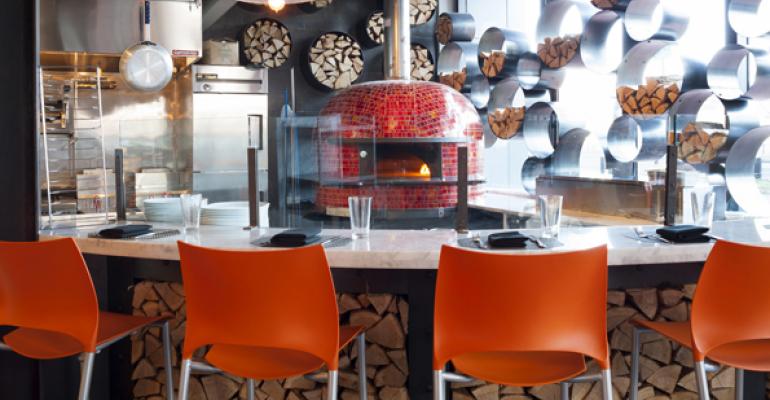 Eat Index tracks the hottest new openings around the country by spotlighting specific markets and the coolest new restaurants there.

GALLERY: Take a look inside Bluejacket & the Arsenal

Kyle Bailey has become the beer chef for Neighborhood Restaurant Group. After presiding over Birch & Barley, ChurchKey and GBD, all beer-friendly, if not -focused, establishments, the 2012 Restaurant Hospitality Rising Star now adds the massive Bluejacket & the Arsenal to his list of responsibilities.

He handles the menu—“think hearty, killer beer food,” the executive chef says—while NRG beer director Greg Engert, named One to Watch by RH in 2010, takes care of the beverages. It all comes together in a stunning 12,000-square foot facility that was once part of the Navy Yards ship and munitions manufacturing complex.

Bluejacket, the brewery, has the capacity to produce 5,000 barrels with 19 different fermentation vessels, including a coolship. A coolship, you ask? It’s an Old World-style vessel that allows for the making of superior sour ales, and only listed here as one example of how technical and intense these guys are about making their beer.

The Arsenal is the restaurant and bar, with approximately 200 seats. The two form what Neighborhood Restaurant Group describes as a modern-day beer hall—one that has been “insanely busy” since opening in October, Bailey says. And, when baseball starts in April, with Nationals Park blocks away, it’s going to be “bedlam,” he predicts.

His menu has been created to pair perfectly with the beer from Engert. It features updated beer-hall food made with seasonal ingredients, even heartier than at Birch & Barley. A prime example is the Rotisserie Half Chicken, brined for 12 hours and then served with pretzel stuffing and roasted root vegetables ($19), which matches up with The Expat, an elderberry biere de garde, Bluejacket’s contemporary take on the French classic. Its description—“malt-driven notes of toffee, almonds, dark bread and golden raisins spiked with elderberries and a hint of elderflower”—is enough to make you jump on a plane to Dulles.

“We’re not just making an IPA or red ale,” Bailey says. “We’ve got all these cool styles and bought a ton of great equipment so we have a lot of room to play.”

Bluejacket serves 25 different beers, all brewed on site, and nothing else. If you come looking for a Bud Light or even a popular craft brew, you’ll be out of luck. But what you can get is Bailey’s fine food, and a beer “made by real people with real products that tastes better than what you’re looking for,” he says.

We’ll drink to that.

The former longest running restaurant in Washington DC is back, and perhaps, better than ever. It’s been reimagined and reopened by Neighborhood Restaurant Group, one of The Coolest Multiconcept Operators in the Land, and executive chef Tony Chittum, One to Watch in 2014, as named by Restaurant Hospitality. The old classic was shuttered in 2010 after operating for 87 years, although the building’s history dates even further back to a Civil War cavalry officer. Chittum brings his Greek- and Italian-inspired menu to the restaurant, offering a nightly tasting menu in the more intimate 48-seat indoor dining room, while a less formal a la carte menu is available in the bar area and a 50-seat courtyard. Menu favorites are the house-made focaccia with grapes, kalamata olives and sage; warm imported halloumi; and guitar cut pasta, crushed plum tomatoes, garlic and torn basil. The tasting menu, four or six courses for $50 or $75, features a rotating menu of Chittum’s seasonally inspired offerings.

Nose-to-tail cooking, local sourcing, the merging of butcher shop/restaurant—Raynold Mendizabal has hit on all the trends with Urban Butcher in Silver Spring, MD. Not DC, you say? It’s just six miles from the White House and well worth the drive if you get the chance, and of course, aren’t vegetarian. Mendizabal, the chef/owner, offers his rustic urban food heavy on meat, with a specialization in cures, salumi and a nightly suckling pig at 7 p.m. for $26. The 124-seat restaurant features a comfortable, eclectic design with vintage and reclaimed furniture combined with more modern pieces and splashes of color. The moderately priced menu offers popular cuts of meat from heritage breeds, as well as other less popular cuts, all of which are available for purchase at the in-house butcher shop. Craft cocktails and beers and a value-oriented wine list are also on the menu.

Meaning “rise to ascent” in Italian, Rialto is also a popular district in Venice and the new upscale restaurant in Georgetown aims to transport diners back to the Old World. Chef Ryan Fichter serves up fresh-made pasta, imported specialty ingredients, fresh seafood and other Italian staples. The upscale menu aims to encourage sharing, through either family-style serving or small plates (piattini). Recommended dishes to share: spicy olives ($7), Seppia Alla Griglia (grilled cuttlefish with ink sauce, $9), Risotto Alla Milanese (featuring saffron, house-made sausage, asparagus and semi-cured tomatoes, $11/$18), and for dessert, the Zeppole, warm sugared doughnuts with raspberry jam, is hard to pass up. The downstairs portion of the restaurant is an exclusive area with an enforced dress code, where diners can opt for the $65 five-course tasting menu. Fichter says his menu “blends Old World Italian cuisine with contemporary ideals,” and the design of the historic building matches.

Chef Roberto Donna has had his share of controversy over the years with all sorts of legal and financial troubles. But a few years back, the James Beard Award winning chef teamed up with ace restaurateur Hakan Ilhan, which allowed Donna to do what he does best—cook. The result of their collaboration was Al Dente Ristorante, a modern, urban Italian restaurant, which opened in D.C. in April 2012. They followed with Roberto’s 4, a higher-end restaurant that reflects some of the menu glory of his much acclaimed and shuttered Galileo restaurant. Just before Christmas, the duo opened their latest restaurant, Alba Osteria, a sister restaurant of sorts to Al Dente. The latest offers authentic Italian cuisine reflective of the Piedmont region of Italy, Donna’s homeland. While the chef has created the menu for Alba, Amy Brandwein was tapped as chef de cuisine, overseeing the daily culinary operations.  The menu at the 226-seat Alba offers a selection of salumi and formaggi, antipasti, house-made pastas and Neapolitan pizza. The Washington Post praised the new restaurant, calling the tiny meatballs brightened with mint and draped with a sauce of red peppers, tomato and vinegar a crowd-pleaser. The poached marinated rabbit and tripe soup were also noted.

Named for the intersection near where chef Tim Ma and wife Joey Hernandez lived in New York City, Water & Wall is the follow-up to their tiny 28-seat restaurant, Maple Ave, in nearby Vienna, VA. Although Hernandez calls the second a little sister, it’s actually a little bigger. The focus, “creative food with a soul,” is the same, though. The bar has been set high for Ma and his creative American cuisine. He graduated from the French Culinary Institute in New York City and later worked at Momofuku Ko, before opening Maple Ave, which was Northern Virginia Magazine’s top-rated restaurant last year. The signature dish at Water & Wall is the Hudson Valley Duck Confit with caramelized Brussels sprouts, truffle aioli and cider gastrique ($24), but the Pan Seared Mediterranean Drum (winter squash puree, roasted beets, leeks and pickled cabbage, $24) or the Sweet Potato Risotto (toasted pecans and seasonal vegetables, $19) are just as tempting.

Doi Moi is the latest from tax lawyer-turned-restaurateur Mark Kuller, who’s already found great success with DC’s Proof and Estadio after a late career change. His third restaurant, also a partnership with chef Haidar Karoum, is this 129-seat Asian restaurant serving Asian street food. The menu is inspired by Karoum’s travels through Vietnam and Thailand and divided into sections, offering skewers, salads, soups, curries, noodles/rice, vegetables and shareable plates. Like the food, the space is bright, fresh and clean—“optimistic without a trace of nostalgia,” says Griz Dwight, principal of GrizForm Design Architects, who also partnered on Kuller’s first two. Downstairs from Doi Moi is a nearly hidden gem: 2 Birds 1 Stone, a cocktail bar, unmarked from the outside, from Kuller and noted mixologist Adam Bernbach, with a carefully crafted and continually changing menu of drinks.

Born from the original and century-old Joe’s Stone Crab in Miami, Joe’s Seafood, Prime Steak & Stone Crab has expanded the name and brand with locations in Chicago, Las Vegas and now the nation’s capital under the leadership of Lettuce Entertain You Enterprises. The DC location features prime steaks, seafood and many of the classics from the original in Miami. The signature bone-in rib eye (20 oz., $49.95), filet (16 oz., $52.95) and New York Strip (20 oz., $54.95) are hand-carved exclusively for Joe’s, while the famed stone crabs are harvested from the Gulf of Mexico one claw at a time, just as founder Joe Weiss and his wife Jennie did 90 years ago. A partnership with the Weiss family and Richard Melman’s company led to the expansion of the brand and the Chicago opening in 2000. Judging by the more than 1,200 people who attended the grand opening party for the DC location in late January, this one is off to a fine start.

We’ve heard farm to table a few times (too many), but never “roof-to-table,” which is exactly how chef John Mooney describes his new restaurant. With more than 70 aeroponic planters on the roof of Union Market, the recently redeveloped indoor food market where Bidwell is located, Mooney returns to DC to showcase the fruit and vegetables grown upstairs. The 120-seat restaurant is named for General John Bidwell, a general in the U.S. Army in the late 1800s and a presidential candidate known more for his California farming, and aptly so for a chef whose mantra has always been “responsibly sourced.” His menu will feature signature dishes with southern flair, like Crispy Deviled Eggs with Homemade Ranch Dressing; Herb Roasted Half Chicken; and Lobster Taco with Avocado Tomatillo Salsa. Mooney, who worked at Red Sage and Raku in DC years ago, will remain chef/partner at his Bell, Book & Candle restaurant in New York City, where his ultra seasonal menu also takes advantage of rooftop aeroponic gardening.