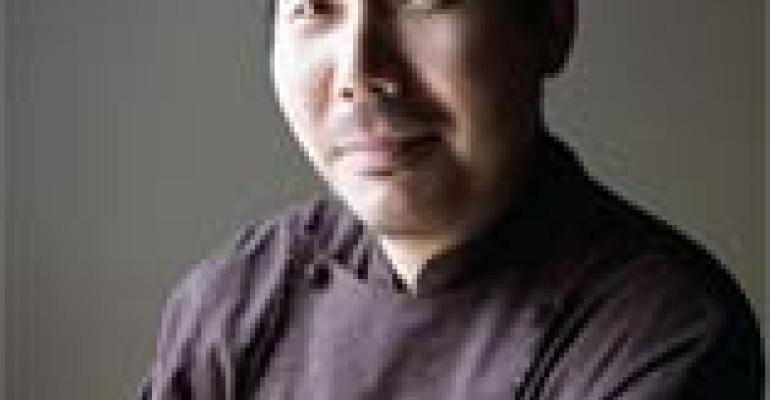 The lines have been out the door for Urban Belly, which raised the bar on Asian noodles and dumplings (e.g., lamb and brandy dumplings, pork belly ramen with clove-scented broth, rice cake noodles with chicken breast and mango in chili-spiked broth). Meanwhile, Belly Shack, which opened this past October, is a nod to Latin-Asian cuisine mirroring Kim's marriage (he's Korean; the missus is Puerto Rican). A Chicago Tribune critic called it “the raucous, tattooed, no-bull cousin” of Urban Belly. Think graffiti-covered walls, benches, cold somen noodle salad with olive-oil poached shrimp, orange supremes, jicama and tortilla chips or a Korean barbecue Kogi, with beef short rib and kimchi on pita, capped by bacon chocolate chip soft serve for dessert.

“The food makes you tilt your head and say, ‘Oh!’ That's a good thing,” the Tribune critic observed. Indeed.

What's watchworthy? After bouncing around quite a bit early in his career, Fahy he has gotten serious about pastry in the last few years. He recently took over one of the most-coveted jobs at a Chicago spot that is at the top of its game.

Fahy burst out of the gates three weeks after taking over Blackbird dessert duty with a whole new menu. A fan of seasonal desserts, one of his recent favorite concoctions was a cornbread pain perdu with candied pecans and maple sherbet, drizzled with aged Bliss maple syrup.

Fay, who spent two years at Chicago's Ritz-Carlton, returned to his hometown for the Blackbird spot following 13 months at Thomas Keller's French Laundry in Napa Valley. Out West, he managed to live car-free; as a result, he says, “I worked, read and practiced pastry. I slept and dreamt about pastry.” And the French Laundry experience? “It was boot camp for fine dining.”

After that, how could he not be ready for anything?

Pierre Gagnaire isn't a fresh face; his career spans more than three decades, and he has restaurants in Paris, London, Tokyo, Seoul, Dubai and Hong Kong. But Twist, just opened at the Mandarin Oriental, is his first U.S. venture. His menu infuses the simplicity of classic French cuisine with a modern spin. To fully appreciate his sometimes radical creations, he says, the diner must have “intelligence of the senses,” as well as curiosity and freedom of spirit. He's sure to make a splash in the 23rd floor, Adam Tihany-designed space.

Gagnaire may be best known for creating the molecular gastronomic dining experience known as “Note à Note” with the help of a chemist. It's the first dish made entirely of pure compounds. He separates the compounds, such as glucose and citric acid, and combines them with substances to alter their natural form and texture.

In a city overflowing with culinary star power, it will be interesting to see what Gagnaire cooks up.

Richards is a rare thing in Las Vegas: a female who heads up a bar program. But not just any program. She controls what's poured at 25 bars in the luxury Wynn and Encore resorts. Besides a well-developed palate and a passion for creating cocktails, Richards is also a smart manager. She understands how to concoct drinks that will take advantage of the available inventory.

Richards, formerly a cook and bartender herself, recently finished first in the Iron Bar Chef competition, beating out five other contenders from across the country.

What's watchworthy? Accarrino has a tough act to follow, taking over from a hot young chef, Nate Appleman, at one of San Francisco's hottest tickets, SPQR.

This CIA grad has paid his dues by working for a culinary who's-who, including Charlie Palmer, Todd English, Rick Moonen, Thomas Keller and Tom Colicchio. Now Matt Accarrino is looking forward to showing his stuff and taking full advantage of the Bay Area's well-rooted farm-to-table tradition at SPQR. It will be interesting to see what direction he chooses.

Accarrino's plan in the early stages was to transition from regional Roman cuisine to new Italian, creating seasonal fare with California inspiration. Within a month of taking over he had already rolled out his own menu. “Here more than anywhere else I've worked, I can follow where the products and inspiration take me,” he told eater.com. We'll be following, too.

What's watchworthy? Engert has raised the status of beer to an art.

Like many college students, Greg Engert didn't shy away from the occasional brewski, but in his case a favorite beverage turned into a career. He dropped out of graduate studies in English for a job waiting tables at Brickskeller, a venerable spot with a 1,200-bottle beer list. There, he soaked up beer wisdom and developed an educated palate; eventually, he wound up running the beer program for Neighborhood Restaurant Group, a 12-unit operator in the nation's capital.

Engert is passionate about beer, and it shows. At NRG's ChurchKey, he's scoured the globe to develop a program offering 555 varieties encompassing 30 countries, 100 styles and 40 draft options. Engert is such a stickler for correct technique that the restaurant has five temperature zones to accommodate the various beers' optimal serving and storage temperatures.

He also has worked with NRG chefs to develop food and beer pairings and educate curious diners about the relationship between beer and food. And he continues to broaden his knowledge base: Engert recently traveled to a craft brewery in California to help brew a one-of-a-kind ale to serve back home.

Xie Xie (Mandarin for “thank you”), which debuted in New York last summer, features a short menu big on taste and inventiveness in a space age setting. Sosa, with a short stint at Yumcha and a couple of years working for Jean-Georges Vongerichten under his belt, says the pan-Asian menu was inspired by impressions made during a year spent cooking in Asia. It includes five sandwiches, five salads and a couple of desserts.

Business has been brisk, and Sosa has plans to unveil a second location early this year.

What's watchworthy? The genes, of course. But this skillful chef is not resting on his genetic good fortune.

Shunning his father's advice to “get a real job,” Vongerichten the younger first picked up a paring knife at age 9. This year, the talent of this 27-year-old will get a real test: Dad Jean-Georges named him executive chef at Perry St, the West Village neighborhood eatery that recently fetched a Michelin star (joining its New York Times three-star rating). No pressure here.

For those who assume he landed the gig simply through family ties, keep in mind that the young Vongerichten toiled as sous chef at Jean Georges for three years, and paid his dues at Vong in Paris and Hong Kong, and Spice Market in Paris. Before that, he finished an externship at Spain's legendary El Bulli. He has insisted that he get the same treatment as any other chef within his father's organization.

In some ways, the younger Vongerichten is a chip off the old block: Both favor a simple, straightforward cooking style, and he says “my father and I are both persnickety. We don't like noise in the kitchen, and a few grains of salt on a tablecloth make us shiver.” Cedric admits one point of departure: Dad is “a big spring guy,” while the son prefers fall flavors — and butter. But he's promised not to jettison the menu — especially, devotees will be happy to hear, the fried chicken.

What's watchworthy? He's only 28, but he's already studied under some of the best in the business. He's got big shoes to fill at one of Portland's most beloved restaurants.

Lightner, fresh from an extensive immersion in Spanish cuisine and culture — touring Andalucian olive presses, Iberian pig farms and Basque cheese caves; working at Mugaritz for 18 months; and learning at the feet of Ferran Adria and other masters — took the helm at Castagna a few months ago with the express understanding that he would continue to follow the locavore philosophy. His plan is to up the ante a little, taking all that Pacific Northwest bounty and making it even more interesting with the tecnhniques he's picked up working in Europe and the U.S. West Coast.

“Working at one of the best restaurants in the world has elevated my connection to food and (taught me) how to celebrate one single ingredient to allow for its true flavor to emerge,” he added.

What's watchworthy? Without them, there might not be a Kogi Taco Truck.

Little more than a year ago, you would probably scoff at the idea that two guys selling Korean tacos prepared inside a roving truck would launch one of the hottest food trends of the year. But Kogi, thanks to a company called RoadStoves, changed all that.

Hiller (the tall guy, below) and Appel (in the shorts, next to dad Herman) helped Kogi Korean BBQ founder Mark Manguera get moving by renting him a truck to could bring his food to the tweeting masses. Kogi caught on quickly not just for its taste, but for the vehicles and the use of social media to promote their locations. The trucks and the promotions created a buzz and a receptive audience almost from Day 1.

Since Kogi, RoadStoves has put other truck/kitchens on the road in L.A.: Dosa Truck, 5 Marked, Baby's Badass Burgers, Barbie's Q and Nom Nom. Hiller, who is an attorney, ensures that the trucks don't park too close to restaurants; Appel's family provides the catering and food truck street smarts. Together, the pair has forged all-important relationships with owners of buildings in the area. The company's website sums up the services: “Vehicles, permits, insurance, licenses… RoadStoves has you covered so you can get cooking.”

Last we heard, Kogi's Manguera and Appel were exploring a way to take the mobile food craze to the next level. Stay tuned.