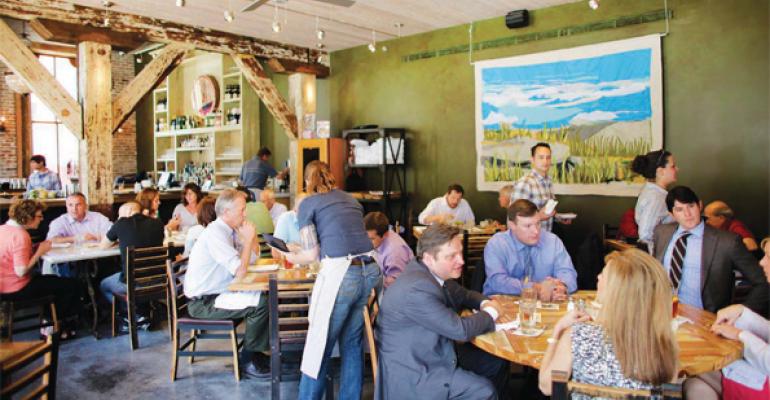 It's hard to believe that while Donald Link was racking up national honors for his New Orleans-based culinary empire—French-inspired bistro and white tablecloth flagship Herbsaint; Southern- and Cajun-driven standout Cochon; pork-centric charcuterie spot Butcher—he was hatching a plan to create a much-different type of restaurant. Now, following a globe-trotting research trip during which the chef and his Link Restaurant Group partners sought wisdom from the grill masters of Uruguay and Spain’s Basque country, he’s made that dream come true. Link opened wood-fired seafood concept Pêche this spring on the corner of Julia and Magazine streets in New Orleans’ Warehouse District, close by his other operations.

The food at Pêche is a departure for the Beard Award-winning Link (Best Chef-South, 2007; Best American Cookbook, 2009; finalist for Outstanding Chef in 2012). He’s renowned as a master of all things Cajun and pork, yet Pêche shuns pork and its fish preparation style is anything but Cajun. What was the idea here?

Here’s how Link described his plan for Pêche just prior to its opening for website www.AndrewZimmern.com:

“I want to bring the sensibilities of the other restaurants into a New Orleans seafood restaurant. Having a traditional oyster bar, but also serving crudos and ceviche at the raw bar,” he said. “The main feature here will be the South American and Spanish-style fire hearth and grill. The fish and other meats will be cooked over coals made from burning oak and pecan logs. You can look for a lot of fun small plates, a great raw bar section and a lot of fresh local seafood. You won’t find much fried stuff (but maybe a little bit).”

The 4,800 sq. ft. restaurant is housed in a building that began its life in 1840 as a funeral home. Restoration challenges galore were overcome by Trapolin-Peer Architects and Landis Construction Company, resulting in a building that meets contemporary codes yet strongly evokes the look and feel of old New Orleans. Its centerpiece: an oversized steel wood-burning grill custom-fabricated by Donald Link’s cousin, Dwayne Link.

The Pêche menu was a group effort from Link, Cochon chef/partner Stephen Stryjewski (he was the Beard Best Chef-South honoree in 2011) and Pêche chef/partner Ryan Prewitt.

Guests at the restored space can begin their meal by sampling offerings from the marble-topped raw bar or pick something from a snack lineup that includes shrimp toast ($7), smoked tuna dip ($7), fried bread with sea salt ($6), hushpuppies $6) and crab and artichoke fritters ($9).

Pêche’s small plate lineup offers items such as crab and eggplant gratin ($12); Royal Red shrimp/garlic butter ($12); catfish with pickled greens and chili broth ($10); spicy ground shrimp and noodles ($12); and capellini with crab and chilies ($14). There are two soup choices each day—shrimp bisque or seafood gumbo, both $8—but just one salad option: spring greens and feta with lemon vinaigrette ($7).

Big spenders can order a 22 oz. ribeye for the table ($60) or a whole grilled fish sold at market price. What you won’t find here are the classic warhorses of Creole and Cajun cuisine: crawfish etouffe, shrimp creole, blackened redfish and the like. Traditional seafood dishes are out at Pêche; contemporary treatments are in.

Most of the restaurant’s dishes feature ingredients sourced from an extensive network of farmers and other local food purveyors that has been developed by Ashley Locklear, forager for the Link Restaurant Group. LRG also holds a wholesale license that enables Pêche to buy fish directly from fishermen. “That’s going to give us access to fish that you don’t normally see,” Link tells the New Orleans Times-Picayune. “Things like mackerel. A lot of fishermen throw that away, but, if you have a relationship with them, they’ll keep it for us.”

There are plenty of keepers on this restaurant’s beverage list. It offers five specialty cocktails like The Leviathan (Chartreuse, Citadelle gin, lime juice, $9); nine types of rum (Rhum Clement VSOP, Martinique, $10); seven white wines and five reds sold by the glass); four beers on tap, priced at $5 a pint, $15 per pitcher; five types of cider: and six ginger ales (Vernor’s, $4). The bar offerings are just as contemporary and focused as the restaurant’s food.

With Pêche, the always-innovative Link has once again found a way to expand his portfolio of restaurants without following a trail already blazed by others. This time, he’s given New Orleans diners a smart new way to savor the area’s abundant local seafood. Let’s hope he dreams up something just as interesting for his next project.