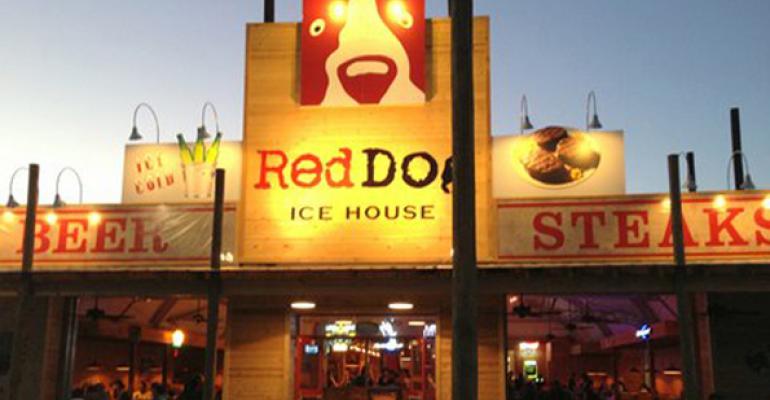 Lonnie Schiller&rsquo;s search for a new concept with little competition took him all the way to Carrizo Springs, TX, and the launch of Red Dog Ice House, smack dab in the middle of the Eagle Ford Shale. &bull; See more New Restaurant Concepts

After 25 years of success with mostly upscale restaurants, Lonnie Schiller was looking for something outside the “shark tank” of an ultra-competitive restaurant market like Houston.

His search took him far off the beaten path, more than 300 miles away from Houston, all the way to Carrizo Springs, TX, and a new meat-and-potatoes concept called Red Dog Ice House.

The c.e.o. of Schiller Del Grande Restaurant Group was a year removed from the closing of Ava, a fine-dining restaurant in Houston, when a small investment in an oil and gas company led him to the Eagle Ford Shale in Southwest Texas. His stake was “very small, but enough to get an interest in this hydraulic fracking,” he says. It took him through Carrizo Springs and other almost forgotten towns between San Antonio and Nuevo Laredo, Mexico.

“It was like the movie Road Warriors,” Schiller says of the scene there. “Giant 18 wheelers storming up and down dusty roads, delivering men and equipment and oil and gas and anything else they’d need.”

Towns like Carrizo Springs, with a population just north of 5,000, are now bursting at the seams. The fracking began in 2008, slowly at first, and now as many as 10,000 workers flood the small town Monday through Friday. They are welders building pipes for $15,000 a month, firewatchers nearby holding extinguishers (just in case) for $30 an hour, supervisors and crew chiefs making even more and then all the others involved in building and maintaining the infrastructure necessary to handle all those people.

Beyond lodging, from housing to hotels, they needed to eat, too. The Church’s Chicken, Pizza Hut and local steak joint weren’t cutting it.

Red Dog Ice House isn’t part of Schiller Del Grande, the company Schiller partners with acclaimed chef Robert Del Grande and others to run. They were busy with RDG Bar Annie, the new iteration of the restaurant that put them on the map in Houston, Café Annie, and other successful concepts ranging from casual to upscale. “Frankly,” he says, “I didn’t want to drag them into this and have it be a giant mistake.”

Most of Schiller’s previous projects had been upscale, but he knew this one couldn’t be. “It had to be good basic roadhouse food,” he says. “Steak, burgers and cold beer.”

His other challenge was typical of any new business popping up in or around a shale region like this. No one really knows how long the boom will last, especially in oil country like Texas where people still haven’t forgotten how fast wells and then towns can dry up. Financing can be difficult, if not impossible.

Schiller hatched the idea of creating a portable restaurant, so if the wells ran dry, he could pick up the restaurant and most of the capital invested and move them someplace else. He found willing partners with the expertise he needed—attorney John Pecore, developer and construction expert Rob Axelson and restaurant architect Craig Schuster.

Their new company is called Portable Ventures and the first Red Dog Ice House opened in March. The 4,000-square-foot restaurant has 120 seats and a large bar, all enclosed around a 1,200-square-foot kitchen built and brought from Houston and under an almost 3,000-square foot tent originally made for military use. It’s as sturdy as a permanent structure, Schiller says, and customers don’t even realize it’s just sitting on top of a slab of concrete.

“We sell 500 beers a day and some food to wash it down,” says Schiller of the concept, half in jest, because he quickly adds the food is good. The menu features what you’d expect: wings, fried pickles, burgers, baked potatoes, steak and the like. The biggest sellers—almost 10,000 longnecks a month—are Bud Light, Coors Light and Dos Equis.

David Swartz, the g.m. who opened it and now the fifth partner, says they dabbled with craft beer, but quickly learned the old standbys were all they needed.

The customers sometimes come wearing their red work jumpsuits and other uniforms, or sometimes they get cleaned up into jeans and a T-shirt. They may look like roughnecks, Swartz says, but he’s had no problems to date.

“It’s an upscale blue-collar crowd,” he says. “They don’t want the fine-dining; they’re a meat-and-potatoes crowd and they’ll pay for it if it’s good.” The 24-ounce Cowboy Ribeye ($34) and the 12-ounce New York Strip ($27.95) are evidence of that. The Shrimp Diablo ($8.50, jumbo shrimp stuffed with a jalapeno and wrapped in bacon) is the most popular appetizer, with 130 orders coming on a good night, while the classic Chicken Fried Steak ($12.50) is the most popular entrée.

Swartz says there are other restaurants in town, but very little competition for Red Dog. “A lot of places don’t have any customer service because there was nowhere else to go before,” he says. “We’ve raised the bar.”

Schiller has found the niche he was looking for, in a market where he’s the biggest fish. Business has been great, but counter to most restaurants, the weekdays are the busiest. Swartz, who had run his own restaurants in rural areas outside Houston, staffs down on weekends from 21 employees to nine when most of the town disappears.

Schiller says the restaurant serves between 350 and 400 customers on a good day, with the check average around $20. He projects revenue to reach approximately $2 million for a full year, well beyond his expectations.

The biggest challenge for Swartz, beyond moving five hours from his wife and three children in Houston, has been finding and retaining good employees. He got plenty of applications, but try filling a $10-an-hour kitchen job with someone who could make $30 an hour holding a fire extinguisher next to a welder. So he pays cooks $13.50 an hour, several dollars more than he’d pay in Houston, and says he finally has a strong staff now made up of mostly full-time Carrizo Springs residents.

Goods and supplies are also more expensive, because local stores don’t have any nearby competition and the majority of people in town are making enough money to look past most price tags. Distributors charge more for food and liquor, too. Beer costs 11 cents more per bottle than in Houston, Swartz says.

“It’s amazing the amount of money being thrown around,” he says. “Everybody is riding the train as far as it will go.”

The Eagle Ford Shale is unlike other similar formations, in that it offers both oil and natural gas resources. It’s spread over 20 Texas counties and a U.S. Geological Survey estimated there are 10 billion barrels of recoverable oil in it. A University of Texas San Antonio study last year estimated its economic impact to the area was $61 billion. Experts believe fracking could continue there for another 10 or even 20 years.

Back in Houston, where Schiller still spends his time working his real job as c.e.o. of Schiller Del Grande, another kitchen is being constructed for the next Red Dog Ice House. Swartz, now a partner and regional manager, will open this one in the fall in small-town Kenedy, almost halfway between Carrizo Springs and Houston.

Schiller expects to open two more Red Dogs next year, and thinks long-term there could be room for a few more somewhere in the Eagle Ford Shale. Plus there’s the recently discovered Cline Shale in West Texas, which appears to be even bigger than Eagle Ford.

If any of the existing locations don’t work out, Portable Ventures could also relocate a restaurant, bringing just about everything, including the kitchen sink.

The coolest multiconcept companies in the land
Aug 06, 2013