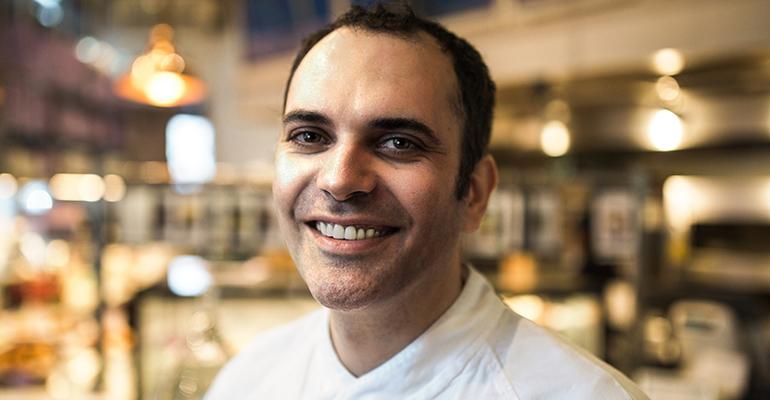 The Cronut creator will expand with his first full-service restaurant

Dominique Ansel is known for creating the Cronut and many other whimsical flights of pastry fancy. Now, the chef is preparing to show the world that he can do much more.

This fall, Ansel will branch out with his first full-service restaurant, in Los Angeles.

"We're still working on developing the menu at the moment, but I can say that the restaurant will be an all-day dining concept with a savory menu, cocktails, and I'm really excited for a full-on brunch service as well,” Ansel said. The concept is not yet named and the exact location has yet to be revealed. But Ansel said it will be his biggest location in the world, and a West Coast flagship.

Included as a component of the restaurant will be one of his eponymous bakeries. Ansel operates two bakeries in New York, one in London and two in Tokyo, where a second location opened in March.

The bakeries are known for specialties like Ansel’s spin on the buttery and sweet kouign amann pastry, as well as inventive treats like the Cookie Shot, a shot-glass-shaped cookie filled with cold vanilla milk; and Frozen S’mores, a square of custard ice cream coated with chocolate-wafer chips and enrobed in marshmallow, which is torched to order. Ansel promises to bring the same creative spirit to the new LA restaurant.

“As we do with our shops in London and Tokyo, it’s not about simply cutting and pasting, or focusing on one product — it’s creating something truly unique that speaks to the place,” Ansel said. “So we’ll be dedicating a large portion of the menu to items made exclusively for LA that aren’t available anywhere else. I’m looking forward to creating something really special that I haven’t done before.”

And, of course, there will be Cronuts.

Ansel launched the croissant-donut hybrid in 2013, and it quickly became a viral sensation, prompting long lines at the New York bakery. That year, in Los Angeles, more than 750 people showed up — in the rain — for a one-day pop-up to get a taste of the Cronut, which is often credited with sparking the larger trend of menu mashups. But Ansel refused offers to launch Cronut shops all over the world. Instead, he moved forward with expanding his bakery, and now opening the full-service concept.

For Ansel, the Cronut is just another creation, albeit one that took three months of testing to get the recipe just right.

“We have a saying on our team: ‘Don’t let the creation kill the creativity,’ meaning don’t let one creation stop you from continuing to move forward and create something new,” he said. “In this industry, it’s important for chefs to be original and create their own original ideas.” Before he opened his first bakery in New York, in 2011, Ansel was the executive pastry chef for the restaurant Daniel for six years, at a time when the restaurant had earned a third Michelin star and a four-star review from The New York Times.

Ansel was born and raised in France. Before he came to New York, he spent eight years working for the celebrated Fauchon bakery in Paris, which is famous for its macarons and pastries.

He has been described by some as the Antonin Carême of our time, referring to one of the founders of French gastronomy in the Napoleonic era. Carême was known for crafting elaborately sculpted confections, and also moved from pastry to become known more broadly as a chef. But unlike Carême, Ansel has more modern and eclectic inspirations.

“I’m curious, and I find inspiration everywhere, from traveling, to things I see on Instagram, like fashion or nail art or architecture,” he said. “I like to learn about different cultures, not just by food culture, but also from just walking around the city, visiting museums, learning about local traditions, wherever I may be.” “Food that evokes memories and tells a story,” he said. “Desserts are some of the most memorable meals in life. You remember baking those cookies at home with your mom or grandma. You remember your birthday cake and what your wedding cake tasted like.

“At the end of the day, pastries and desserts make people happy, and when I see my customers enjoying our creations, that’s what makes me get up every day to keep doing what we do.”

All photos are credited to Thomas Schauer