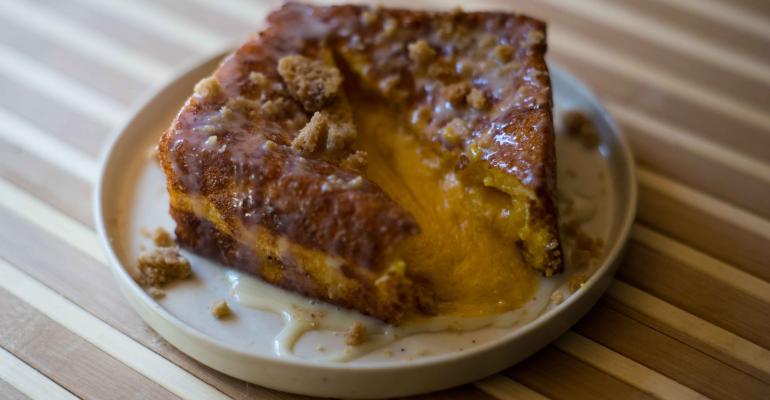 Rubato, a modern spin on the type of Hong Kong cafe known as a cha chaan teng, will replace the Cantonese bakery Contempo, a longstanding neighborhood institution in Quincy, Mass., later this summer.

The 1,000-square-foot, nine-seat cafe will focus on quick service and takeout. Guests can dine in at the counter.

Headlining the more “remixed” side of the menu, as Louie puts it, are a slate of sandwiches on bolo bao buns — a cha chaan teng staple that translates to “pineapple bao,” so called not because pineapple is an ingredient but because of the bread crust’s resemblance to the fruit. The signature bolo bao sandwich comes with fried chicken and sesame slaw. Louie has also dedicated sections of the menu to his own takes on spam and eggs and on Hong Kong-style French toast.

As for more straightforwardly prepared traditional dishes, Rubato will offer youtiao, a type of fried dough stick that was one of Contempo’s most popular items, milk tea, preserved egg and pork congee and butter bolo, which consists of a slab of butter between a bao bun.

“What I really want to do is bring my experience as a chef and [ask], ‘How do we execute these things to be the best they can possibly be without making it too fussy, honoring the culinary tradition of the Hong Kong cafes and those flavor profiles while also, I think, trying to elevate it as much as we can?’” Louie said.

Louie has worked as a chef for the past eight years, including serving as the head chef of Oklava in London. He and Ratsifa had been planning to open their first restaurant in London, but the pandemic scuttled their plans. Around the same time, Chan called Louie to let him know she wanted to retire and asked if he would take over operations of Contempo.

Louie and Ratsifa considered several directions to take the bakery in — among them, leaving it just as it was or converting it into a fancy Chinese restaurant — and ultimately landed on the idea of a Hong Kong cafe as a way of maintaining continuity and creating something new at the same time.

“The core of it was, what kind of restaurant would I want down the street from me? Where would I want to eat every day?” Louie said. “And this is kind of playing on that — the nostalgia of what we grew up eating — and not just the specific items, but also the flavor profiles and accessibility to this food.”

Chan, drawing on her decades of experience running Contempo, has been a great help during the early stages of Rubato’s development, Louie said. Not only has she given advice on technical problems — licensing, finding plumbers and electricians, etc. — but she’s also worked to connect Louie with Quincy’s working-class Chinese community.

“I really enjoyed [setting up the business], to be honest,” Louie said. “Obviously, it's a lot, and it gets stressful at times, but I really enjoy this part of it. I think it's kind of exciting to be able to build something from the ground up, or to build off of what my mom had. And I think I've been lucky enough to have really good people to guide me — really good folks that have been in this position before that can give me advice and that I feel comfortable asking.”

Chan opened Contempo 22 years ago, naming the bakery after the Chinese rock cover band she played in. At the time, she was also working as a Boston public school teacher. She worked both jobs for over a decade, while continuing to play in her band, as the bakery grew into a well-known mainstay that people would travel from out of state to order from, according to Louie.

“After school, before the students even left, she would run and have to go buy strawberries, [for instance], because they’re running out of strawberries, to bring to the bakery to fulfill an order by four o’clock, or something like that,” Louie said.

The name Rubato — a musical term denoting a change in tempo — is a wry marker both of Louie’s indebtedness to his mother’s hard work and his own creative expression.

By drawing on his memories of Hong Kong and applying his own culinary expertise, Louie finds his individual expression.

Cha chaan tengs grew in popularity in Hong Kong in the 1950s, during the post-World War II population boom. The British occupation of the city had brought along a demand for Western food, but most residents couldn’t afford it. The cha chaan tengs, reputed first and foremost for their quick-service and inexpensive offerings, developed a hybrid cuisine of Western and Chinese dishes that caught on with Hong Kong’s burgeoning working class.

Decades later, they made a profound impression on Louie. His goal for Rubato is to recapture and elevate his memories of that unique corner of the culinary world.

“What I really want is people to walk in and, regardless of the price point, I just want people to walk out and be like, ‘Oh wow, that's the best whatever I've ever had,’” Louie said. “Whether it's bolo bao or steamed bao, I just want someone to [think], ‘I might have paid a little bit more than I might be used to, but also this was just undeniably the best thing I've eaten.’”