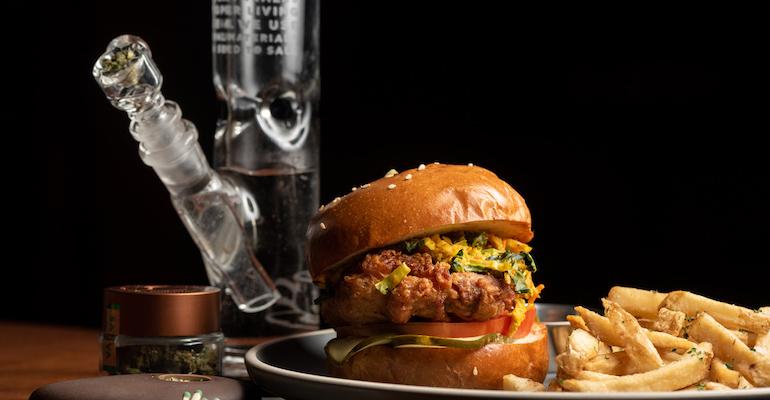 What was Lowell Café — the first restaurant in the U.S. where open cannabis consumption is allowed — has changed its name, the restaurant announced Monday.

Lowell Cafe is now the Original Cannabis Café, perhaps known more casually as Cannabis Café — which, officials said, is what everyone had organically begun calling the restaurant. The website is now cannabis.cafe and on Instagram it will go by @OGCannabisCafe.

Andrea Drummer, the restaurant’s executive chef and partner, said the concept is “evolving” away from being associated with a corporate entity, referring to the Lowell Herb Co., a cannabis company that was among partners holding shares in the concept when it opened Oct. 1.

Lowell products are still on the cannabjs menu at the dispensary, which is operated as a separate entity alongside the restaurant, but so are cannabis products from 45 different growers.

“This important social and historical establishment should belong to the cannabis community and industry, not any single cannabis corporation,” said Drummer in a statement. “By no longer being branded with a single company, our Cannabis Café will focus on its goal of presenting our diners with as diverse a range as possible of cannabis from small independent growers and entrepreneurs.”

In addition to Drummer, owners of the restaurant include social activist Renee Nahum, as well as the cannabis companies 710 Labs and Famous Farms, among others.

Officials say tens of thousands of neighbors, cannabis enthusiasts and canna-curious have dined and smoked (or ingested cannabis in other ways) at Cannabis Café since opening day. It is the first in a group of open-consumption cannabis concepts coming to the incorporated city of West Hollywood in Los Angeles, which hopes to become an Amsterdam-like destination for cannabis users.

Meanwhile, open consumption of cannabis in restaurants is expected to grow outside California.

This year lawmakers in Colorado, the first state to legalize recreational cannabis, passed House Bill 1230, which in 2020 will allow for restaurants to apply for “marijuana hospitality” licenses.

Last week, however, the Food and Drug Administration revised its position on cannabidiol, or CBD, saying it is not considered “generally recognized as safe,” or GRAS, for use in human or animal food, meaning it is illegal to add to restaurant food or cocktails.