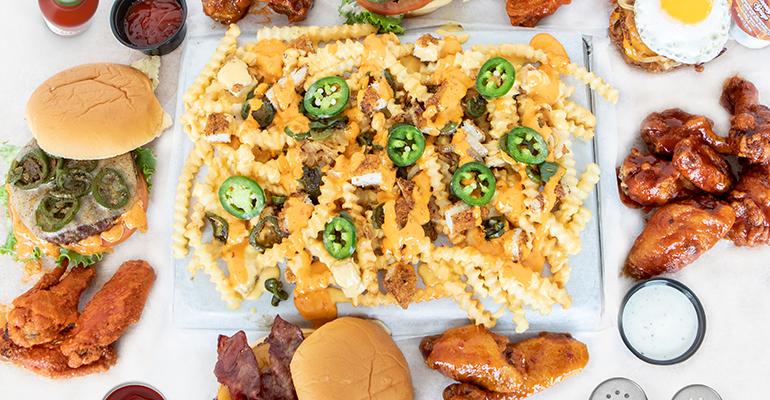 Abdul Popal, founder of Halal concept iniBurger, discusses how he's been developing the menu at his two restaurants alongside customers.
Trends>New Restaurant Concepts

The birth of a Nashville Hot Chicken ice cream sandwich: How one restaurant is crowd-sourcing new menu items from its local community

Open less than a year, iniBurger has an engaged customer base that has been responsible for several hacks that have made it onto the permanent menu

The fast-casual concept iniBurger launched in July 2020 — mid-pandemic — in San Francisco, where on-premise dining was prohibited, but founder Abdul Popal thought his Halal concept would be a standout in the market.

Serving a niche in the community, iniBurger is now has two California locations that are 100% Halal, meaning the menu is certified to meet Islamic dietary standards. The restaurants have seen month-over-month increases in sales, while other concepts have closed.

The two locations of iniBurger are converted units of Burgerim, a now-defunct slider concept of which Popal was a franchisee.

Popal spoke with Restaurant Hospitality about how the brand has garnered such a large community involvement and how they’re crowdsourcing new menu items like the Nashville Hot chicken sandwich topped with a scoop of ice cream:

Q: We recently wrote about your newest chicken sandwich in a weekly edition of New on the Menu that features an ice cream scoop. Can you talk about the inspiration behind that?

We naturally thought ‘okay what's hot, what are people wanting, what's in demand?’ And so, Nashville Hot Chicken is a runaway [choice]. You have big organizations like Popeyes and KFC and those guys competing and little upstarts that are kind of on the scene doing really good in terms of sales. We started to seek out and figure out how can we create chicken … that will resonate with our fan base and what we're trying to achieve, while, at the same time, not be 100% a chicken house.

That was one thing and then the other challenge that we're facing is from what we learned typically goes into the Nashville Hot sauce that these chickens get tossed in. [Nashville hot sauce] typically has elements of lard in there, and because we're 100% Halal, we cannot use the lard. We had to come up with alternative ways of creating the sauce so it actually tasted good. What we ended up with is a chicken that I would describe as mild hot, so we don't have the very low heat range and we don't have the very high heat range, we just have one that's kind of in the middle for somebody that doesn't eat spicy food regularly that needs to be blended out with some kind of sweet, savory kind of sauce. We put on coleslaw, which gives it a very nice unique blend, which is the way that it's been described to me by customers, and I tend to agree.

As you're biting into this natural hot chicken, and you're cutting through the different layers all the way down to the bottom, you're experiencing tastes that are layer-by-layer difference, all the way down. And it makes it a really pleasing sandwich. We’ve had great success on the Nashville hot chicken [and it] became one of the hottest selling items on the menu.

Then we had some locals come in and start doing some hacks where somebody decided to put ice cream in [the sandwich] and we initially thought, ‘Oh who would do that?’ We tried it and said, ‘Oh wait, yeah, this is the sweet savory taste that’s sitting on top [of the spicy chicken] instead of the coleslaw and it works.’ So that's where that idea was born. Today we don't have depth in terms of the heat range, because we don't have all those varying degrees of heat like other chicken houses do, but now we have breadth in terms of different things that you can actually put inside of the sandwich.

Q: The customer interaction, especially after less than a year of operations, is really incredible. What are some other menu hacks customers have come up with that have made the menu?

My taste profile might be different than somebody else's, so typically when we come up with a menu item, we try it internally, we have the employees try it, and then we immediately start to have customers try it.

And so, some of the things that they've done is replace the coleslaw [on the Nashville hot chicken sandwich], with these delicious mac-and-cheese bites. So basically, it's mac and cheese wrapped up in breading that’s been fried … they've put that inside of the Nashville, and then, instead of the sweet sauce on top, they've added ranch dressing.

[Customers are] beginning to push the envelope in ways that we hadn't imagined, it's almost become a secret menu of sorts. Every time we try one of these hacks that they come up with, we think ‘Oh that's interesting and it's good.’ So, while we haven't officially displayed it on the menu, it’s items that the underground has figured out and are seeking out.

Q: So other than these new iterations of your Nashville hot chicken sandwich, what else have customers come up with?

The Hawaiian spice burger that we launched [is one of those menu items]. People think they can put a pineapple on a slab of protein, and it tastes good. The sweetness of the pineapple actually blends in or tempers down the heat of the jalapenos that goes on [the burger]. The Angus beef, cheddar cheese, and pineapple with jalapenos was a result of somebody trying early on, a pineapple slice on a burger and said, ‘Oh man this is fantastic.’ Then, when we tried it and we gave it some other customers, they said it's great, and said, ‘Okay, well, this needs to be something that we put on the menu.’ So, it’s there permanently.

Somebody else who was a mushroom lover put mushrooms on a burger and said, ‘Look, you guys are missing this mushroom Swiss [combo].’ So, we went down the path of like, okay, we don't want to just have a plain mushrooms Swiss, we want to have a special mushroom Swiss and now we're working on this new menu edition that we will offer an LTO. That’s going to be an out-of-this-world mushroom Swiss burger with a balsamic honey glaze that's going to go on it.

The other thing that I would note is that you have these creative people that can come up with these burger ideas, but generally speaking 90% of the world does not know how to come up with things right, they just want to follow things that have been pre-created for them. So, for us, I almost see the 10% coming up with the menu items, curating products that then benefit the 90% who would otherwise not think of asking us to put something together like that.

Q: How are you hearing about customer hacks at your level?

The core tenant of what we do is to be very community engaged and we hope that you know what we're doing. We have an obligation to take care of the communities we’re in. We have fundraising and we've donated a substantial amount of money to orphanages, local food banks, Rise Against Hunger, you name it, to support the communities in which we're in. By having that really intimate touch with the community we have this regular, ongoing dialogue on pages on our social media as well as the groups that we belong to places like Facebook, where they bring up the ideas and they post the photos of the of the food tags that they've created.

Q: Was any of this in the plans when you started iniBurger in July?

It happened along the way, but we could not have planned this community engagement any better. I feel like it happened on accident. It feels really good that people are actually involved and are coming in, creating videos without us knowing or asking. It just feels really good that the consumer feels like they have that kind of a brand affinity to come in and do those things.

Q: That's something a lot of brands pay good money for.

Exactly, and it has benefited by way of increase in sales. So, our Fremont store has seen almost double in sales growth and our Pleasanton store has seen 30% to 40% increase sales since we introduced the menu, and that's during COVID. We're beginning to hit numbers that are surpassing the best numbers that we've ever had.