New on the Menu: Matzoh brittle and a hot chicken ice cream sandwich 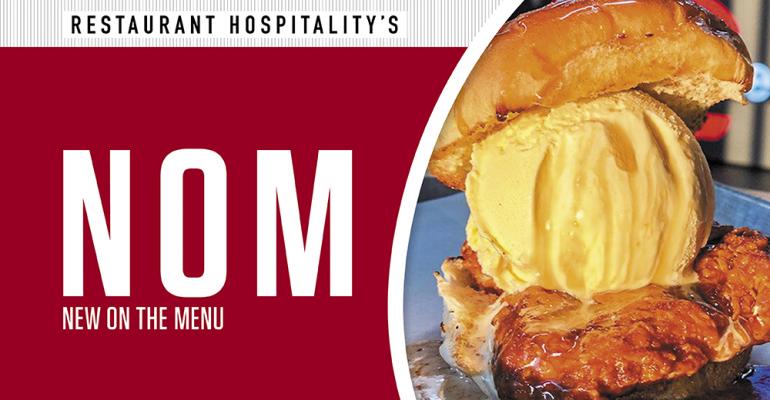 Matzoh, the usually unflavored cracker that is required eating for observant Jews during the 8-day holiday of Passover, is sometimes called “the bread of affliction,” and its crumbly dryness is a reminder of the hardships of the Hebrews’ flight to freedom from slavery in Egypt when, with no time to allow for their bread to rise, it baked on their backs as they fled in the hot desert sun. But it doesn’t have to be bad, as chef Mica Talmor of Pomella in Oakland, Calif., demonstrates by coating hers in caramel and chocolate.

Washington D.C.’s cherry blossom festival is in full swing and bartender Thomas Martinez of The Bombay Club is celebrating with a pink, floral version of the Gimlet.

In San Antonio, chef Steve McHugh of Cured restaurant is enhancing the classic BLT by adding fried oysters to it, and in Brooklyn, N.Y.,, Greg Baxtrom brings Japanese elements of soy sauce, ginger and shiitake mushrooms to his wagyu burger at Maison Yaki.

And finally, iniBurger, which has two locations in the San Francisco Bay area, has been adding large scoops of vanilla ice cream to its Nashville hot chicken sandwiches for a while now, possibly as a dare or a joke, and offering it as a secret menu item. It has been such a hit that it has earned a permanent place on the menu, priced the same as its regular Nashville hot chicken sandwich, although that sandwich has coleslaw and the version with ice cream doesn’t.