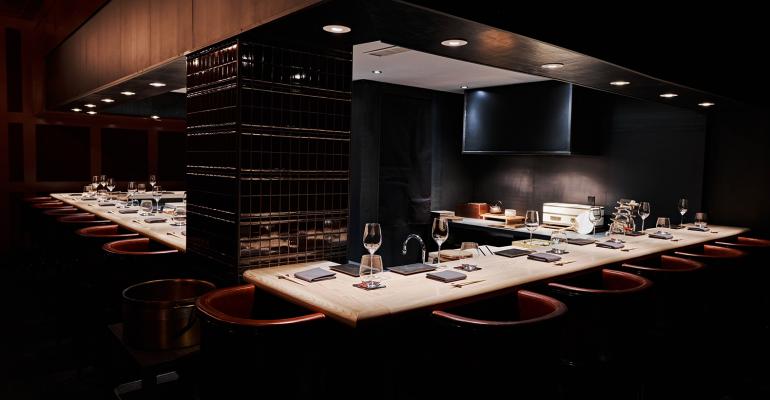 The restaurant has 15 seats and serves 30 total guests per night, with four seatings staggered across the evening. Dinner includes 15 to 16 courses, plus optional supplements, and costs $205 per person.
Trends>New Restaurant Concepts

Federico “Fred” Castellucci first experienced high-end omakase in Tokyo, falling hard for the meticulously prepared dishes and intimate style of dining. But it was in New York, after meeting chef Jordan Trent Harris at omakase spot Shuko that he began to formulate a plan to bring a similar concept to Atlanta.

“What Jordan was doing at Shuko was on par with what I’d experienced in Tokyo, but with a level of hospitality that I hadn’t seen before in that setting,” said Castellucci, the president and CEO of Castellucci Hospitality Group. “We hit it off and became friends, and I invited him to Atlanta.”

The duo planned a small omakase pop-up in April 2020, but like many best-laid plans during this period, theirs was thwarted by the pandemic. Rather than scrap the idea entirely, they transitioned into a takeout concept, offering diners a multi-course meal in elaborate packaging. 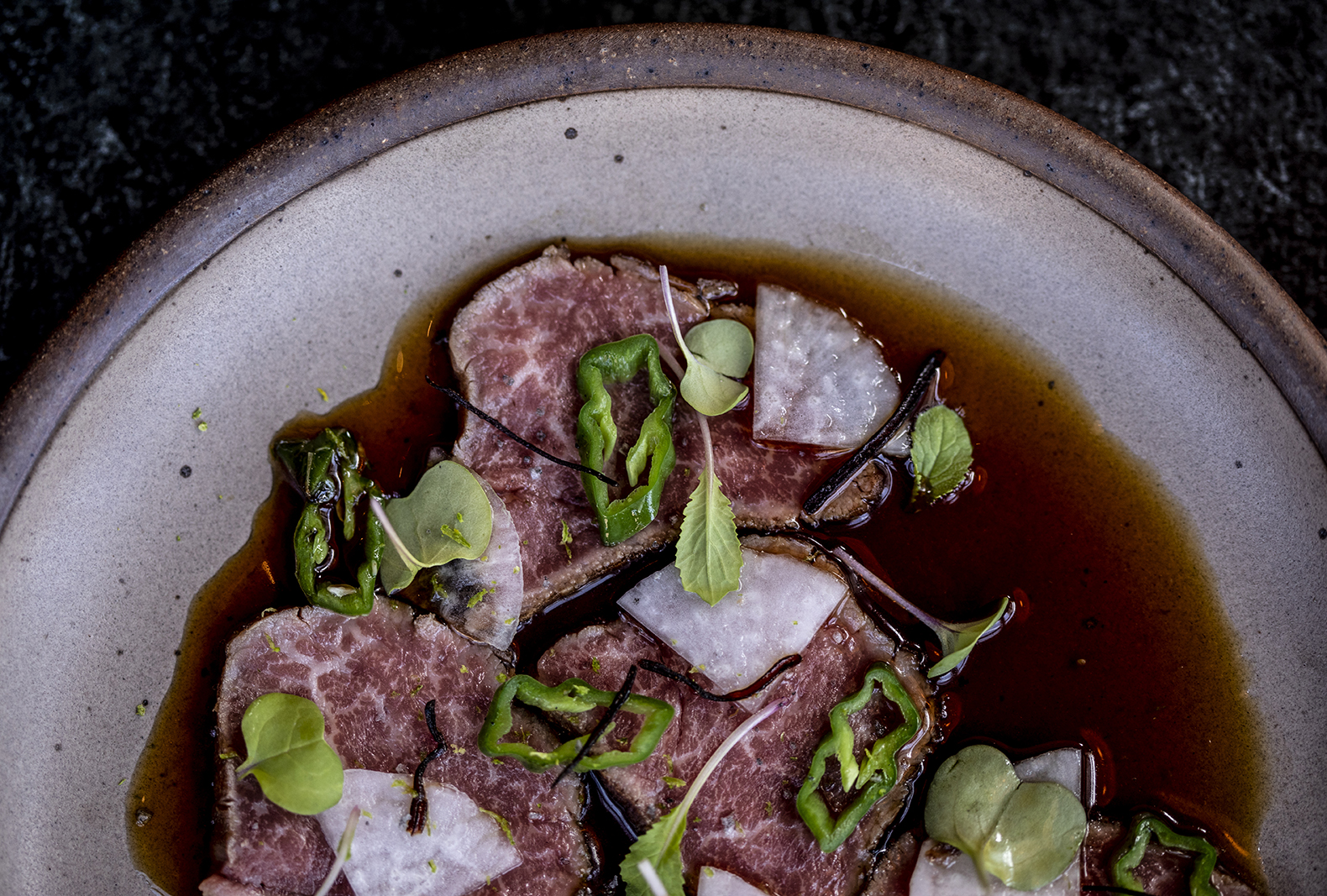 Harris said that, initially, they took it week by week, but they kept having good weeks, so they kept going.

“That was a good opportunity for me to make some relationships in the city and figure out the supply chain issues,” Harris said. “And because I was able to help support some of my usual fish brokers during that time, they were willing to work with me here in Atlanta, which wasn’t as big of a market for them.”

Convinced that the omakase deserved its own home, Castellucci and Harris found a 1,500-square-foot space and opened a brick-and-mortar location in February of this year called Mujo. The restaurant has 15 seats and serves 30 total guests per night, with four seatings staggered across the evening. Dinner includes 15 to 16 courses, plus optional supplements, and costs $205 per person. 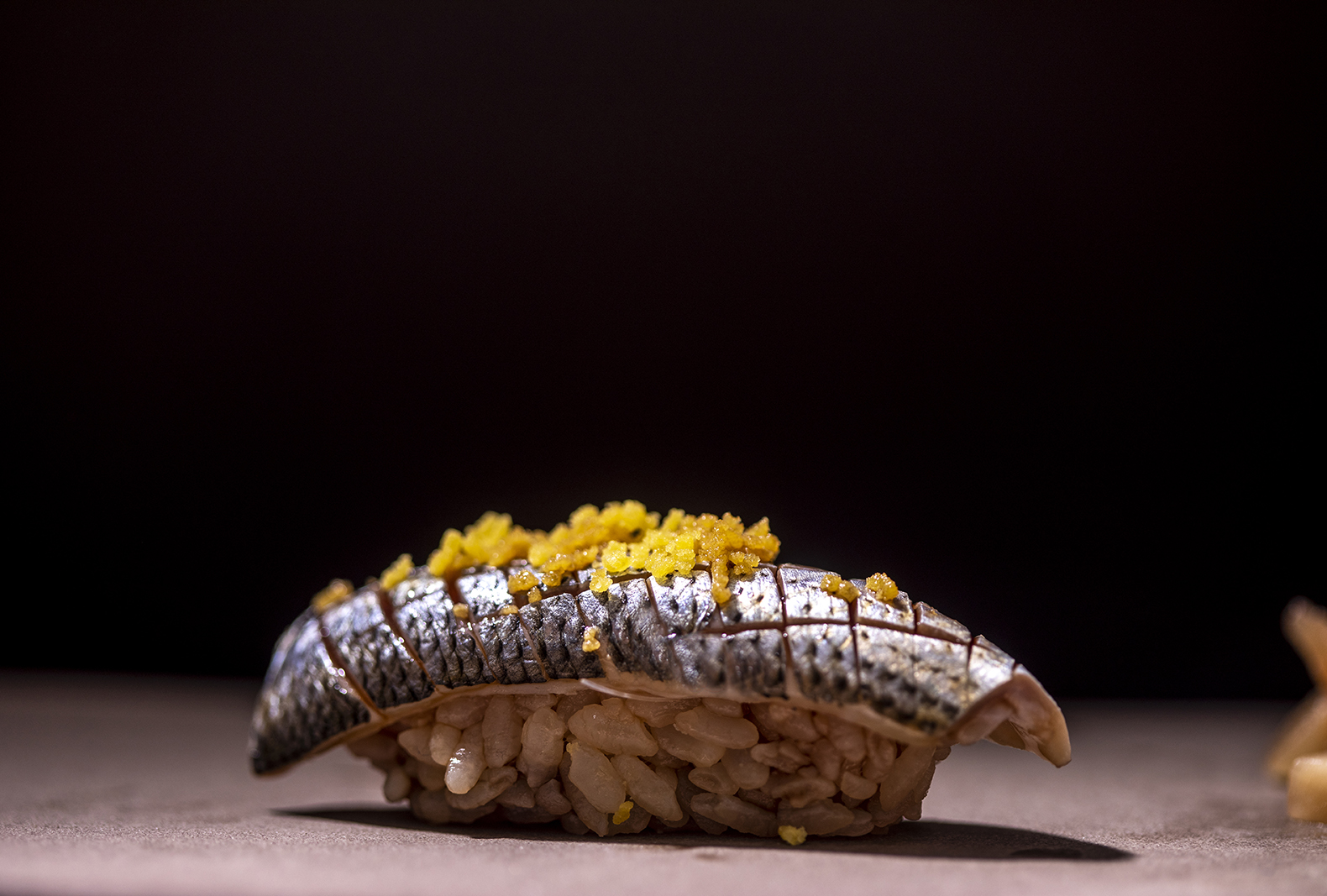 The omakase menu spotlights edomae-style sushi, which is characterized by fish that is marinated and cured to maximize flavor. Small plates, including cooked fish and vegetables, complement the nigiri, and the dishes feature a few modern touches. “It’s our point of view, but respectful to tradition,” said Harris.

Harris honed his skills in New York, working at Shuko and the Michelin-starred Sushi Ginza Onodera. But he said the move to Atlanta felt natural, as the clientele in his new hometown has a lot in common with New York, where omakase is much more common. 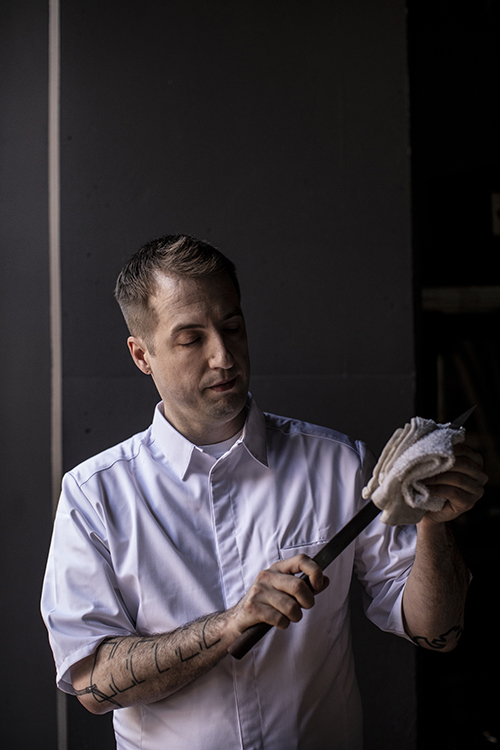 “Atlanta is a vibrant city, and the people here have really embraced us,” he said, noting that no one balks at the price because they’re getting a lot for their money. “And even if the food is less familiar to someone, the hospitality and environment are still really comfortable.”

Both Harris and Castellucci noted that, in Japan, omakase restaurants can feel austere; they’re often quiet and formal, with no music. And while the food is rightly the star of the show, drink offerings are typically limited. They wanted to change that.

Mujo plays music, and beverage pairings are available with the meal. Guests can begin or end their evenings at a small bar, sipping cocktails, wines and sakes. Castellucci said the bar was an important component to the team when they were designing the space, as they wanted to ensure guests felt welcome and comfortable, and could enjoy an experience in addition to the food. The restaurant also plans to open a small private dining room in the near future.

Castellucci Hospitality Group owns and operates a handful of popular restaurants in the Atlanta area, including The Iberian Pig, Bar Mercado, Double Zero, Cooks and Soldiers, and Sugo. Most of the restaurants lean Italian or Spanish, but Castellucci said that with every opening, he sets out to do something that is creatively exciting and that brings a new element to Atlanta. Given his personal interest in omakase, he was very passionate about this project, but he also felt that omakase was an obvious hole in the city — a hole that he and Harris could fill with Mujo.

So far, he’s right. Though it’s only a few months old, Mujo serves a full house each night and has proven to be one of the hottest tables in town — monthly reservations fill up within minutes.

“Over the years, the concepts where we’ve been most successful were departures from what Atlanta was offering at the time,” said Castellucci. “That helps us have long-term success in the market.”