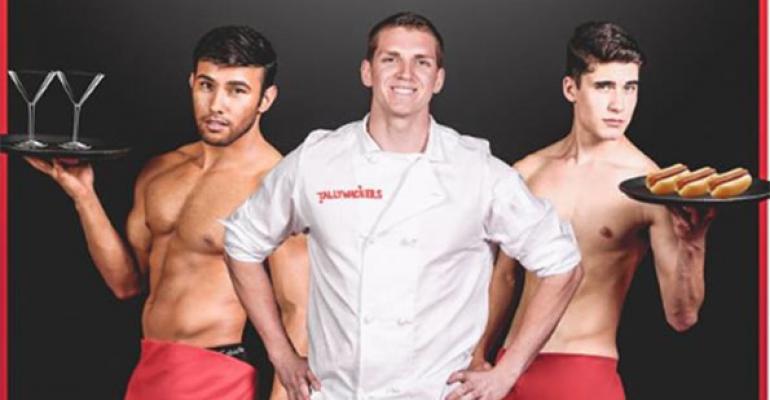 <p>The bare chests are for promotional purposes only; Tallywackers servers will be clad in skin-tight tees and shorts.</p>
Trends>New Restaurant Concepts

Scoff if you want at Tallywackers, the all-male Hooters knockoff scheduled to open in Dallas later this month. The evidence so far suggests it could become one of the hottest concepts to hit the industry in years. Even before serving its first meal, the place has generated a ton of publicity and buzz on social media and owner Rodney Duke says he has fielded multiple unsolicited inquiries about franchising, sight unseen.

Duke’s idea is simple: attract a predominantly female clientele by replacing Hooters Girls with ogle-worthy male servers while keeping everything else more or less the same. Two minor points of difference: The Tallywackers menu will be a bit lighter than the wing- and burger-centric bro-food approach taken by Hooters. And it won’t be a sports bar per se; Duke plans to present live entertainment on the weekends instead.

But that’s it for changes. Why tinker with proven breastaurant format? Growth has been hard to come by lately for most casual dining operators, but not the ones in this subsegment. Hooters has found success not just in the U.S., where it has 339 units, but in 26 additional countries around the world ranging from China (6 units) to the Czech Republic (2 units). Its direct competitors—Tilted Kilt (100-plus units) and Twin Peaks (66 locations)—are growing rapidly, too. Duke is merely taking a winning formula and reimagining it for female restaurant-goers who haven’t had this type of dining option before.

Not a believer in the power of social media to give a restaurant instant visibility? Consider what happened with Tallywackers. All the attention flows from a single help wanted ad that appeared on Craigslist on April 18. That quickly led to a short interview on the Kidd Kraddick morning radio show in Dallas. Next Tallywackers got a mention in a Jimmy Fallon monologue, quickly followed by an article in USA Today.

The free publicity binge has continued from there. It’s remarkable, because the restaurant has yet to open its doors. The place is just an abstract idea at this point, yet it has attracted 21,000 ‘likes” on Facebook, although there is technically nothing to “like” until the opening. There are just plenty of people who think Tallywackers sounds like a winning idea.

Images on the restaurant’s Facebook page depict bare-chested servers, but those are models posing for preopening publicity photos. Actual servers will be be clad in tight t-shirts and “boxer-brief-style shorts.” Will that be enough beefcake to create the intended atmosphere? Duke is betting it will, and thinks there are plenty of patrons who crave a breastaurant-type experience that speaks to their gender preferences. He’s sitting on a gold mine if he’s right. Stay tuned.