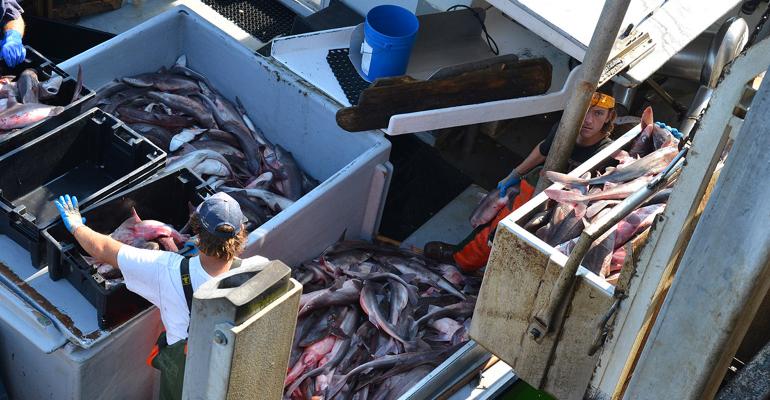 Selling the story of underutilized fish

Storytelling is a vital part of getting underutilized fish onto more menus.

Increasing consumption of underutilized fish is good not only for the oceans and the planet, but for restaurant operators and the fishing industry alike.

Travis Riggs is supply manager at Sea to Table, an organization that connects restaurants and college dining operations to fishermen. His job entails talking to fishermen, hearing what’s going on at the docks, then going into kitchens and sharing that story with chefs.

Take the case of the mullet, which is prized for its roe, called bottarga.

“Bottarga’s a very big thing in Europe,” Riggs said. “One ounce could go for $80. There’s not a lot of fish left in the Mediterranean, and we have a sustainable mullet population in the U.S. South.”

Female mullets are valued for their bottarga, which is exported to Europe at high prices. The male mullets are bycatch. Sometimes they are dumped back into the water, with thousands washing up on Florida’s shore.

“The market demands this product, but wouldn’t take the other side of it, the males,” Riggs said. “It’s all about market demand.”

At Olmsted, a hot restaurant in Brooklyn, N.Y., chef Greg Baxtrom is making mullet cool for perhaps the first time. He seeks out male mullets and creates dishes like mullet tartare with cranberry chimichurri, juniper-berry labneh and lavash crackers.

“On the East Coast, cod is in their blood,” Riggs said, describing fishermen whose ancestors valued cod so much they gave rise to places like Cape Cod, Mass. “But we’d been fishing cod really hard for a long time, to the point of collapse.”

Sea to Table found that dogfish were filling the biological void left by cod, and in fact there were too many dogfish, “making it hard for cod to rebound,” Riggs said. “So we put together a campaign to get people more aware of dogfish.”

Last fall, Sea to Table brought foodservice directors, dining managers, chefs and students from Ohio State University, SUNY, UMass and Yale on board — literally. The group tested their sea legs on the waters near Chatham, Mass., watching fishermen catch dogfish and bring them back to the pier. They saw the dogfish processed at a packaging plant in New Bedford, Mass., and then feasted on dogfish at local restaurants.

UMass has been working with underutilized fish via Sea To Table for several years, most notably with a dogfish taco that’s a big hit each time it’s on the menu. UMass has already ordered more than 2,000 pounds of dogfish this year. Yale is no slouch, either, ordering 3,000 pounds of dogfish since November, and even putting it on the Thanksgiving menu.

The economic impact is real. Large, noncommercial operations like UMass are in a position to move the needle not only in making dogfish more familiar, but by ordering so much of it.

“A group of dogfish fishermen may be just scraping by, getting 50 cents a pound and saying, ‘I can’t afford my gas to even go out and catch this,’” Riggs said. “So when we say, ‘Let’s get this into chefs’ hands,’ then the price will go up and we can go to the fishermen and tell them, ‘We’re going to try and sell this and get you a dollar a pound,’ which is still so much cheaper for the chef [than more popular fish species].”

When telling the story of underutilized fish, it’s important to think about how we refer to it. While the “trash fish” movement is doing a lot of good, voices in the fishing and food industries are calling for an end to that trashy term.

“So-called ‘trash fish’ dinners have become popular, but the term does a disservice to the ocean, and to fishermen,” Maria Finn wrote in Civil Eats.

Finn said when groups like Chefs Collaborative, a nonprofit that is working to build a sustainable food system, host beautiful gatherings of rockfish ceviche and black cod adobo tacos, they tarnish the whole image by dubbing the event a “Trash Fish Dinner.”

“’Trash fish’ sounds catchy, but it hurts more than it helps,” Finn wrote. “The term devalues the role of the animal in the ecosystem, and it kills any other market for them. In fact, it creates a problem for vendors that sell local seafood and community-supported fisheries.” “I’m not a fan of the term ‘trash fish,’” Mattel said. “Every fish that is handled properly can be really, really delicious. It’s a matter of having enough care, passion and experience to treat it in a way that optimizes the flavor.”

Mattel recommended looking at individual species of fish when deciding how to approach it on the menu, since “there are so many different fish, and every fish is distinct in its own subtle way.”

Fattier fish have a stronger flavor, as do more muscular species, like mackerel. Mattel’s rule of thumb for fattier fish is to add a hit of acid. He noted the classic French-style meuniere as a great place to start. “Meuniere” translates to “miller’s wife,” indicating a simple preparation. Fish is dredged in flour and sautéed in clarified butter until golden and crispy, then showered with brown butter, lemon and parsley.

Blander fish, like redfish, can work with the lemony, buttery method as well, but they can also carry stronger flavors.

“It becomes just the texture and mouthfeel of a protein, and you can treat it aggressively, with olives and capers, or make it really spicy, like blackened Acadian redfish,” Mattel said.

Mattel’s best advice for selling underutilized fish is training front-of-the-house staff to tell its story, offering an amuse bouche as a sample, and not being shy about marketing it as environmentally friendly.

Mattel also recommended the Seafood Watch app and Fish Choice website to stay up to date on the latest underutilized fish that might be the next big hit on the menu.