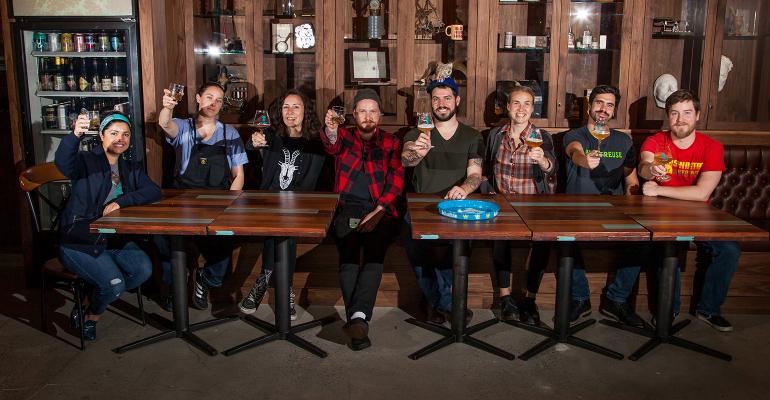 With today’s digital landscape, it’s become imperative that restaurant and bar owners put as much attention on their approach to social media as they do to the products they put on the plate. The real world has become intertwined with the online. While some restaurants employ social media experts, a wise operator can instead focus on a few simple, yet effective, strategies that cost next to nothing, yet create a valuable way connect with fans.

I recently spoke with Chris Elford, who along with his wife, Anu, own two beloved bars in Seattle: Navy Strength, a tiki-inspired concept, and No Anchor, a high-end beer bar. No Anchor has garnered much critical acclaim, including being named a Semi-Finalist for a James Beard Award for Best New Restaurant and Best New Restaurant from Seattle Weekly. Their social media efforts have played a big part in developing their long list of fans, which includes both locals and visitors to Seattle. “You can’t overlook social media,” says Elford. “It has the power to manage public perception.  We don’t have a press person, or money to advertise. We run the channels ourselves, so it’s free, and another skill to add to our quiver.”

Some businesses often ‘phone in’ their social media posts, and think of the platforms as solely avenues to promote a new special, or an upcoming event, but these posts often fall flat with viewers. Elford advises focusing on two things primarily: great photos and engaging copy.

“When you post on social media, it should provide a sense of: ‘This is who we are, so come by.’ I want people to get an idea of the personality of the bar.”

High quality photos and captions that use both positivity and humor resonate most with their online fans. Elford has photographers shoot a set of professional pictures that he can use over time. To keep that practice economical, he often pays them in trade.

Elford finds that pictures that not only show the beautiful food and drinks they offer, but the people who work at the bar perform well.

“One picture of our bar manager holding a tray of drinks has a hundred more likes than others. People love it as it’s all about personality,” he says.

“We’ll take pics of the staff, and say, ‘Here’s Seth and Abby, come hang out.’  You see them beaming with hospitality and it makes a personal connection.” Copy is also incredibly important. “It takes me longer to write the captions than pick the photos,” says Elford.  “And ask questions, as it engages people.  ‘Just tapped one of our favorite stouts. What are your favorite stouts?’”

Using hashtags is a must as it’s a way for people interested in what you’re serving to find your feed. Elford recommends keeping a “bank” of them on hand (storing them on his phone’s note function for simple cut and pasting) and building the list over time. Tags should be specific, and identify your neighborhood, the types of products you focus on (like #craftbeer), and the name of your bar, (#noanchor).

Also, tagging people is a great way to build connections. “Tag people constantly,” advises Elford. “So the people that follow them will see it. Also tag businesses. If we make a new drink, we’ll tag the brand, or the brand ambassador, even if they’re in other cities. A third of our guests live outside of Seattle, and they often come to see us, based on what they’ve seen on social media.”

Once you’ve built an engaged group of followers by posting authentic, relevant and entertaining content, you can sparingly use social media to promote upcoming events. You’ll also find devoted fans who support your efforts by sharing your posts.

For ticketed events, Elford begins promoting about a month out from the event, posting once a week, then more frequently in the final days of lead up.

“Most people don’t plan more than a week out. They’ll intend to come to your event, but if you don’t re-engage them in the week prior, they’ll often forget.”

If ticket sales are sluggish, Elford will occasionally pay to promote event notifications on Facebook, taking advantage of free offers the platform will offer from time to time.  For as low as $10 to $20 per promotion, he often finds good results, getting the last few seats sold.

“The general rule for bars and restaurants is to post around 1:30-3:00 pm as people are thinking about what to do after work,” he notes. “But now with the changing algorithms, your post may not show up for days. So I use Instagram Stories as it reaches people in real time.”

While many restaurant groups hire a devoted social media team, operators like Elford can run the show themselves, as long as their efforts are as consistent and as thoughtful as their food and drink offerings.  And at the end of the day, what you do online can showcase what you do in real life.

“Our job, quite simply, is to provide positive experiences and be a hopeful spot in our guests’ days. And there is a way to do that in social media. Have a voice, and have a message. People can feel that.”