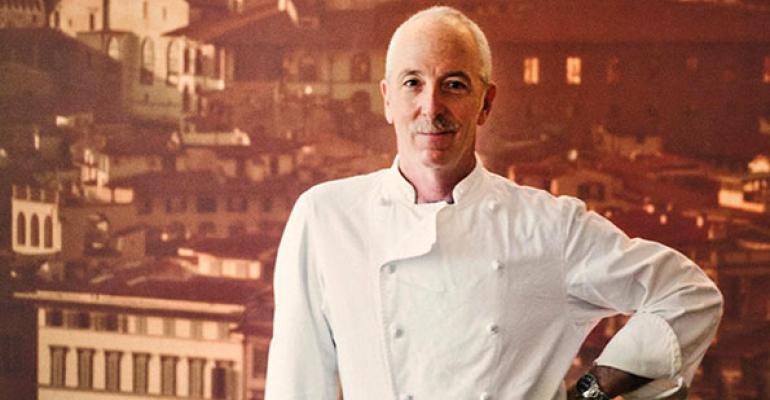 <p>Cleveland restaurateur Zack Bruell believes diners can limit overindulgence&mdash;splurge in moderation, as in once a week&mdash;and combine a diet with proper exercise.</p>
Operations>Marketing

There’s no better time to be a Cleveland restaurateur than right now. The city is in the midst of a complete overhaul—downtown residential occupancy is at record levels, the city was recently chosen to host the 2016 Republican National Convention and sports fans are welcoming back LeBron James, hoping he can bring the city its long-awaited championship parade.

The resurgence cannot come soon enough for Zack Bruell, who planted his roots as a chef and restaurant owner in his hometown of Cleveland in the early 1980s. Over his nearly 40-year career, Bruell has endured the city’s economic struggles and, despite them, has helped establish Cleveland as a dining destination.

Beyond food, Cleveland has built a reputation as a world-class location for hospitals and healthcare. The Cleveland Clinic, regarded as one of the top hospitals in the U.S., draws patients from all over the world. Which is why, when the Clinic approached Bruell to discuss a partnership revolving around healthy eating, he jumped at the opportunity.

Bruell is no evangelist for fat-free cooking. The menu at his French brasserie L’Albatros—with the likes of lardons, confits and Bouef Bourguignon—wouldn’t exactly be considered heart healthy. He believes in occasional indulgence. It’s a part of dining out, he says.

“My generation is trying to believe they’re going to live forever. We don’t,” he noted. “(Dining) is a luxury, it’s an enjoyment and it’s something that’s part of living.”

But he also believes diners can limit overindulgence—splurge in moderation, as in once a week—and combine a diet with proper exercise. He says people should make better choices related to what's on their dinner plates on a daily basis. So he teamed with the Clinic to place a selection of items that are approved by nutrition experts on the menus at his five fine-dining restaurants in Cleveland.

Designed by the hospital, the program is called “Go! Healthy” and the two parties worked together to create dishes cooked with foods containing minimal saturated fat, sodium and minimal added sugars and syrups, as well as with 100-percent whole grains and no trans fat.

Bruell believes there are ways to make healthier dishes still taste good. Using fresh ingredients is one key step, and chefs can use ingredients like acid—vinegars, citrus, etc.—to intensify flavors.

“The whole idea is that the food will explode in your mouth when it hits your pallet. That’s the goal on the culinary side,” Bruell describes. “There are ways to do that, to balance the fat by cutting through it with acid.”

Does Bruell believe in labeling healthier items on his menus?

While Bruell notes the Go! Healthy dishes are selling well, he doesn’t shy away from acknowledging the marketing aspect of the partnership.

“They wanted the exposure to the dining public because they have never done this in restaurants outside of the Clinic settings,” he says, “and I knew we would get a lot of exposure by being the first in the U.S. to do it.”

Bruell also is quick to point out he wasn’t going to change his concepts for the partnership.

“I told them, ‘I use salt and butter, everything you don’t use, but I think my food is healthy,’” he says. “I reiterated that I wasn’t changing my menus because I wanted to stay true to what our concepts are.”

Instead, the two parties decided on adding prix fixe meals to the menus at Bruell’s upscale locations: Chinato, L’Albatros, Cowell & Hubbard, Parallax and Table 45. Bruell anticipates the menu items will last through the year and then the two parties will evaluate moving forward.

As far as Cleveland moving forward, Bruell says he’s always believed the city would have its day.

“I’ve been committed for years and it’s coming to fruition,” he says. “I could see it happening, but we’re not there yet. For me, it can’t happen soon enough.”