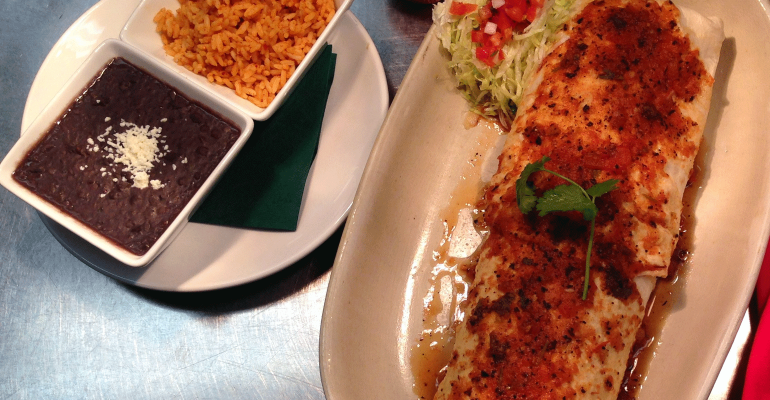 Other discounts and free burritos mark the occasion

National Burrito Day, celebrated annually on the first Thursday of April, falls on April 5 this year. In preparation for fans of the food holiday, restaurant operators are lining up discounts, deals for free burritos and even a charitable initiative. See the burrito-centric promotions, including one that is so hot that customers need to sign a legal waiver to order. The quick-service operator, based in Costa Mesa, Calif., with over 470 units, will celebrate National Burrito Day with a buy-one, get-one-free deal on burritos of equal or lesser value on April 5. Guests can access the coupon for the promotion online. At any Dos Toros location, the first 50 guests who purchase a burrito on April 5 and post on Instagram using the hashtag #BurritoSelfie will receive a free burrito. The New York City-based fast-casual chain currently operates 14 units in its home city as well as one unit in Chicago. The restaurant is offering an off-the-menu special — the Cinco Chiles Burrito — a spicy three-pounder with five different kinds of chili peppers. Guests will have to sign a legal waiver before they can order it. Soltoro is located at Mohegan Sun in Uncasville, Conn. Headquartered in San Diego with more than 200 stores, this fast-casual brand will roll out its new Chipotle Chicken Ranch Burrito starting April 4 for a limited time. The new menu item features chicken, fire-roasted corn, rice, black beans, crispy tortilla strips and chipotle ranch sauce wrapped in a flour tortilla with melted cheese. On April 5, Rubio’s will offer any burrito, including this new addition, for $5 all day long with the purchase of a drink. Del Taco, which is based in Lake Forest, Calif., and operates over 560 locations, will treat burrito lovers to a free small order of its crinkle-cut fries when they redeem a two for $5 Classic Burritos deal on April 5. On April 5, the Austin, Texas-headquartered chain, which operates more than 70 units, will offer customers who buy a burrito with a coupon for a free one the following week. For National Burrito Day fans, Curry Up Now, one of NRN’s 2018 Breakout Brands, offers an Indian twist on the classic with its Tikka Masala Burrito — turmeric rice, chana garbanzo masala, sliced onions and chicken or paneer tikka masala wrapped in a flour or wheat tortilla for $10. The restaurant operates six locations in the San Francisco Bay area. Several Los Angeles-based restaurants and bars are partnering with Greenbar Distillery and The Burrito Project, an organization that feeds the homeless in Southern California, to celebrate the burrito in a philanthropic way. For the whole month of April, Greenbar will donate a burrito to the charitable cause for every guest that orders a cocktail using its City Bright Gin at a participating restaurant or bar. Headquartered in Folsom, Calif., Jimboy’s Tacos will offer its Bean & Cheese Burrito for only $2 all day on April 5. The restaurant currently has over 40 units.

‘Meals on Heels’ brings the dine-in experience to delivery
Nov 17, 2020