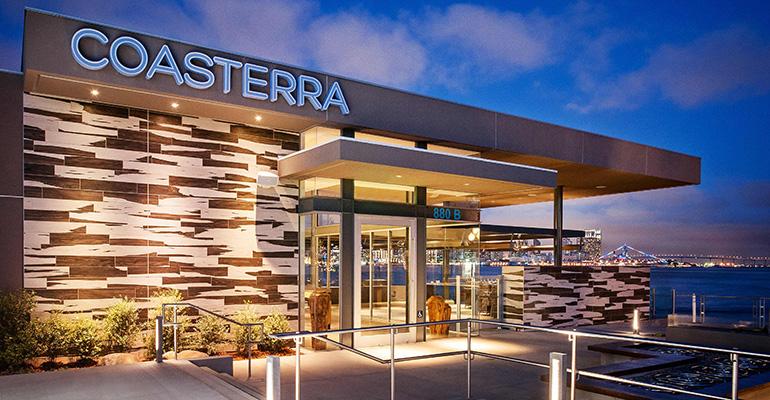 <p>Coasterra has extensive outdoor space with views of the San Diego Bay.</p>
Operations>Management

On the Eastern tip of Harbor Island, a peninsula on San Diego Bay, the new restaurant Coasterra is harnessing the power of the sun.

The 300-seat Mexican waterfront restaurant, which opened in August after a $15 million renovation by the Cohn Restaurant Group, has an expansive patio shaded by glass photovoltaic solar panels that generate about 33 percent of the 28,000-square-foot facility’s energy needs.

In a couple of months, Cohn Restaurant Group will attach a new floating event pavilion to the restaurant. Designed to accommodate up to 500 more people, the pavilion will also have the solar canopy.

David Cohn, the group’s co-founder, says the company has invested about $1.5 million alone in what will be about 10,000 sq. ft. of solar panels.

It’s an investment he estimates will take about seven years to recoup, including a rebate and tax credit available for solar investments.

“That’s not quick,” he says. “But you have to keep in mind we would have had to come up with an alternative shade structure. It’s an investment in the future of rising electric rates.”

Cohn has long strived to build the group’s 24 restaurants in as green a style as possible, and his other restaurants are moving toward using conventional solar technology where they can.

The Coasterra project was made more expensive by the choice of the more-transparent solar canopy made with LSX modules, which keep out rain but allow ambient light through in a way that casts attractive geometric designs on what’s underneath, reminiscent of light filtering through tree branches, Cohn explains.

The panels were made by Boulder, CO-based Lumos Solar, which specializes in building solar systems integrated within a structure’s design.

More conventional solar panels would have cost less, Cohn says, but the more-elegant LSX modules better suited the mostly outdoor space, which sees full-on sun most of the year.

“Had we put in normal solar panels, we would have had a very dark patio during the day and it would have felt closed in,” Cohn explains. “The truth is, if anyone’s looking for simply a quick payback, it doesn’t work with these panels. But it may work with more conventional panels.”

San Diego has among the highest electric rates in the country, Cohn says. So the investment made sense for the Cohn group.

Considering solar technology for your restaurant? Cohn reckons it will likely only make sense if you have a long-term lease of close to 20 years. The technology is advancing rapidly, he adds, and those costs will likely drop.

“The next step we’re looking into is to be able to install a battery to store power we create that can be used on less sunny days or at night,” he adds.