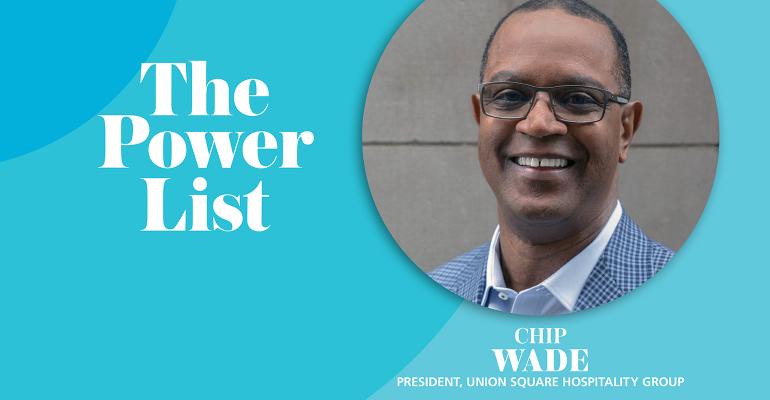 Inspired by the Black restaurant CEOs he saw while he was at Darden in the early 2000s, Chip Wade knew he could make it to the C-suite.

He was named president of New York-based Union Square Hospitality Group, or USHG, in April 2019, reporting directly to founder and CEO Danny Meyer. The group includes acclaimed concepts, such as Union Square Café, Gramercy Tavern and Blue Smoke, and at the time was expanding to other cities.

But 2020 brought extraordinary challenges: A pandemic. Restaurant closures and layoffs. The killing of George Floyd and others by police and a national outcry for justice.

Through it all, Wade led with compassion.

“Chats with Chip,” a video chat series for USHG employees, took off during COVID-19. These chats between Wade and employees across the company allowed him to hear from everyone, and even show vulnerability.

“The death of George Floyd had a significant impact on me as an individual, as a Black male with two sons,” Wade said. “I am comfortable enough with my style and my leadership that on two different occasions [on the chats] I broke down and just began to cry.”

Wade said he knew he didn’t have all the answers. He brought in Dr. James Pogue II, an inclusion and bias consultant, to direct the company’s long-term response and reshape policies.

Research has suggested that people prefer to promote someone who looks like them rather than hire someone who is equally qualified and is a different race or gender. Wade said he is actively attempting to dismantle that tendency.

“It is unfortunate there are too few African American leaders in our industry, so for me, it is a very personal issue,” he said. “At the end of the day, you have to walk your talk, and I try to do that.”